HOWARD — Most people in northeastern Wisconsin know Amy Hanten because she’s been an on-air personality with WLUK-TV Fox 11 for 25 years. But what they may not know is that Hanten, born and raised Catholic, has a deep devotion to her Catholic faith.

Hanten, who was born in Petoskey, Mich., is a member of St. John the Baptist Parish in Howard, along with her husband, Bob Sweeney, and their two children, Riley, 23, and Ireland, 18. Hanten attended Catholic grade school in Florida and Arizona. 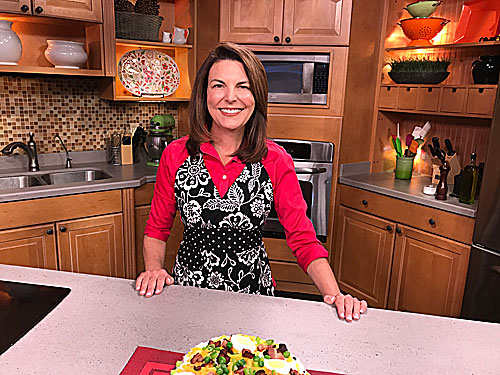 Amy Hanten, known to television viewers for her cooking show, “Cooking with Amy” on WLUK-TV Fox 11 in Green Bay, encourages parents to cook with their children. Hanten is a member of St. John the Baptist Parish in Howard. (Amanda Lauer | For The Compass)

“I fell in love with Catholic school,” Hanten said. “We had nuns, we went to Mass weekly, we wore uniforms. I didn’t grow up with a big family, and for me it was like family.”

There weren’t any Catholic high schools in Scottsdale, Ariz. “I fought tooth and nail to go to a Catholic high school. For me it was very important to get a good education and practice my faith and be surrounded by other people with the same faith,” Hanten said. “There was a girls’ Catholic high school (Xavier College Preparatory) in Phoenix, so I took two busses with a transfer every single morning. It took me about an hour and a half to get to school.”

Looking for that same experience in college, Hanten enrolled at Marquette University in Milwaukee. “Marquette felt like family. Once again, I was taught by Jesuits, many of them. I was able to go to Mass on Sundays and meet other people of like faith and family. It’s been very important to me throughout my life.”

While attending Marquette, Hanten was able to pursue her lifelong dream of becoming a news reporter. She had an internship at a television station in Milwaukee for a year and then her junior year took a full-time job with WISN-TV. After graduating with a degree in broadcast journalism, Hanten took an on-air job at in Zanesville, Ohio.

From there, Hanten worked at three other stations before accepting a job at WLUK-TV Fox 11 in Green Bay. She contacted a local parish to find a place to rent and they found the ideal place for her through a family in the parish.

Hanten tapped into her church community again when her first child was born. “I put an ad in the church bulletin (seeking child care) and sure enough, a woman came into our lives,” Hanten said. “She was with us while the kids were growing up and she was like a grandmother to our children. She would help bring the kids to school and go to Mass. I couldn’t have found her without the Catholic Church.”

A deep commitment to her faith helped Hanten stay grounded in what she said can be a very cutthroat business. “As a news anchor I had to anchor through some very tough times. I had to anchor through 9/11,” she said. “I was a mom and a wife more than anything, but yet my job was to be on set and be calm and keep it together and tell our viewers everything would be ok. That was a moment in time where I had to have my faith.”

That strong faith has been passed along to Hanten’s children. They both attended Catholic grade schools and are graduates of Notre Dame Academy in Green Bay. Hanten is grateful for the wonderful teachers her children had.

“I am busy so I can’t do as much as some moms and dads, but one of most rewarding things I’ve done is to cook meals for the teachers,” she said.

Over time Hanten transitioned out of an anchor role at WLUK-TV Fox 11. She will soon be starting season nine of hosting her own cooking and lifestyle show on WLUK called “Fox 11 Living with Amy.” The show has been a perfect fit for her. “I’ve always loved to cook,” she said. “My grandmother was an amazing cook and was known for entertaining. I practically grew up in the kitchen with her.”

With a treasure trove of what she calls “real recipes for real busy people,” Hanten wrote a cookbook in 2010 called “The Cooking Mom: Recipes, Secrets & Stories to Get Your Family Back to the Table.” That was the start of her business, The Cooking Mom.

Hanten travels around the country doing presentations on television and radio stations promoting her mission of getting people cooking again and bringing families back to the dinner table. In 2013, her second cookbook, “The Cooking Mom Cooks Up Memories,” was published.

This mission is also highlighted on Hanten’s website, thecookingmom.com. She writes a blog and posts new recipes on the site every week. Plus she has a newsletter.

Eating together as a family doesn’t sound that difficult, but Hanten realizes people are busier than ever. She encourages families to make a habit of eating together, even if it’s just once or twice a week to start.

She also encourages parents to cook with their children.

“Teach your kids how to cook, get them into the kitchen early,” she said. “One of the most rewarding things for me is to cook with my daughter on the weekend, even though she’s a teenager and she’s busy. I always say it’s not just about cooking, it’s about cooking up memories and learning together, trying new things together.”

Hanten said she’s a big believer in making things from the heart.

“If you know somebody in your office who’s going through a tough time or a new neighbor has moved in, welcome them by bringing over a casserole,” she said. “I loved sending cookies to my daughter’s lunch table when she was in high school and sending stuff to my son’s dorm. The bottom line, my way of showing love is cooking.”