GREEN BAY — Young adults from around the diocese are doing their best to recreate the 1993 film, “The Sandlot,” every Saturday night at 6 p.m. at Annunciation Parish. This weekly kickball game provides a place for young people from all over the diocese to get together, have fun and meet new people.

A recent addition to the busy summer schedule, the kickball game was started with the intent of building community among young adults. Fr. Michael Thiel, associate pastor for the Quad Parishes in Green Bay, said the idea started with “me looking out my window and seeing an empty field. I realized we had this great field that would be perfect for kickball.”

A group of young adults, including Fr. Thiel and Sarah Bradford, who helps with young adult ministry in Green Bay in addition to her position as communications coordinator of the diocese, discussed the idea of a weekly kickball game for a while before turning that idea into reality.

“We kind of pictured ‘The Sandlot,’ where you have this ragtag group of people showing up for each other and they become this amazing community,” Bradford said. “We were just trying to figure out something that we could have consistently, every week, that was a really easy invite for people.” 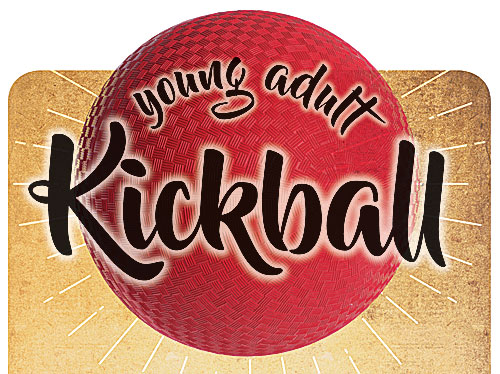 The group meets every week, rain or shine. Turnouts have ranged from 10 to 30 people, always enough to form two teams. While they have not been rained out yet, the group reserves the parish hall of Annunciation on Saturday night, just in case.

Attendance at the kickball game is constantly changing. “We’ve had a variety of different people,” Fr. Thiel said. “We’ve had new people every week. We’ve had people just from the neighborhood (because they) saw some of the signs.”

While the main purpose is to play kickball and get to know other young adults, there is more to it than meets the eye.

“We are working on discipleship in the diocese, trying to find creative and new ways to reach out, and not being afraid to try new things,” Bradford said. “We were just trying to create easy access points for people who aren’t plugged into a parish, who don’t want to go to Bible study, who might not want to go to a holy hour or (eucharistic) adoration. Something that would connect with people on a really basic level, like sports and food and making friends, because who doesn’t like those things?”

“It’s about making connections, getting people, winning their hearts so to speak,” Fr. Thiel said. “Just introducing people to one another and (to) other opportunities to continue to form people, to form young adults.”

While it’s a young adult event, families are encouraged to come. Bradford said the group is “trying to create an environment where young adults with families are supported and welcome, making them family friendly, trying to include the kids when we’re playing, or getting them to cheer with us, just making sure that they’re not lost amongst the young adult group.”

Participants are encouraged to bring snacks to share. The group grills out once a month as a means to build a spirit of community and boost camaraderie.

“I hope that eventually it’s an entry point to discipleship,” said Fr. Thiel. “It’s happening on church property and happening with a lot of church people, but it’s not just Catholics who are coming. We’ve had neighbors who are coming as well. I hope that it’s not just relationships with one another, but that it leads towards relationships with Jesus.”

Kickball will be held every Saturday of July and August at 6 p.m. at Annunciation Parish, 401 Gray St., Green Bay.