The pilgrimage to Ireland will depart Chicago on Sunday, Sept. 24, and arrive in Dublin on Monday morning, Sept. 25. From the airport, pilgrims will travel north along Ireland’s oldest inhabited areas and arrive in Drogheda. Here, Bishop Ricken will celebrate Mass at St. Peter Church, where relics of St. Oliver Plunkett are venerated. 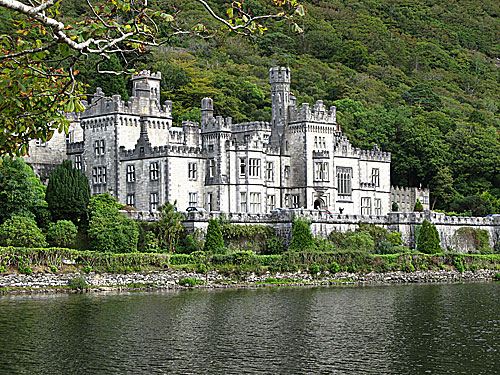 Kylemore Abbey, a historic mansion now belonging to a community of Benedictine sisters near Connemara National Park, is one of the destinations Compass pilgrims will visit during a 12-day pilgrimage next fall. (Stock photo)

Following Mass and sight-seeing, the group will depart for Monasterboice, a monastery founded by St. Buithe, who died in 521. At Monasterboice, pilgrims will have a chance to view one of the finest Celtic crosses in Ireland. The last stop on the morning excursion will be to the Hill of Slane, one of Ireland’s most historic Catholic sites.

According to tradition, the Hill of Slane is where St. Patrick, after having lit a fire during the pagan “night of darkness,” evangelized the natives and their king regarding the Blessed Trinity, using a simple shamrock. It led to their conversion. Pilgrims will then travel to Northern Ireland to visit the site of St. Patrick’s tomb in Downpatrick, which also houses the remains of St. Bridget and St. Columba.

The day will end in Newry, where pilgrims check into their hotel to enjoy a welcome dinner at Canal Court Hotel and Spa.

On Sept. 26, the group will travel to Armagh and Knock. The first stop will be St. Patrick Cathedral in Armagh, seat of the archbishop primate of Ireland.

The cathedral, completed in 1873, is perched on the hilltop and dominates the skyline. Pilgrims will celebrate Mass at the cathedral before traveling west to County Sligo.

While at County Sligo the group will pray a Chaplet of Divine Mercy at the famous Mass Rock, known as the place where priests celebrated Mass secretly during times of persecution. It serves as a place that commemorates all those who persevered in practicing their faith.

The next stop will be at the famous Marian Shrine of Knock, where the Blessed Mother appeared to 15 people on Sept. 21, 1879. The group will recite a rosary at the shrine before arriving at their hotel in Knock, where they stay for two nights.

Following breakfast on Sept. 27, the pilgrims will enjoy a day at the Shrine of Knock. Mass will be celebrated at the apparition site, followed by opportunities for confession, recitation of the rosary and time to explore the shrine grounds. 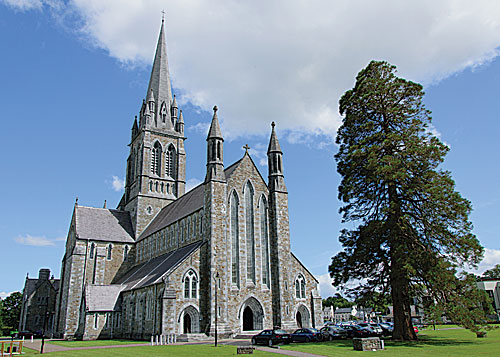 On Sept. 28, the group travels west to County Mayo on a panoramic drive to Westport, the largest emigration port city on the northern half of Ireland. After Mass, the group continues its pilgrimage to Croagh Patrick, where St. Patrick stayed for 40 days of penance. Here, with its view of Clew Bay and the Atlantic Ocean, the group makes a partial climb along the mountain, praying the rosary. The  next stop will be Kylemore Abbey, a historic mansion now belonging to a community of Benedictine sisters and nestled in the woods near Connemara National Park. A Mass will be celebrated at the abbey.

A scenic drive through the Connemara region will give pilgrims a chance to see the “Famine Way” and the Monument to the Famine, which recalls the greatest suffering times of the Irish people. Pilgrims will stay overnight at the Connemara Coast Hotel.

On Sept. 29, pilgrims will depart for Moycullen to visit the Connemara Marble Factory, then continue to Cong, a small village made famous by its depiction in the movie, “The Quiet Man.” It is also home of the Cong Abbey. Mass will be celebrated at St. Mary of the Rosary Church in Cong.

The next stop will be Galway City, overlooking Galway Bay, where the remaining day will be spent on independent activities and dining before returning to the hotel in Connemara.

On Sept. 30, pilgrims begin the day with Mass at the Galway Cathedral, then travel through the Burren country, an area of rocky limestone hills, and then cross the Shannon Estuary in a ferry to Tarbert. Once in Tarbert, pilgrims will travel by bus to Killarney in County Kerry, where they will check into a new hotel and enjoy an evening dinner.

Mass on Sunday, Oct. 1, will be celebrated at St. Mary’s Cathedral in Killarney. Most of this day will be spent witnessing the natural beauty by bus, driving 100 miles around the scenic route known as the Ring of Kerry. The day will conclude back at the Europe Hotel and Resort for dinner.

Pilgrims will depart County Kerry on Oct. 2 and travel to County Tipperary, where they will visit the Rock of Cashel Castle, known as the seat of the High Kings of Ireland. After touring the castle, the group will visit the Franciscan Friary and celebrate Mass at St. John the Baptist Church in Cashel. A visit to Jerpoint Abbey will give pilgrims a chance to learn about early Cistercian monastic life in Ireland. The day concludes with a visit to the restored medieval city of Kilkenny, with its famous castle and streets. Dinner and overnight accommodations will be at Kilkenny’s Newark Hotel.

On Oct. 3, the pilgrimage will continue in County Wicklow, known as the garden county of Ireland, to see the sixth-century monastic ruins of Glendalough. Nestled in a valley surrounded by the mountains of Wicklow, Glendalough offered monks the desired peacefulness for contemplative prayer.

The settlement was founded by St. Kevin and St. Lawrence O’Toole made it famous during the time Christianity was burgeoning throughout Ireland. Now mostly abandoned, the ruins of numerous tombs, chapels, Celtic crosses cover the landscape.

After this visit, the group transfers to Dublin City and Trinity College, home to one of the world’s most famous copies of the Holy Scriptures, known as the “Book of Kells.” Sometimes they also exhibit the “Book of Armagh” containing the confessions of St. Patrick. Mass will be celebrated at White Friars Church, followed by dinner and overnight stay at the Ballsbridge Hotel.

Pilgrims will begin their day Oct. 4 with a panoramic drive of Dublin City, featuring views of St. Patrick’s Cathedral, Christchurch Cathedral, Dublin Castle, O’Connell Street, among other places. A stop at St. James Gate will give pilgrims a chance to enjoy one of Ireland’s most famous beverages, Guinness. The group then visits White Friars Church to pray before the relics of St. Valentine and then celebrate a farewell Mass.

Cost of the pilgrimage to Ireland is $3,999 until April 28. A deposit of $500 must be made to reserve the price. After April 28 the cost is $4,099 per person. Pilgrims will depart from Chicago’s O’Hare International Airport. An optional roundtrip coach departing from Green Bay is available for an additional $70.

For more information, to request a brochure or to reserve a spot on the pilgrimage to Ireland, contact Amy Kawula, (920)272-8212; [email protected]