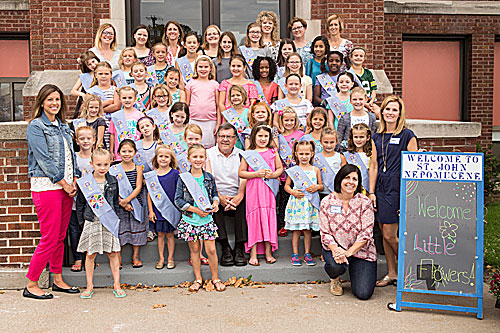 Members of the Little Flower Girls’ Club, a Catholic group for mothers and daughters from St. John Nepomucene Parish in Little Chute, stand outside St. John Nepomucene School following the group’s first fall meeting Sept. 17. This year, 33 girls are enrolled in the parish program. Also pictured are program leaders and helpers who completed the program and Deacon George Schraufnagel, who blessed petals and sashes distributed to the girls. (Kathy Weigman | For The Compass)

LITTLE CHUTE — “Mother knows best” is a saying that has been put into action by a group of mothers and daughters from St. John Nepomucene Parish. The Little Flowers Girls’ Club focuses on building relationships between mothers and daughters by concentrating on important virtues and female saints.

Little Flowers is modeled after St. Therese of the Little Flower and based on “The Catholic Girls’ Guide,” a book written by Fr. Francis Xavier in 1906. Designed for girls from kindergarten to fourth grade, each Little Flower is given a light blue sash, called the Blessed Mother sash, onto which flower petals are sewn in the shape of a wreath. These flower petals are earned by the girls at their monthly meetings upon completion of learning a saint and an attributing virtue.

“I heard about the (Little Flowers) program, and it just kept coming back to me,” said Debbie Van Boxtel, who helped start the Little Flowers program in Little Chute. “It was always something I really wanted to do with my daughters.”

After watching an informational CD, she began talking to other mothers from her parish, spreading the word about the program and getting feedback. What started as casual conversations in the parking lot after Mass soon developed into genuine interest in the program. In 2013, Debbie and a few other mothers from St. John Parish approached the Knights of Columbus for start-up funds. In September of 2014, the first Little Flowers meeting was held.

Little Flowers is a three-year program that runs for nine months out of the year, from September to May. There is one meeting a month, focusing on a different saint and virtue each time. “They make a different scrapbook regarding each saint,” Van Boxtel said. “So after three years they’ll have a binder full of different saints that they can go back and look at their virtues.”

In addition to the monthly meetings, each year the girls are given a workbook. The workbook is filled with activities relating to the saint and virtue for that month.

“They’re asked to do, depending upon their age, five out of 10 tasks that are associated with that virtue,” Van Boxtel said. “They complete that virtue and the guide is signed by a parent and they bring that back to the next meeting.”

The active presence of the mother, or a woman figure, is an important part of the program.

“The mother’s role is actually to help her child learn the virtue and to just be involved,” said Van Boxtel. “The mothers often come and they’ll help their child and other children with the different virtues and they play games and do scrapbooks.”

Just a few years in, the Little Flowers program is growing. “Little Flowers is meant to be a small, intimate group with mothers and daughters,” Van Boxtel said. With registration numbers on the rise, Van Boxtel, although no longer in charge of the group due to her daughter’s age and completion of the program, believes the Little Flowers club will keep gaining popularity. “It is catching on,” she said.

To learn more about the Little Flowers Girls’ Club, visit their website at www.beholdpublications.com.