APPLETON — On Nov. 18, Fr. Solanus Casey, who was born in Wisconsin, will be beatified at a Mass in front of more than 66,000 people at Ford Field in Detroit. Fr. Casey is only the second American-born man to be honored with such a distinction. 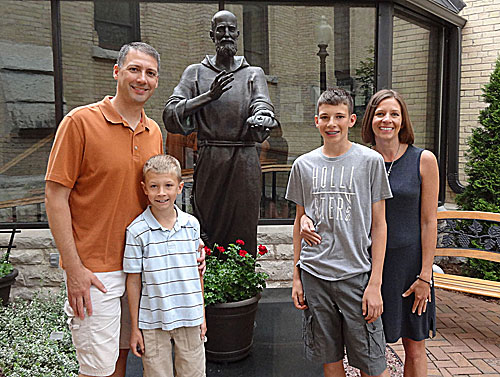 Brian and Lara Bleck are pictured with their sons Adam, left, and Kaden in front of a statue of Fr. Solanus Casey at St. Joseph Church in Appleton. The Blecks have a special devotion to the Capuchin friar. (Photo courtesy of Brian Bleck)

Fr. Solanus was born on Nov. 25, 1870, in Oak Grove. He entered the Capuchin Franciscan order in Detroit in 1897.  He celebrated his first Mass at St. Joseph Parish in Appleton and passed away 53 years later on July 31, 1957. His body was found incorrupt 30 years after his death, and he was declared venerable by Pope John Paul II on July 11, 1995.

A presentation on the life of Fr. Solanus was held at the Xavier Fine Arts Theatre on Oct. 16, sponsored by CIA-Faith Mission Operatives. The evening started out with an introduction to the priest’s life by Capuchin Fr. Jim Leary, pastor of St. Joseph Parish.

Fr. Solanus held various jobs as a young man, including a trolley car driver in Appleton and Stillwater, Minn. One day while working in Stillwater, he saw a man stab a woman to death on the trolley tracks. Witnessing the pain of God’s people, he made the decision to study for the priesthood.

“People immediately sensed a holiness in Fr. Solanus. He seemed to have the ability to read hearts and when people asked them to pray for their intentions they began to report cures, conversions and positive solutions to issues they faced,” said Fr. Jim.

There are a few key items to note about Fr. Solanus, said Brian Bleck, a member of St. Joseph Parish. “He devoted his life to the sick, poor and downtrodden. Fr. Solanus was a great servant of God, known for his simplicity, a heartfelt listening ear, and devout compassion for the sick and poor.”

Bleck has a personal devotion to Fr. Solanus.

“In 2003 my wife Lara and I were blessed by God to have brought our son Kaden into the world,” said Bleck. In 2006 they became pregnant with their second child.

Lara’s water broke at the 22-week mark and on Feb. 2, 2006, their daughter, Lauren, did not survive the birth. “We still had hope for another sibling for Kaden,” said Bleck. “In early 2007 we were again blessed to learn we’d have a new arrival in late December.”

At 22 weeks, Lara’s water broke again and the couple believed they were faced with the same conclusion to her pregnancy. Days in St. Elizabeth Hospital turned into weeks.

“As I traveled back and forth to the hospital, one of my frequent detours would involve a stop at St. Joe’s,” said Bleck. “I became a regular visitor and was often in deep prayer asking for intercession from Fr. Solanus Casey before his prayer garden statue. At these moments I felt a level of peace and calmness.”

On Nov. 3, Lara came home from the hospital and on Dec. 13 she delivered a healthy son, Adam.

“There is little medically to explain how a significant breaking of the amniotic sac could have been solved with absolute permanence for an additional 16-week period for Adam to completely develop,” said Bleck. “In the words of Fr. Solanus, ‘We leave the remaining explanation of our miracle in God’s hands.’”

Capuchin Fr. Dan Crosby traveled from Detroit to address the packed house at Xavier. He had the fortune of living in community with Fr. Solanus the year before the priest died. “I’m living proof that living with a saint doesn’t make you a saint,” he quipped.

He spoke of his time with Fr. Solanus. “He had a profound prayer life. He would never say miracles came from him. It was a surprise to him,” said Fr. Crosby. “He would say, ‘God is so good.’ Miracles didn’t make him holy, his faith did. He really believed God loved him and equally loved everybody else. He believed in God’s love with every ounce of his existence.”

Because he was a simplex priest, Fr. Solanus wasn’t allowed to deliver sermons or hear confessions, but Fr. Crosby recalled him being so approachable.

“He wasn’t there to impress people. The trouble with us is we don’t appreciate what he’s trying to tell us — God is real, you are loved and everybody else is too,” he said. “Don’t try to be holy in the sense of putting holy stuff on from the outside. Be real the way Solanus was. You’ve got the ingredients for holiness in you as well as he did.”