OCONTO FALLS — Rummage sales are kind of fascinating, when you think about it.

Each item in a rummage sale has a history, and that history expands every time the item is sold or exchanges hands. Take the doll and toy collection of Audrey Piper, for example. 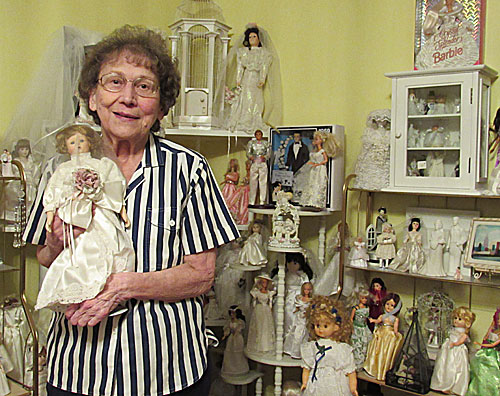 Your Catholic Neighbor: Audrey Piper (Tom Beschta | For The Compass)

For 50 years, Piper collected countless dolls and trinkets as an investment to help her family out of poverty. Today, many of her dolls are on their way to begin a new chapter as toys for children in underprivileged countries.

“I’ve heard stories about little girls in Haiti that have dolls with sticks for bodies,” Piper said. “Isn’t that sad? I’m glad my stuff is going there.”

Piper, 85, knows a thing or two about poverty. The youngest of 14 children (16 if you count the kids adopted by her parents), Piper never had much growing up. Even after she married her husband Earl Piper in 1951, they still struggled to get by on his warden’s salary.

By the mid-1960s, the Pipers had three children, Janet, Patrice and Jeff, but money was still hard to come by. It was around this time that Piper began buying cheap collectibles from local rummage sales with a profitable idea in mind.

“I’ve been collecting stuff from rummage sales for 50 years because we were so darn poor,” Piper said. “I thought I could always have an auction or something and have more money from selling the stuff.”

Though she has held a handful of rummage sales to “flip” some of her collectibles, Piper’s house is filled with items she has acquired over the years, including an assortment of dolls and toys that, according to Piper, likely numbers in the thousands.

“I would put them up on shelves and in boxes in the basement,” Piper said. “I think a lot of people thought I was nuts buying all this stuff. I left the prices on a lot of things so I can go back and look at what I paid for it and figure out what I can sell it for now.”

As Piper found her financial footing later in life, she began using her collection to help others, including donating dolls and toys to St. Vincent de Paul. Piper said her desire to help others was inspired by the faith of her mother, Josephine Kramer, who always reminded her of the importance of looking out for those who needed help.

“My mother was so religious and was such a good person,” Piper said. “She never complained and just worked, worked, worked. She would help anybody if they needed it. She didn’t have any money, but if she found a dollar she would give it away.”

“This little girl opened up the box, and there was a toothbrush in it,” Piper said. “She didn’t even know what a toothbrush was, but she was so excited just to get something that she ran to show her mother. I knew that’s where my stuff needed to go.”

Piper contacted the Diocese of Green Bay and set up an arrangement to have 350 dolls delivered to Haiti and the Dominican Republic. Piper carefully prepared each doll for the trip.

“I had all the dolls cleaned up,” Piper said. “I put together a couple of sets of clothes for each doll. Then I folded everything up together in tissue paper with a clothespin. I wanted each child to be able to open their doll like a Christmas present.”

In addition to the dolls, Piper sent clothing for boys, school supplies and personal hygiene products. With the help of Piper’s nephew, Kyle Piper, and donations made by her sister, Manny Kobes, the gifts were successfully delivered to the diocese on Oct. 2 and are currently on their way to underprivileged children.

Piper said she plans to send more items to these countries in the future if she is able, and hopes her story will encourage others to do the same to help spread some love and faith to children everywhere.

“Now that I found a place to send this stuff, maybe other people can send their things as well,” Piper said. “These little kids can have something, rather than everyone putting it out in a rummage sale.“

Though her donation was made for love and kindness, there is one small payment she hopes to receive for these dolls that have traveled so far.

“I would just love to see a picture of a little kid with one of those dolls,” Piper said.