October is traditionally the month of the rosary. And the Feast of Our Lady of the Rosary is Oct. 7. 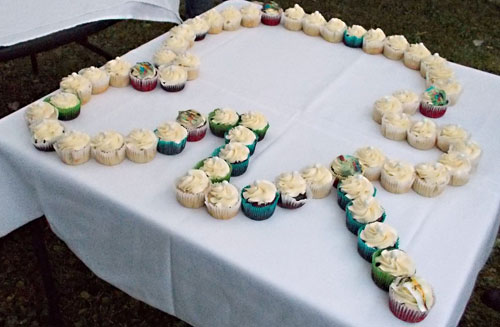 A cupcake rosary took center stage after a Living Rosary in Suamico, Wisc., on Oct. 7, 2017, the feast of Our Lady of the Rosary. (Patricia Kasten | The Compass)

Many of us have taken part in Living Rosaries, where each person takes the part of “a bead” in the chain, starting each prayer with everyone chiming in to finish.

This year, I was invited to attend a sunset living rosary in Suamico, north of Green Bay. The event has been hosted by a lady — who wishes to remain anonymous — for 15 years.

More than 100 people gathered in the yard, near a small house, as the sky darkened into twilight. No streetlights lit the country road.

Things started with someone singing Schubert’s “Ave Maria.” Then came a pause before the children in their first Communion attire walked from the garage, spreading rose petals for the statue of Mary carried by adults and escorted by a Knights of Columbus color guard. The statue was so large and its makeshift pedestal so tall that getting it in place was a bit of a struggle. And then the rest of the children brought flowers for the waiting vase, shining in the spotlight.

Candles were lit, wavering and going out in the wind, as the “beads” began to recite the Glorious mysteries. At the end, there was a “golden Hail Mary” for peace in the world.

Some voices sounded old while some were so young that they needed prompting. Some people spoke firmly and others broke into tears. Everyone else waited patiently to chime in firmly at the second half of each prayer. Overhead, Canadian geese winged south, adding their song.

And then the prayers ended and the feasting began — bright as day, even though the full moon was hidden by the clouds that had earlier poured showers.

Center stage went to the cupcake rosary (see right) with its medallion bead and crucifix airbrushed in place. There was also coffee, milk, cheese, sausage, cookies, bars, cheesecake and quiche. More than enough for everyone to stack their plates high.

This was Catholic devotional life at its best – everyday people gathered together from as far away as Chicago, praying and laughing and eating.

As the French writer Hillaire Belloc penned: “Wherever the Catholic sun doth shine, there’s always laughter and good red wine.” (And chocolate, too.) It’s been going on like this around the world for centuries.

“If I’ve still upright, I’ll do it again next year,” promised the hostess, who is an octogenarian.

Mary, a mother and hostess herself, must have approved, standing there in the hidden moonlight surrounded by the good, sweet cakes and her contented, well-fed children.