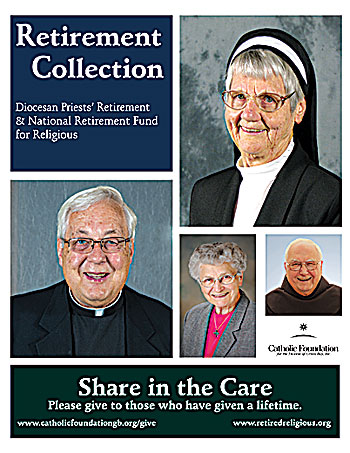 This is why, in 2017, the U.S. bishops extended the annual Retirement Fund for Religious collection for 10 years. The national collection was begun in 1988, when the significant lack of funds for the retirement needs of priests, brothers and sisters in religious orders came to light.

In the Diocese of Green Bay, the “Share in the Care” collection for retired religious and for the senior priests of the diocese will be held in parishes on the weekends of Dec. 9 and 10 and Dec. 16 and 17.

“During this time of the annual retirement collection, I would like to take this opportunity to thank the people of the Green Bay Diocese for their contributions in past years,” said Franciscan Sr. Louise Hembrecht, diocesan representative for religious.

Last year, $203,094 was donated by people in the Green Bay Diocese for retired religious national collection. Another $192,714 was collected for 106 senior priests of the diocese, according to Josh Diedrich, assistant director of the Catholic Foundation, which oversees the collection.

“I’ve been told that our diocese is one of the more generous around the country, in terms of supporting retired religious,” said Diedrich. “That’s the generosity of the people here.”

Sr. Louise, who is a member of the Franciscan Sisters of Christian Charity, agrees.

“The people of the Green Bay Diocese have been leaders in generosity to this collection,” she said. “The retired diocesan priests and religious sisters, brothers and priests are grateful and continue to serve the people of the diocese by their enthusiastic witness and prayer. Those whose health allows continue to volunteer their services.”

The National Religious Retirement Office reports that there are more than 32,000 religious men and women over the age of 70 in the United States. For more of their active lives, they served for little or no pay. Today, their religious communities are responsible for their care and support. The average annual care cost for each of them is $42,344. (For more information, see www.retiredreligious.org.)

Since the first appeal in 1988, $775 million have been distributed to congregations across the nation. Some of those congregations are in the Diocese of Green Bay. Other religious communities based in northeast Wisconsin area have themselves made contributions to the fund over the years.

The Diocese of Green Bay is also sponsoring TV announcements about the collection that will run during the two weeks of the retirement fund campaign. Most of the spots will air on the local stations during their news shows. However, this year, the diocese also bought time to run some of the TV spots on cable channels, according to Justine Lodl, communications director. She said that these will include Freeform (700 Club) and the Hallmark Network, during some of the Hallmark holiday movies.

Gifts for retired religious and senior diocesan priests can be made through parishes or to the Catholic Foundation online at www.catholicfoundationgb.org/give. The collection envelopes allow donors to indicate how much of their donation goes to the religious retirement fund and/or the diocesan priests’ retirement collection.

According to the Catholic Foundation, the average senior priest in the Green Bay Diocese receives $1,365 a month from the priests’ pension fund. While all diocesan priests now participate in the Social Security tax contributions (FICA), this was not always the case for many priests before the 1970s, due to a ministerial exemption from FICA. (Such an exemption is still allowed, in some circumstances, by the IRS.)

As Bishop David Ricken says in the TV ads, “Our retired sisters, brothers and priests have helped many, many people. Please help them today.”