ANTIGO — Dr. Ted Fox grew up wanting to tend cows. Instead, he has spent a lifetime caring for people.

At 5 foot, 6 inches, the longtime Antigo physician is diminutive in stature, but a giant in his community and medical circles across the state. From his days as the Bucky Badger mascot at the University of Wisconsin, to the establishment of Antigo’s General Clinic in 1964 and, more recently, his involvement in the Knights of Columbus, his has been a life of style, substance and service. 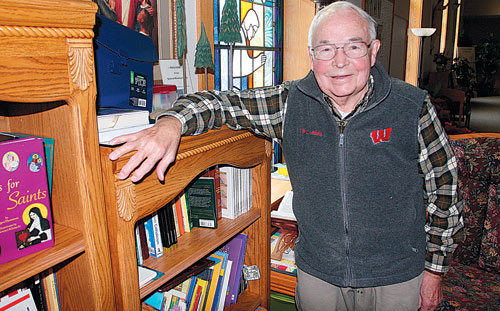 “I loved my job and everything I have done,” Dr. Fox said. “I’ve always felt as though I was really blessed.”

A native of Racine, Dr. Fox grew up as a member of St. Rose Parish, the youngest of six children. He attended public schools, played football and wrestled, a sport he continued in college despite an admonishment from his father that “you’re not going to the University of Wisconsin to wrestle and date girls.”

His initial interests were far from the rigors required to be a physician.

“I was always going to be a dairy farmer,” he said, an unusual choice for a youngster who did not come from an agricultural background. “I worked at the university’s dairy farm in Madison, but then I wondered if I would still be enjoying it when I was older, like 40.”

At the urging of a friend and medical student, Earl Roth, whose father was a general practitioner in Racine, Dr. Fox switched to the medical track, a decision he has never regretted.

“I love nature, the outdoors and animals, but I love people more,” he said. “I love interacting with others. That was the reason I switched.”

Active in the ROTC, Dr. Fox narrowly missed military service during the Korean War due to a college wrestling injury, which led to a temporary deferment.

“Who knows what would have happened if I had been called into service at that time,” he said.

Instead, he continued his medical training, joined the Navy and completed his internship at Oak Knoll Naval Hospital in Oakland, Calif.

Along the way, he met his future wife, Barbara, on a blind date arranged by a classmate.

“I had a girlfriend at the time, but he said, ‘Ted, if you take this girl out, you’ll marry her,’” Dr. Fox recalled. “That piqued my interest. We were married 10 months later. That was 61 years ago. She is my soul mate.”

After military service based largely in Taiwan, Dr. Fox completed his residency in Illinois, with a goal of practicing in a small town. He tried Minocqua and Germantown before settling on Antigo, where another college friend, Dr. John McKenna, the best man at his wedding, was establishing a practice and clinic.

Under his and Dr. McKenna’s guidance, the General Clinic established a reputation for quality patient care that has carried over into its new role as a department of the Aspirus health care system. It also began a mentoring program to train the next generation of physicians.

He retired from full-time practice in 2000 and hung up his stethoscope for good nine years later.

Throughout his medical career, and while he and Barbara were raising their five sons and three daughters, faith was always in the forefront of his decision making.

When they arrived in Antigo, the family joined St. John the Evangelist Parish, where Dr. Fox found a calling as a lector. He carried over that role during a pilgrimage to Rome in 2004 with Bishop Robert Banks. While there, he had the opportunity to do a reading at a side chapel at St. Peter’s Basilica.

“That was a wonderful trip,” he recalled.

Since retiring, Dr. Fox has taken a leadership role in the Antigo Knights of Columbus, which works to promote faith and patriotism.

He discovered the Knights while attending his grandson’s first Communion, which included a Fourth Degree honor guard.

“I was very impressed,” he said. “I thought, wow, I’m going to look into joining that group.”

He became a Fourth Degree Knight in 2002 and served as Grand Knight of the Antigo council for four years.

“It is a good organization,” he said. “We do a lot of charitable work, both locally and internationally.”

Today, as throughout his life, Dr. Fox lives his faith quietly. It was ingrained in him as a young boy, working in his family’s ice business, through college and medical school, and as he raised his family and developed his career. Lately, he said he has honed his admittedly-slim academic knowledge of the faith through EWTN, the Catholic television network, which he watches regularly.

Life, he said, has always come down to choices.

“First, I selected medicine over dairy farming, then I found my wife and we chose Antigo,” he said. “I have prayed a lot about those things. They have been good choices.”

Words to live by:  “Do unto others as you would have them do unto you. Treat people with respect and listen.