DE PERE — The Norbertine Community of St. Norbert Abbey has elected Fr. Dane Joseph Radecki as the seventh abbot in its 125-year history. Abbot Radecki was elected for a term of nine years and begins his term immediately. 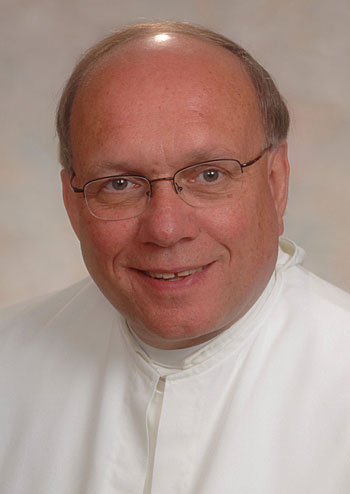 Norbertine Fr. Dane Radecki has been elected abbot of the Norbertine Community of St. Norbert Abbey.

Abbot Radecki, the son of Richard Radecki and Theresa (Villeneuve) Radecki, is a native of Pulaski, where his family continues to reside. He has one sister, Lori Hudson (Roger), and two brothers, Rodney Radecki (Cheryl) and the late Jeffrey Radecki.

The new abbot is a graduate of Prémontré High School (currently NDA) and SNC. His theological training took place at Catholic Theological Union, Chicago, from where he received a Master of Divinity degree. He received a Master of Science in Administration degree from the University of Notre Dame, South Bend, Ind., and a Doctor of Education degree from the University of San Francisco. He was ordained to the priesthood in 1977. 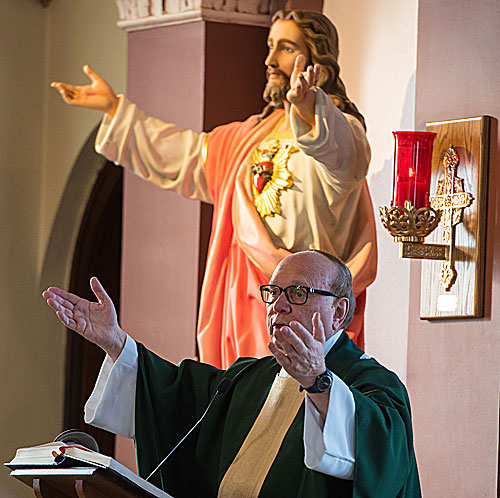 Norbertine Fr. Dane Radecki is pictured at Mass at Holy Cross Church, where he serves as pastor. Fr. Radecki was elected abbot by the Norbertines of St. Norbert Abbey on April 4. (Sam Lucero | The Compass)

In 2012, Abbot Radecki was named president of the Green Bay Area Catholic Education system (GRACE). In 2016, he was named temporary administrator of St. Mary of the Immaculate Conception Parish, Greenville, and most recently served as pastor of Holy Cross Parish Family before being elected abbot of the St. Norbert Abbey community.

Abbot Radecki has served on boards of trustees at SNC, NDA and Archmere Academy, Claymont, Del. He was a planning consultant in the Office of Catholic Education for the Archdiocese of Chicago; administrative intern for the office of the president at the University of St. Thomas, St. Paul, Minn.;  and president of the Wisconsin Association of Principals of Catholic Secondary Schools.

In preparation for the abbatial blessing, a coat of arms is being developed by the new abbot. At the formal blessing, most likely in June, Abbot Radecki receives his miter and crozier—symbols of authority and service.