Editor’s note: Tony Pichler was honored on April 12 as a 2018 Faith That Works award winner. To recognize those who integrate their Catholic faith in their workplaces, parishes and communities, The Compass annually invites readers and parish leadership to nominate candidates for the honors. 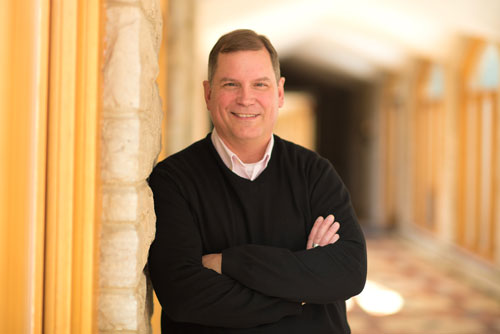 Tony Pichler, director of the Norbertine Center for Spirituality, co-founded Streetlights Outreach in 2004. Streetlights, which, started as a way to provide a presence on the streets, is now one of four programs that are a part of Whatsoever You Do, Inc. (Scott Eastman | For The Compass)

DE PERE — Ask Tony Pichler to describe the four programs within the nonprofit organization Whatsoever You Do, Inc. and he may reply with a single word: relationships.

Pichler, director at the Norbertine Center for Spirituality at St. Norbert Abbey, and Deacon Steve Meyer of St. Elizabeth Ann Seton Parish, Green Bay, co-founded Streetlights Outreach in 2004. They never intended for the grassroots effort to grow into an official nonprofit.

“We intentionally did not want to be real organized,” said Pichler. “We didn’t want structure. We just wanted to be a group of volunteers who have a presence on the streets. The only thing we had was a checkbook so we could buy food for our block parties.”

The first block party, offering free food, was held in 2005. Approximately 50 people attended. Today, the Streetlights Outreach block parties at Whitney Park in Green Bay attract 400 to 450 people and include music, children’s games and activities and bike repairs through Spokes of Hope in addition to food. The growth, including the additions of Amani Outreach to seniors and the Giving Garden, a community garden that rents out plots on University Avenue in Green Bay, called for more organization.

“We now have a structure for the long haul,” said Pichler. “We have a board, office space at the Hope Center in Green Bay, a website (https://what soeveryoudo.us), a Facebook page, email, phone, bank account. That’s not anything we envisioned, but that seems to be the evolution.”

Serving the marginalized and vulnerable is at the heart of Whatsoever You Do and much of Pichler’s ministry. He helped to start St. John the Evangelist Homeless Shelter in Green Bay with Deacon Meyer and Susan Perrault. They met with Sacred Heart Fr. Guy Blair about starting a shelter in the school building. When Fr. Blair left the diocese, a ministry team was formed to serve at the shelter. Pichler continues to serve on the team.
Pichler, a member St. Norbert College Parish (Old St. Joseph) in De Pere where he serves on the worship committee, was also part of the team, along with Deacon Tim Reilly and Mike Westenberg, which started the Micah Center in Green Bay.

“The Micah Center came out of a need for a daytime resource center (for people who are homeless),” said Pichler. “There had been a group that had worked on starting a center for four years, but kept running up against pitfalls. They had two different properties that they ran past the Green Bay City Council. Both were shot down.

“Ultimately, we found the property at 700 E. Walnut (Green Bay) and bought it under the use of a shell corporation, so no one knew who we were,” he added. “I’m really proud of the fact that in a roundabout way, Whatsoever You Do and Streetlights Outreach were involved in not only starting St. John’s but the Micah Center as well. It’s helped a lot of people over the years.”

An Eau Claire native, Pichler moved to Marshfield when he was a junior in high school where he became friends with Deacon Meyer. He graduated from St. John’s University in Collegeville, Minn. Following a year working in St. Cloud, Minn., Pichler made his way to Northeast Wisconsin. He served six years as a religious education coordinator and in youth ministry at St. Bernard Parish, Appleton. In 1993, he accepted a position in youth ministry and young adult ministry with the diocese. From 2003 to 2015, he served as diocesan director of lay ministry formation.

Pichler, who earned a master’s in theological studies from St. Norbert College, De Pere, credits a Young Neighbors in Action trip to Hartford, Conn., in the 1990s for spurring his involvement in serving people on the margins.

“That was the first time I really experienced dire poverty,” he said. “I really connected Matthew 25, ‘For I was hungry and you gave me something to eat,’ to the service we were doing that week. I came back and started to engage in simple service activities. I would go down to Salvation Army and help serve a meal. I would go to St. Vincent de Paul and help sort clothes and shoes. I did that for about 10 years.

“We have more in common with the people on the streets than we think,” he added. “The fear doesn’t need to be there.”

Pichler and his wife, Janine, have two adult children: Andy and Meagan. His other ministries and outreach include facilitating the Finding Our Way retreats at St. Norbert Abbey for people experiencing homelessness and coaching for Special Olympics. Pichler said that he has been blessed to serve on national boards and committees and to publish eight faith-based books and a binder series. He is an associate of the Sisters of St. Joseph of Carondelet, St. Louis Province, and a Norbertine associate to enhance his faith life.

“Dorothy Day is my absolute model,” he explained. “She had the balance right; active in justice and service, but also had an incredible spiritual life. Anybody who is going to be doing this for a period of time needs that balance.”

Pichler’s goal is to someday open a house of hospitality in the Green Bay area in honor of Dorothy Day.

“I think it would continue to fill a need in building those relationships that we have going in all these other programs,” he said. “We need a place where you can just sit around a table, just a home where people can come. I don’t have a timetable, but I’m pretty confident that before I’m done it will happen.”