Bolle, 30, a member of Holy Cross Parish in Kaukauna, was among more than 2,100 people participating in this year’s Walk to Mary May 5. In fact, Bolle has participated in every walk since the pilgrimage began in 2013. 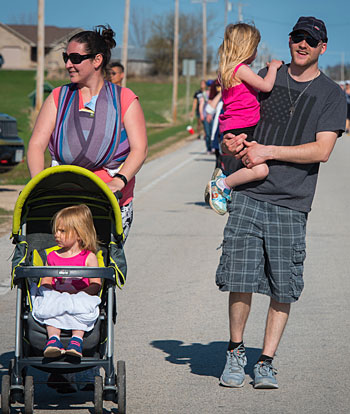 Joseph Bolle walks with his wife, Megan, and three children, Charlotte, Amelia and Jude (held by Megan in a carrying pack) at the end of the Walk for Mary May 5. Joseph began his walk at SS. Peter and Paul Church in Green Bay, while his family began at the “Walk with the Children” location, two miles from the National Shrine of Our Lady of Good Help. (Sam Lucero | The Compass)

Walk to Mary was conceived by two local Catholics, Pat Deprey and Tom Schmit, in response to a challenge issued by Relevant Radio’s Fr. Rocky Hoffman at a Catholic men’s conference in 2012. Bolle attended that 2012 Esto Vir men’s conference and thought it would be neat to be part of that first walk, which attracted approximately 500 people.

“That’s what started me doing it,” he told The Compass in an interview outside of SS. Peter and Paul Church in Green Bay, where he began this year’s walk with friends. “From there, it just sort of evolved and developed as something that’s become important and something that I’ve been passionate about.”

Bolle said he completed the 2013 Walk to Mary alone. “I invited a bunch of people and they weren’t able to make it,” he said. “I ended up doing 14 miles myself, which is kind of a long walk alone.”

But that time in solitude gave him a chance to think, pray and reflect, he said.

“I think it was almost a blessing in disguise, mostly because I was able to find a deeper reason for doing it and why it’s important to me,” said Bolle.

He also had a chance to reflect on the role Mary plays in salvation. “Mary’s really the means that brought Christ and God into this world and, because of that, what she does is lead us to Christ,” said Bolle. “Doing that walk, I ended up praying every single mystery of the rosary and reflecting. I had a single strap backpack and … those last five or six miles I felt it digging into my shoulder. It caused me to realize, ‘You know, Jesus carried a cross on his shoulder and I’m complaining about a four-pound backpack.’ It became a sacrifice and offering.” 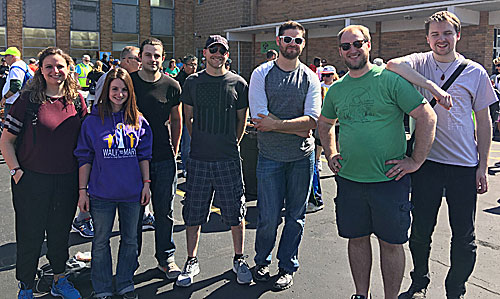 Walk to Mary participant Joseph Bolle is pictured at SS. Peter and Paul Church in Green Bay, where he and friends began the May 5 pilgrimage. From left: Christy Morehead, Angela Wells, Matt Wells, Bolle, Ben Gunville, Josh Preissner and John Bolle. (Submitted Photo | For The Compass)

Bolle said he was able to build his relationship with Christ through Mary on that first walk and it was something he wanted to share with others. “It keeps me grounded and it’s always something I wanted to bring as many people to as I can,” he said.

In 2014, Bolle was joined by his wife, Megan, sister, Suzanne, and friend, Alex Pakala. “The next year, there were about six to eight of us,” he said. “The year after that, we had about a dozen. So we’ve been kind of sticking to between six to 12 of us.” In addition, his friends have invited other friends to walk.

Last year’s walk led to other graces, as Bolle met a man who had just been diagnosed with cancer.

“He was going through testing and it didn’t sound good,” said Bolle. “I think at that time, none of us expected to see him in a year and we all prayed for him on that walk. And he’s still here, responding incredibly well to chemo, better than any of the doctors thought.”

Bolle said he received a text from the man the day before the walk and he asked Bolle to keep him in prayer. “There are a lot of neat things I’ve seen doing this walk, different prayer intentions that have been answered,” he said. “Not necessarily miracles, but even in small things, God has a hand in those.”

It is one reason why Bolle asks Facebook friends to share their prayer intentions with him before the walk. “I’ve gotten a couple of text messages and a couple of Facebook posts; people asking for prayers as well, so it’s been pretty powerful,” he said.

In addition to the six friends who walked with him from SS. Peter and Paul, Bolle was joined by his wife, and three children — Charlotte, 4, Amelia, 2, and Jude, 7 weeks — for the final two miles. “Usually they start with us at (SS. Peter and Paul) and we bring a stroller,” he said. “This will be our first year with three (children). My 4-year-old’s been asking us every day for the last week, ‘Is Walk to Mary today?’”

Bolle said he plans to participate in the Walk to Mary “until I can’t.” He said he will continue to invite others to join him on what he calls “that metaphorical journey to holiness.”

“Being able to make that journey — for 14 miles or 7 miles or 2 miles or 22 miles  — gives you that opportunity to reflect in prayer and grow closer to God,” he said. It’s also an opportunity to visit the National Shrine of Our Lady of Good Help, where the Blessed Mother appeared to Adele Brise in 1859 and where visitors have reported physical and spiritual healings.

“The miracles, the apparitions, are given to us as a gift and being so close to it, I think it’s silly not to take advantage of the opportunity to be part of something like that and to use it as an opportunity to grow closer to Christ,” said Bolle.

It’s a grace that Bolle said he’s blessed to experience, one footstep at a time.

Walk to Mary photos: To view photos from the Walk to Mary, visit our Flickr page.