DE PERE — Norbertine Abbot Dane Radecki honored those who have walked before him at the abbatial blessing on July 2 at St. Norbert Abbey. He used, wore or carried items from each of the six previous abbots: the mitre and ring of Abbot Bernard Pennings, the pectoral cross and crosier of Abbot Sylvester Killeen, the wanga stone of Abbot Jerome Tremel, the ring of Abbot Benjamin Mackin, the medallion of Abbot E. Thomas DeWane and socks featuring bees (see box on page 7), a gift from Abbot Gary Neville.

“I want to respect and recognize

each of my predecessors,” said Abbot Radecki, a Pulaski native. Bishop David Ricken was the celebrant and blessed Abbot Radecki. Among those in attendance were Abbot General Thomas Handgrätinger, who governs the order worldwide, and prelates from around the world. Following the liturgy, a reception was held on the front lawn of St. Norbert Abbey followed by dinner at St. Norbert College in De Pere.

The election of Abbot Radecki as the seventh abbot in the community’s 125-year history may not have happened if not for three retreat days — held one a month — prior to his election to a nine-year term on April 4.

“I felt good about our community discernment,” said Abbot Radecki in an interview with The Compass. “Those days were really pivotal to me personally in terms of being able to say ‘yes’ because you can say ‘no.’ What I sensed from the guys was a yearning and openness to address some things about our own life and lifestyle with hope and, I’m using their words, ‘a new beginning.’”

Abbot Radecki, who was ordained to the priesthood in 1977, added that skills developed in his previous assignments will help him facilitate change.

“That’s what I was sensing with the guys here,” he said. “I felt a connection to what they were looking for, what we were hoping for and some of my background.”

While Abbot Radecki sensed that he was the right fit for the community at this moment, he still had some mixed feelings.

“I had pretty much psychologically anchored myself at Holy Cross as a place to finish my years of service,” he said. “The election came before one year was up. I felt my ‘retirement plan’ was no longer.”

The Norbertines have served at Holy Cross for more than 100 years. Abbot Radecki needed to find his successor: Abbot Gary Neville was appointed the new pastor.

“When I was elected, I met with every man of this abbey during the first month,” explained Abbot Radecki. “I listened. I wanted to understand, from our meetings before the election, where did they think we needed to go?

“I wasn’t prepared with any expectation, but was pleasantly surprised by the amount of what I call ‘self-donation.’ That’s a phrase we use to say: ‘I‘m willing to give up whatever to help this abbey,’” he said.

“I had two men who volunteered for Holy Cross,” he added. “It’s a wonderful community and has been so intertwined with the order. I didn’t want to see that end. I asked Abbot Gary. That’s just one of several examples of self-donation.”

Three elements have been identified as part of the ‘new beginning.’ First, the order is in the process of finalizing a new mission statement. A repositioning of personnel to reach the target of growth is also underway. The third part is “allocating our resources driven by our new mission statement so that we have great clarity and focus,” said Abbot Radecki.

Among the personnel changes is the recent announcement of Fr. Bradley Vanden Branden as the new prior of St. Norbert Abbey. He is also the head of the liturgy committee and will serve as rector. Fr. Mike Brennan has been asked to serve as full-time vocations coordinator for the order. Fr. Jim Baraniak, the former prior, will serve at the Holy Spirit House of Study in Chicago. Abbot Radecki said that Fr. Patrick La Pacz will extend his stay at the house for a couple more years and that Fr. Binu Varghese has volunteered to serve in Chicago.

Communications were discussed in meetings. Abbot Radecki writes “Abbot’s Notes” to the men each week to inform them of new appointments and congratulations.

“How do we keep affirming the guys? They are going to get tired of the fact that we are always going to have festive dinners to say ‘thanks.’ That’s affirmation,” he said. “A community needs to do that. We can do better in that area.”

“It’s mutual work on making sure that the college’s mission as a Catholic college, as a Norbertine college, as a liberal arts college keeps improving,” he said. “It’s mostly about the values. I’m more in a governance role.”

“I’ve asked Fr. David McElroy to be the interim director and develop a process for the advisory board and the community to talk about the purpose, whether we repurpose the (Norbertine Volunteer Community) house or continue as it is,” he said.

Abbot Radecki will be traveling to Rolduc Abbey in the southern Netherlands this month for the order’s next general chapter. The last general chapter, six years ago, was held in De Pere. A new abbot general will be elected and a revised book of constitutions will be discussed this year.

Locally, the Norbertines will continue to serve the Diocese of Green Bay. The order owns two churches, Old St. Joseph Church in De Pere (St.  Norbert College Parish) and St. Willebrord in Green Bay. They serve at three others — Resurrection in Allouez, Our Lady of Lourdes in De Pere and Holy Cross. Abbot Radecki will assist with confirmations in the diocese in the next year.

“Our foundations all across this country, from California to Albuquerque to Delaware to Philadelphia to here, are all working together on some common celebration as well as our own individual abbeys,” said Abbot Radecki. “It will be very joyful to be in this role at that time.

“When you are connected to our international conifères and some of the abbeys, which are quite ancient, you get that sense of this long history,” he added. “I’ve walked through some of them. I’ve thought to myself ‘Which saint was here?’ ‘How much of our history was shaped by this abbey?’”

Abbot Radecki would like to see even more visitors at St. Norbert Abbey and said that the topic will likely be discussed after this first year.

“Why would you have people come to this abbey? If we say for prayer and liturgy, we have to do it so it’s known, not just on a sign,” he said. “The Norbertine Center for Spirituality has probably been the greatest touchstone for visits. There are more reasons. The Abbey Church is a splendid place for choral work. Obviously, we have an organ series. I think the arts are another possibility. What about sacramental reconciliation? Norbert was a healer.”

In the meantime, there is always an immediate to-do list, said Abbot Radecki.

“If a place is growing, it’s alive with stuff to do,” he said. “It’s not all pretty, but it moves us forward.”

The Abbots of St. Norbert Abbey 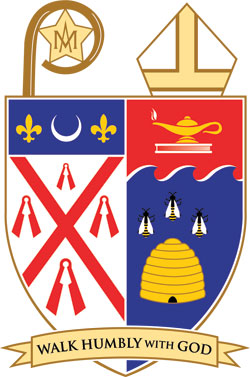 The principal symbol in the St. Norbert Abbey coat of arms is a red diagonal cross on a silver field. A pair of red medieval shears is centered in each angle. These shears are symbolic of the Counts of Gennep, the house to which St. Norbert of Xanten belonged (1080-1134).

Above the shield is a crozier, indicating the abbatial status of St. Norbert Abbey. The superimposed letters “A” and “M” on a star denote the angelic salutation Ave Maria, and the Marian invocation Star of the Sea.”

The principal symbol in the Abbot Radecki coat of arms is the gold beehive and bees on a field of blue, which are taken from the medieval Radecki coat of arms. Bees are noted for their industry and creativity. They work unceasingly, not just for themselves, but for the common good of the hive, producing the “gold” of honey and wax, worthy to be burned as candles on the altar at the Mass. The three bees in number denote the Trinity and the religious vows of poverty, chastity and obedience.

White-capped blue waves divide the lower right field into two parts and are derived from Abbot Radecki’s French-Canadian maternal heritage (Villeneuve), the waters of Green Bay, and his love of water from his youthful years with his relatives in Upper Michigan.

Above this shield is a mitre, a tall two-sided headdress worn by abbots (and bishops) as a symbol of their office, denoting both the Old and New Testaments.

Happy Mother’s Day! Whether you are a mom, grandma, godmother or stepmother, I hope that Mother’s Day is a time of grace and blessing ...
Continue