NIAGARA — If your eyes are on the road, you might miss what is called, simply, “The Grotto.”

It’s nestled into a wooded hillside next to St. Anthony Church right along Highway 141 (River Street), with a parking lot in front of it, and a flight of steps leading up to it. At the highest point sits a statue of the Blessed Mother, with smaller statues in tiny alcoves along the stone stairway on the left side, and a large statue of the Sacred Heart in another alcove on the right. 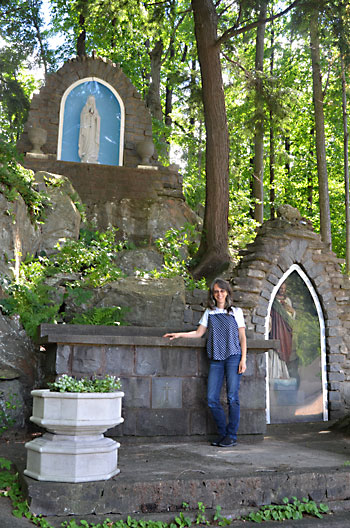 Dawn Johnson, officer manager at St. Anthony Parish in Niagara, stands in front of the stone altar in the grotto adjacent to the church. (Monica Sawyn | For The Compass)

To one side of the grotto is a bench.

“Our maintenance man, Randy Pilon, said he often stumbles on people just sitting there on the bench, reflecting quietly,” said Dawn Johnson, office manager and director of religious education for the parish.

At ground level is a stone altar, where Masses are still celebrated occasionally and a tombstone dedicated to aborted children. George and Rose Bousley, who live in what was the first rectory back in the early 1900s, spearheaded the efforts to add that stone about 15 years ago.

“We’re very against abortion, that’s one reason why we did it,” Rose Bousley said. “But also, I wasn’t supposed to be able to have children, but after prayers to St. Jude, I had five.” She and her husband chose to honor those children who had no chance to be born.

The grotto isn’t just a tourist attraction — although visitors are welcome. It’s an integral part of the parish, used for various events through the year. Friday holy hours, usually held in the church from 1 to 2 p.m., are sometimes moved to the grotto. The Blessed Sacrament is placed on the stone altar, “where it looks like Jesus is looking out and blessing the whole community,” Johnson said.

In the past, May crownings were held in the grotto, and the stone steps on either side would be lined with first communicants. Now, because the number of parishioners has dwindled, there are fewer children for such events.

Masses are held in the grotto occasionally, but the last time, last year, it was a Mass of reparation. Vandals had spray-painted some of the stone and the plexiglass fronting the big statues.

“That very day a group arrived to clean up,” Johnson said. “The vandalism occurred on Saturday, and Wednesday we had a special Mass to rebless the whole grotto.”

Fr. Matt Settle, who was transferred in July to Tigerton, Wittenberg and Marion, processed the periphery of the grounds saying blessing prayers, and later a rosary of reparation was prayed.

“It really brought the community together,” Johnson said. “There was a wonderful sense that the Holy Spirit was present.”

A stone plaque says the shrine was originally dedicated to the Blessed Mother by the Len Turppa family, with the dates 1948-1949, but no one seems to remember why it was built, or anything about the family. The original couple died long ago, and their descendants no longer live in the area.

However, a possible answer is suggested when looking into the history of the parish. St. Anthony’s first church was a white, wooden structure dedicated in 1902, located farther up Hwy 141 where it is also called Main Street. In 1927, the church was either moved to or rebuilt at the current site, and replaced in 1964 with the present building.

A series of old photos and postcards, compiled by William John Cummings and put online by the Dickinson County Library, includes pictures of the first church. Those pictures also include a stone grotto dedicated to Mary, a grotto which most people today never knew about or had forgotten. That grotto was apparently left behind during the relocation of the church in 1927.

The supposition is that the Turppa family, back in the 1940s, missed that old grotto, and spurred by their own devotion to the Blessed Virgin, had the present grotto built. It isn’t known whether materials from the first grotto were used, or whether the Mary statue is the same one.

No matter how it got there, the grotto can be a quiet stopping place for travelers, a place of prayer for parishioners and visitors, and a testament to faith-made-visible.