ALLOUEZ — The Compass will sponsor a 12-day pilgrimage to Spain and Portugal next May. The trip’s highlight will be walking the Camino de Santiago (Road of St. James), from Molinaseca, Spain, to Santiago de Compostela, Spain, home of St. James Cathedral. 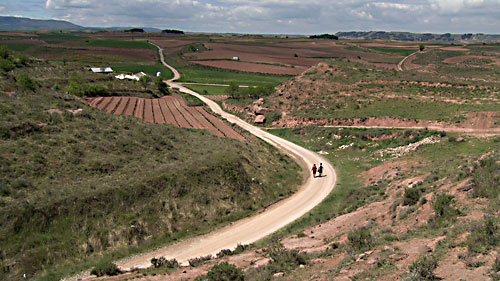 Fr. Luke Ferris, diocesan vicar for clergy and pastoral leaders, will lead the 2019 pilgrimage. Pilgrims will depart from Green Bay by bus to Chicago on Monday, May 20, and return on Friday, May 31.

Also known as the Way of St. James, the walking pilgrimage follows the path where, legend holds, the body of St. James (who was beheaded in Jerusalem in 44 A.D.) was taken to its final resting place in a crypt at the Santiago de Compostela cathedral.

Once a highly traveled route during the Middle Ages, its popularity waned for centuries until it gained popularity after the Council of Europe declared it the first European Cultural Route in 1987. The Camino pilgrimage was the focus of a 2010 movie, “The Way,” starring Martin Sheen and Emilio Estevez.

Hundreds of thousands of Christian pilgrims from around the world walk the Camino each year, beginning their journeys from four routes. The Compass pilgrims will spend six days walking from Molinaseca to Santiago de Compostela, a distance of about 233 kilometers (145 miles).

May 21: Arrive in Madrid and travel by coach to the Cathedral of the Almundena for a Mass of Thanksgiving for a safe arrival. Following a ride through the Castilian countryside, the group arrives at San Lorenzo for dinner and a two-night stay.

May 22: The group travels to the Guadarrama mountain range to visit Valle de los Caidos (Valley of the Fallen), where a large cross marks the place of rest for fallen soldiers of the Spanish Civil War. A trip to Segovia follows, where the group will see the ancient Roman Aqueduct and then visit Spain’s last Gothic Cathedral, “Catedral de San Frutos.” A visit to the Alcazar de Segovia castle and a rosary procession follows, before the group celebrates Mass at a Carmelite church. The group returns to San Lorenzo for dinner.

May 23: The group departs San Lorenzo for Molinaseca. Following lunch, pilgrims will begin their walking journey to Ponferrada, a six-mile walk, where they will celebrate Mass at the Basilica de la Encina and check into their hotel for dinner.

May 24: The Camino walk continues from Ponferrada to Potomarin, a distance of 12 miles, before boarding a coach to Lugo for Mass, dinner and hotel stay.

May 25: Morning Mass begins the day, then the Camino walk continues through the village of Gonzar and other hamlets until arriving at Palas de Rei, a distance of 13.4 miles.

May 26: After Sunday morning Mass, the group will walk 12 miles from Palas del Rei to Arzua. The group boards their coach to Santiago de Compostela for the first of a three-night stay in the city.

May 27: Returning to Arzua, the group will walk 11.8 miles to O Pedrouzo. Mass will be celebrated at a chapel in Santiago, returning to the hotel for dinner.

May 28: Following breakfast, the group begins its final walk, 15 miles, passing by the Mount of Joy, where they get their first glimpse of the cathedral in Santiago de Compostela, returning to Santiago for Mass and dinner.

May 29: Pilgrims complete their Camino following breakfast, arriving at the Cathedral Basilica of St. James for Mass. A tradition for pilgrims is witnessing a large censer, called the “Botafumeiro,” swing back and forth. The schedule may not allow pilgrims to witness this practice. The group then visits the city’s administration building to have their “Camino Passport” stamped, verifying they completed the spiritual journey. The group then boards their coach and travels to Fatima, Portugal, to visit the Shrine of Our Lady of Fatima.

May 30: The group travels to Aljustrel and Valinhos, participating in the “Hungarian Way of the Cross,” a tribute to the Blessed Mother for Hungary’s liberation from communism.

Visits are also planned to the homes of the children to whom the Blessed Mother appeared in Fatima. Pilgrims then return to their hotel for lunch, evening Mass and a farewell dinner. An optional rosary procession will also be held.

May 31: The group departs from Lisbon, Portugal, and arrives in Chicago.

Cost for this pilgrimage is $3,944 per person if paid before Dec. 31, 2018. This includes hotels, double occupancy, and most breakfasts and dinners. An optional roundtrip coach bus is available from Green Bay to Chicago’s O’Hare International Airport for an additional $75.