Marosek attends Packers-Bears game thanks to help from hospice, diocese

ALLOUEZ — It was a depressing day for David Marosek last April. He had been battling stage 4 rectal cancer since July 2016 and the treatment seemed to be working. “As of August of last year I thought I was in the clear,” he said.

But then something changed. It was during a visit to his oncologist five months ago that Marosek learned the cancer had returned, spreading into his lungs and spine. 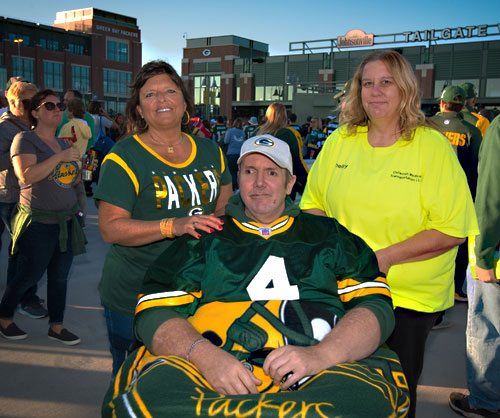 David Marosek of Oshkosh is pictured with Jayne Syrjamaki, left, and Shelly Sedo outside of Lambeau Field in Green Bay Sept. 9. Marosek, who has terminal cancer, was granted a wish to attend a Packers game. Syrjamaki, Aurora at Home Hospice volunteer coordinator, contacted the Diocese of Green Bay and was able to make Marosek’s wish come true. (Sam Lucero | The Compass)

“I was told that it was terminal and they gave me like six months to a year” to live, he told The Compass in a telephone interview from his Oshkosh apartment. Marosek traveled to Milwaukee for a second opinion, which concluded the same findings. Rather than begin new treatments he chose to enter hospice.

“I’ve been in hospice now for a few months,” he said. With the assistance of Aurora at Home Hospice, Marosek receives medical care and home visits from hospice staff, including Jayne Syrjamaki, Aurora at Home volunteer coordinator.

When hospice staff met Marosek in July, they posed a question to him: “If you had one wish, what would it be?” It’s part of the hospice program’s “Drop in the Bucket” initiative to grant small wishes to patients. The wish was then turned over to Syrjamaki. “He said he had always wanted to go to a Packer game,” she said.

“I’ve been a Packer fan all my life,” Marosek, 52, told The Compass. “I can remember, back when I was 5 or 6, watching Packer games on TV with my father — or listening to the game on the car radio after church on Sunday, waiting  for Mom to get groceries.”

The chance to watch a Green Bay Packers game live at Lambeau Field would be a dream come true, Marosek told Syrjamaki. So she set out to make it happen.

“I put out a message to a lot of businesses in the Oshkosh area that I was in need of tickets for a hospice patient to make his last wish come true,” she said.

Syrjamaki waited for weeks, but got no replies. However, she was determined to fulfill Marosek’s last wish because she could relate to his situation.

“I wasn’t about to give up because, I had the exact same diagnosis,” she said. “I went through colon cancer treatment four years ago. I’m a survivor, but I knew David wasn’t going to have the tomorrows that I have. That’s why it was a little more important to me.”

Syrjamaki decided to contact the Diocese of Green Bay.

“I grew up at St. Joseph Parish in Kellnersville and I remember reading things in the bulletin about how the diocese helped people,” she said. Her email request was given to Ted Phernetton, executive director of Catholic Charities in Green Bay. “Within a day, I heard back from Ted and that he was going to put out a request. About two days later he had tickets.”

In her email to the diocese, Syrjamaki explained that she wanted to grant the final wish of a hospice patient. “I am hoping you can help this gentleman or lead me in the right direction,” she wrote.

According to Phernetton, the request — as it was for Syrjamaki — struck a personal chord.

“For some reason this touched my heart immediately,” he told The Compass. “Maybe, in part, because I was lucky. I am a cancer survivor and he will not be.”

Phernetton explained that Catholic Charities receives many requests each day. “We work hard to bring the Gospel to life and to help where we can,” he said. “Life can get so very messy and folks typically turn to us when things are very dark in their lives.”

With terminal cancer, Marosek “has no real control over what comes next,” said Phernetton. “His wish is a way for him to pursue just a little bit of power and influence over what remains of his life.”

Phernetton’s first step was to email members of the diocesan staff, explaining the request and seeking help with tickets. “Within minutes, I began receiving responses from folks wanting to help or pointing me in specific directions,” he said.

Employees of the diocese contributed donations and procured two tickets for the Sept. 9 game between the Packers and the Chicago Bears. Their financial donations (along with a few cash donations from Syrjamaki’s friends) also provided funds for a Packers Pro Shop gift card and for concessions.

In a surprise visit Aug. 30, Syrjamaki informed Marosek that he would be attending the game. 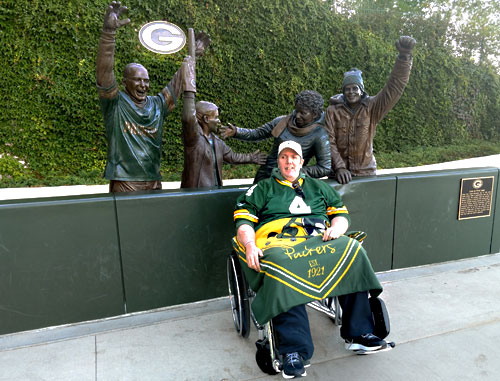 Dave Marosek sits in front of the “Lambeau Leap” monument outside of the Packers Pro Shop. Marosek attended the Sept. 9 Green Bay Packer game. (Shelly Sedo | Special To The Compass)

“I said I was there to do a volunteer supervisory visit,” she said. “We started talking about all the Packers posters on his walls and then he said, ‘l love the Packers.’ So I pulled out a fleece Packer blanket and said to David, ‘I would like you take this blanket and use it to cover up your legs when go to the Packers-Bears game.’ He cried, I cried. All tears of joy.”

“Healthwise, I know I’m dying. I understand that,” said Marosek. “I have some problems getting around. That’s why I got a wheelchair to go to the game. Otherwise, I’m in pretty good spirits, I guess, considering all of this.”

Marosek, an Appleton native who received the sacraments of baptism, first Communion and confirmation at St. Pius X Church, said he was given the sacrament of anointing from a visiting priest last week.

His spirits were raised as he entered Lambeau Field Sept. 9 to witness the Packers defeat the Bears, 24-23. After posing for a photo before the game, Marosek said that another set of tickets was donated to him by the diocese for the Oct. 15 Packers-San Francisco 49ers game, but he declined.

“I told them my dream was just to go to one Packer game,” he said. “I wasn’t going to be greedy. I am hoping somebody else (in hospice) will enjoy them and get to have the same experience I am having tonight.”

Phernetton said he was happy that the diocese could help Marosek fufill his dream.

“Bringing the Gospel to life means that as disciples we bring the love of Jesus into the streets of our communities and accompany folks on their journey as best we can,” he said. “I thought, ‘We can do this for this guy. We can make his wish come true.’”