APPLETON — Bullying has been around since biblical times, as the story of Cain and Abel can attest. But with the dawn of the internet and social media, bullying has intensified. It now can be done surreptitiously rather than face to face.

Franki Moscato, 16, a member of St. Raphael the Archangel Parish in Oshkosh, knows this firsthand. She was the target of bullies as the result of her burgeoning singing career. “I’ve been singing since I can remember. I never really sang in public much until I was about 11,” she said. “It really started with me singing with our local veterans. Traveling around with them to different cities, they’d have little memorials or I’d go to the elementary school and the high school and I’d perform with the veterans behind me as they did the color guard.” 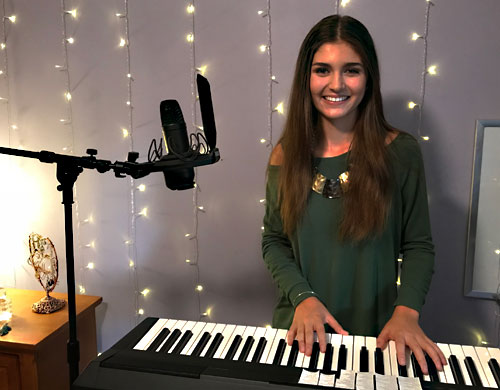 At age 16, Franki Moscato, a member of St. Raphael the Archangel Parish in Oshkosh, is already an accomplished singer and songwriter. Her singing talents led to bullying at school, which she has turned into a cause to help others who suffer from bullying. (Amanda Lauer | For The Compass)

She started singing the national anthem at events. She even sang at the Green Bay Packers’ Family Fun Night when she was 11.

At that time, Moscato was attending a local public school. Classmates started to bully her when her career took off. “Franki wouldn’t even talk about the productions she was in because she knew it was going to cause major bullying,” said her mother, Kathy Sakschek. “She tried to be secret about everything but she couldn’t.”

In seventh grade, Moscato left the public school system and enrolled in a Catholic school. Once again, she was the target of bullying.

“I had a lot of friends, I had great grades, I loved school but when I started getting more well-known around the community for singing, then all my friends publicly hated me. It was the popular thing to be the Franki hater,” said Moscato. “This wasn’t garden variety drama that would happen with these girls. One girl could turn the whole school against me and it was not just kids — it was teachers, it was parents.”

After ninth grade, she left that school system and now does online schooling through the Wisconsin Connections Academy.

“My outlet has been writing songs and talking about it and then also making music videos about it,” she said. “We made my first music video called ‘Me, Myself and I’ in 2017. It won Best Music Video in the London Independent Film Awards and the LA Film Awards. It gave me more opportunities and it gave me a lot more confidence from the feedback that I got from fans and really great supporters.”

Following the success of “Me, Myself and I,” she wrote another song about rising. “‘I Will Rise’ is about being kind,” she said. “Being kind is so simple, there’s not enough of it in this world.”

The weekend of Sept. 8-9, Moscato shot a video for her new song, with 350 people volunteering to be in the video. “The cool thing was you could just feel the energy of everybody. It was full of inspiration from everybody,” said Moscato. “The video starts out showing some lost souls. This girl comes out and helps a homeless guy. Other kids see it and it pans out to this girl, me, trying to give out free shirts that say ‘Be Kind.’ People ignore me, but finally one guy gets it and puts the shirt on and other people do the same thing. Pretty soon you’ve got 350 people right behind me.”

The hope is that the video will make an impact on the world, she said. “We don’t really know how God’s dots connect but I know that through this music video we will save lives. That’s really my goal is to save lives and inspire all ages that see it,” said Moscato.

Moscato’s mother said she believes the video impacted the life of a woman in the video. “This lady had been suicidal. … She was at the edge and somebody posted on her Facebook timeline about Franki’s music video. She said, ‘I have to do this.’”

Since recording the video, the woman said she no longer has thoughts of suicide, said Sakschek. “To teach people that mental health issues are real, we have to figure out how to get through it,” she said.

Great things are on the horizon for Moscato, including auditioning for the singing competition show American Idol, which begins its next season in early 2019.

When asked where she hopes to be in five years, Moscato offered, “I definitely would like to see me putting God first before all things, of course. And I’d like to see me still seeing the Midwest as my true home, wherever I may be. Whatever happens, whether I become a doctor or a singer, I hope that everything that I saw through God’s name inspires people.”