GREEN BAY — A severe snowstorm Jan. 28, followed by bitter cold temperatures Jan. 29 and 30, have most of Wisconsin in a winter icebox. Schools, businesses and churches around Wisconsin closed due to safety concerns from minus-zero temperatures. 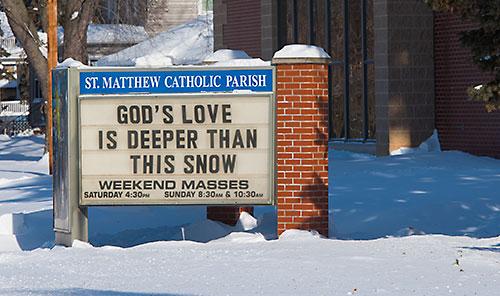 A marquee outside of St. Matthew Church in Allouez offers a warm message to passersby. (Sam Lucero | The Compass)

But what the polar vortex wasn’t able to do was freeze the curiosity and humor from a few priests from the Diocese of Green Bay.

It began around 8:30 a.m. Wednesday, Jan. 30, when Fr. Mark Mleziva, vocation director for the Diocese of Green Bay, posted a Facebook video. In it, Fr. Mleziva, wearing a Roncalli Jets (the Manitowoc Catholic high school team name) knit cap and a winter coat over his black clerical shirt and Roman collar, gives a description of the morning weather.

“It’s currently negative 22 and it feels like a negative 46 with the windchill,” he says in his best impression of Deacon Tom Mahoney, the retired WFRV-TV chief meteorologist who ministers at St. Francis Xavier Cathedral and St. John the Evangelist Parish in Green Bay.

Standing inside the Chancery building in Allouez and holding a ceramic coffee mug with hot water, he says he’s curious to see what happens when the water is tossed into the air on a record-breaking cold day. “We’re going to give this a shot because nobody’s at the office,” he says, looking over his shoulder just to make sure.

With smartphone camera recording, he steps outside the building and tosses the cup’s liquid contents into the air. “Wow!” he says as the water freezes in midair.

“I just remember seeing this done before, but I’ve never done it personally. So, I was curious and decided to give it a shot,” Fr. Mleziva said told The Compass in an email later in the day. He said his first attempt, with hot water from the sink, was a failure. “So I got some water from the coffee maker down stairs.”

The Facebook post received nearly 100 “likes” and more than 800 views — and it turned into a challenge for another diocesan priest, Fr. Richard Getchel, pastor of St. Mary Parish in Ledgeview, who posted his own video on Facebook a few hours later, with the help of Fr. Michael Thiel.

In his video, recorded outside of St. Mary Church, Fr. Getchel, sans gloves or hat, holds a garden hose spraying hot water. “Better than Mark Mleziva and his silly little cup of hot water,” yells Fr. Getchel over the sound of a howling wind.

It was the second time in five years that Fr. Getchel has attempted the feat. “No science (experiment) for me,” he told The Compass. “Just had to do it after Mleziva did the cup thing.”

Fr. Mleziva got a kick out of the response to his video, including the challenge by Fr. Getchel. “Look at all that water he’s wasting,” Fr. Mleziva wrote in a reply to Fr. Getchel’s video. “That ain’t Laudato Si, Padre.”

Besides Fr. Getchel’s follow-up challenge, Fr. Mleziva said he’s not seen anyone else try the experiment. “But as you know, the sequel is never as good as the original,” Fr. Mleziva told The Compass.

As for the cold weather, which also cancelled Catholic Schools Week activities for schools in the diocese, Fr. Mleziva said the worst part “is having to continually shovel the snow after it drifts.”

Regarding Catholic Schools Week, Todd Blahnik, diocesan superintendent of Catholic schools, said most, if not all school activities have been rescheduled for next week by diocesan schools.