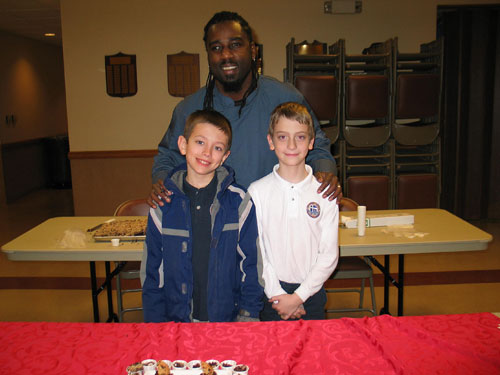 Bishop David Ricken, Franciscan Sr. Dorothy Wagner and Chef Ace Champion served as the judges for the “Crozier Award.” Guests in attendance voted for the “People’s Choice Award.” Cash prizes were awarded for both.

“It’s inspiring to me. I enjoy seeing 8, 9 and 10-year-olds really getting down and dirty in the kitchen,” said Champion. “I was really impressed with their creativity. Presentation is a part of it.”

The celebrity chef planned to infuse video from the cupcake competition into his television show, “Cook Like a Champion” that airs locally on Saturdays at 12:30 p.m. on CW 14. He also invited a member from each team to appear on a future show.

“We mashed up cookies with some cream cheese and powdered sugar,” said Zehms.

“It was supposed to be a peanut butter ball drizzled with chocolate, but we changed it to a natural cupcake,” said McKeown.

The duo planned to donate any winnings to St. John the Evangelist Homeless Shelter in Green Bay. Isabella Allex of “Isabella inspired” won both awards for her Camp Tekakwitha inspired s’mores cupcakes.