DE PERE — Whether he is teaching a cooking class, preparing a meal for a group or filming his television show, Chef Ace Champion hopes that he inspires people to get into the kitchen to cook because the result will likely be healthier food.

“Doctors tell people that they need to eat better, so they will go to the store and see all these foods with labels claiming that it’s healthy. If they read the ingredients, they discover there is nothing healthy about it,” he said. “Try to cook from scratch. Put the ingredients together one ingredient at a time. You will know exactly what you are eating.” 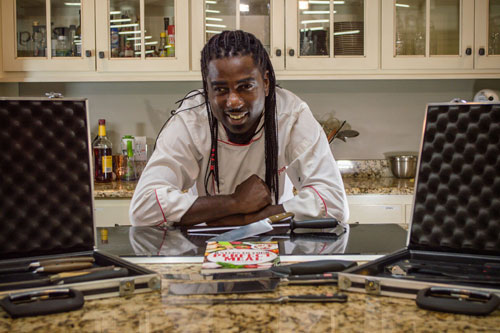 Chef Ace Champion, who has a TV show, ‘Cook Like A. Champion,’ advocates cooking from scratch for healthy eating. (Submitted Photo)

Champion, a Louisiana native who developed his passion for food by helping his mother in the kitchen, understands the fear that many people have about cooking. He encourages the use of online resources.

“When you want to do a new recipe, watch a video,” he said. “In the old days, you couldn’t get a visual. Now, you can follow the process step by step.”

Champion posts videos on his website (chefchampion.com), Facebook and his YouTube channel. The debut episode of the fifth season his television series, “Cook Like A. Champion,” airs at 12:30 p.m. Saturday, April 6, locally on CW14. One of the videos on his website is from last year’s blessing of grapes at the National Shrine of Our Lady of Good Help in Champion.

“Your last name is Champion, your show is called ‘Cook Like A. Champion’ and the shrine is in Champion, so it is meant to be,” he said about the invitation. “It was great. That was my first time at a shrine. There were close to 200 people at my demo. I did a little farm-to-table for them.”

Champion offered some tips for home cooks in an interview with The Compass. He encourages people to cook with “live foods” that are plant or animal-based. Considering the health benefits will help offset any cost concerns, said Champion.

“Someone may pick up a bell pepper in the store, which costs a dollar,” he explained. “That person may think, ‘This is only one ingredient. For a dollar, I can just get a cheeseburger from a fast food restaurant. From a health standpoint, if you look at food as medicine versus poison, that bell pepper is better. What I tell people is food is your probiotic. Good food helps to keep you out of the hospital.”

When cooking with fresh fruits and vegetables, make sure to wash them thoroughly, he added. Fruit and vegetable cleaning products are not necessary to wash away pesticides or chemicals, explained Champion. Water is usually sufficient, but, in situations where a more thorough cleaning is needed, a quart of water mixed with a quarter cup of vinegar may be used.

“If you can get those five out of your diet, you will see results right away,” he said.

Write down your cooking mistakes. This is a tip that Champion practices himself.

“When I started teaching, I burned a lot of stuff,” he said. “My teaching was my failure. My first cooking class, I made at least 12 mistakes. I wrote down everything I did wrong and, the next class, I was able to fix it all. A lot of cooks make mistakes and repeat those mistakes because they didn’t make notes.”

A lack of time to cook is a common claim for many people. Champion addressed time issues in his 2014 book, “8 Steps to Your Perfect Meal.” Doing prep work in advance is one way to manage time, he said.

“Make it the night before if possible and make bigger batches so you have lunch for the next day,” he said.

“Cook 10 chicken breasts, for example,” he added. “Find different recipes using those chicken breasts. You can make a pasta dish. You can have chicken and vegetables one night. You can shred the chicken for sandwiches. Eating is pretty important, so prioritize your time to make good, healthy food.”

Not being able to find ingredients is not an excuse, said Champion. Having worked in restaurants in his home state, he became accustomed to cooking with ingredients such as fresh okra, which can be difficult to find in northeast Wisconsin.

“There’s always a substitute,” he said. “I will also hear people say something to the effect that ‘I didn’t make this dish because it had mushrooms.’ Well then, don’t put mushrooms in it. You can always substitute an ingredient.”

Champion, who gives to 10 charities per year by donating meals as an auction item, also encourages home cooks to concentrate on the end result, not the work involved.

“I’m not totally in love with being in front of a stove for eight hours,” he said. “I concentrate on the outcome and seeing the smiles on the faces when people gather to eat.”

It takes time for a person’s palette to change when moving to a healthier diet, said Champion.

“My favorite quote from Martin Luther King Jr. is: ‘You don’t have to see the whole staircase, just take the first step.’ You take that first step and the next step will unfold,” he said.