Time to support our neighbors

The March 18 announcement that Shopko, a Green Bay-based retail chain, will close all of its stores by mid-June came as blow to people throughout the Diocese of Green Bay. With 39 stores in the 16-county diocese — from Marinette and Sister Bay in the north, to Wautoma and Waupaca in the west, to Kewaunee and Manitowoc in the east, to Kiel and Oshkosh in the south — all of us will be impacted by the decision in one way or another.

Shopko had filed for bankruptcy in February and said it would close about 70 percent of its 363 stores. At that time, Shopko had employed more than 15,000 people around the country and some 5,000 in Wisconsin. 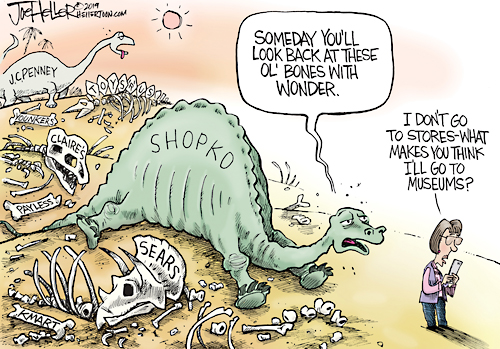 Joe Heller | For The Compass

The demise of Shopko, sadly, is part of a trend for retail chains around the country. Other chains closing stores this year, according to MoneyWise.com, are Payless ShoeSource (2,100 stores) and Family Dollar (390 stores). Sears Holdings, which owns Sears and Kmart stores, is closing 48 Kmart and 72 Sears stores in 2019. About 700 stores were open at the end of 2018, down from about 2,000 in 2013, Money.com reported.

Altogether, according to MoneyWise, more than 5,000 U.S. store closings have already been announced in 2019.

Shopping malls and retail stores have been part of the American experience for generations. Their success has long been a strong indicator of a healthy economy. Why, then, are department stores facing extinction?

Some people point to the convenience of online shopping as the reason retail stores are shuttering. Another theory is the shrinking middle class.

“Far more than Amazon, the cratering of middle-class spending power is driving retail brands into bankruptcy,” according to a 2017 article posted on the 13D Research website, latest.13d.com. “The destabilizing truth of the retail apocalypse: it’s more about inequality than e-commerce.”

“Since 1996, 40 percent of the U.S. population has seen their inflation-adjusted incomes decline,” it said. “Meanwhile, the cost of college tuition, childcare and health care went up 200 percent, 125 percent and 120 percent, respectively.”

When a retail chain fails, it is the local store employees, not the company CEO, to feel the economic pain.

Shopko employees, whose lives and livelihoods are now in limbo, will need the support of their communities, including their faith communities. Parishes can begin by offering special prayer intentions during the Prayer of the Faithful at Mass and other appropriate times. They can post notices of support in parish bulletins and offer opportunities for financial, grief and spiritual support. Pastors, pastoral associates, Catholic Charities counselors, parish nurses and other ministers have opportunities to be the hands of Christ for many of their neighbors, whether or not they belong to the local parish. It’s what we are called to do.

For our friends and neighbors affected by the Shopko closings, know that you are in our prayers and that the church is here for you.

Whether Shopko and other retail stores’ demise is a result of an outdated business model, a shrinking middle class, overextended CEO compensation packages or a combination of all, it does not change the sorrow experienced now by the soon-to-be unemployed laborers.