PESHTIGO — In addition to the numerous patents displayed at Evergreen Tool Company, the decor on the walls includes framed artwork by the children of owners Joe and Beth Beranek. A piece by their daughter, Gabrielle, symbolizes the focus on family and faith the Beraneks, members of St. Mary Parish, try to instill in the business. The black and white drawing is of the old St. Mary’s Cathedral in Chicago.

In 2013, Joe and Beth purchased Evergreen Tool, an existing company located in Menominee, Mich. Joe had worked at the company for four years with the agreement that they would buy the business. In 2016, they moved into their current shop in Peshtigo, which they built to essentially combine two businesses into one. 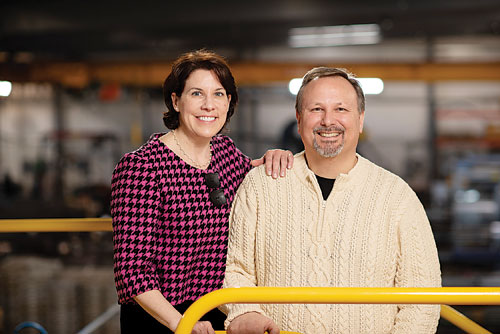 Beth and Joe Beranek are the owners of Evergreen Tool Company in Peshtigo. The Illinois natives said that involvement at St. Thomas Aquinas Academy and the parish community has been a good way to get to know people. (Scott Eastman | For The Compass)

Evergreen Tool manufactures mostly steel and some plastic components mainly used in fire suppression and components for companies, including KI and Renco.

When Evergreen operated in Menominee, the business was only marketing, sales and assembly. It didn’t have machines to make the components.

“When we bought the business, we knew, in order to compete against Chinese imports, that we would have to control our costs better,” said Joe. “Our screw machine vendor was Hasselblad Machinery in Green Bay.”

Hasselblad was going to close its doors, so the Beraneks purchased the equipment. They ran two facilities for a year before moving all operations into one facility in Peshtigo.

“We were able to entice our employees who lived in Green Bay to drive to Peshtigo,” said Joe. “In the last six months, we’ve put on an addition to this place.

“We have 27 employees, 18 full-time,” he added. “We’ve been very lucky. We’ve been able to hire some retirees who come in and give us 10 to 20 hours a week. We are not an assembly line shop, so we can run a machine today and if we don’t run it tomorrow, we will be OK. We run two shifts.”

Joe grew up as the youngest of nine children in a Catholic family in the Chicago suburbs.

“My parents were always involved in the church,” he said. “Seminarians would always hang out at our house.”

Beth is from Peoria, Ill. She converted from the Presbyterian Church to become a Catholic within the last 12 years. She credits Sr. Helen Plum, a School Sister of Notre Dame who served as pastoral leader at St. Mary Parish, for her guidance throughout the Rite of Christian Initiation of Adults (RCIA) process.

“I just decided that I wanted to experience the Mass fully with my kids,” said Beth. “I was the one who said that I would never convert.”

The Beraneks, who were married in 1991, made their way to Wisconsin in 1998 when Joe took a position at a company in Marinette.

“Our oldest son was a year old when we moved here,” said Joe. “We were going to be here for five or six years and then go somewhere else. Now he’s a senior in college and we have four kids.”

Evan attends Drake University in Des Moines, Iowa, Gabrielle is a sophomore at The Catholic University of America in Washington D.C., Halle is a junior and Izak an eighth grade student at St. Thomas Aquinas Academy.

Beth was in charge of Home and School at St. Thomas Aquinas for a number of years, helps coordinate the annual holiday home tour fundraiser and assists with auctions to benefit the schools. She serves the parish as an Alpha coordinator. Joe served on the board of education and as a member of the athletic club. He also served on the diocesan board of education, including one year as the chair.

“I think for us, because we are transplants here, it was a way to become involved in the kids’ school and get to know that extended family,” said Beth.

“It is such a good family atmosphere (at St. Thomas Aquinas),” she added. “I could be involved and bring the other kids with me before they were in school.”

The extended family at the parish includes an older Polish couple that befriended Izak.
“He just connected with them,” said Beth. “After communion, when he was around 2, he would stand at the end of the pew and give high fives to people. That’s how they first got to know him.”

The Beraneks are thankful for the role faith plays in the lives of their children. All four have ministered as altar servers. Following graduation in the spring, Evan will be serving a two-year commitment with Fellowship of Catholic University Students (FOCUS), where he will disciple to students on a college campus. Evan and Gabrielle regularly participate in adoration throughout the week. Halle and Izak are both Young Vincentians through the St. Vincent de Paul Society.

“They are better Catholics than we are,” said Beth with a laugh.

Beth’s and Joe’s faith serves as a guide to how they treat their employees. In addition to adding health insurance, 401k and bonuses, they promote family in the day-to-day operations.

“Some of our employees have brought in their kids when they were sick,” said Joe. “If we really need them to work and they don’t want to take time off, (the children) will sit on the couches in the lobby and play on a computer or read books. If it’s really bad weather, we have a mother of two girls who will bring them in and they will ride bikes in our new area because there is not a lot of machinery in there. We have hired some of the employees’ kids over the summer.”

One of the Evergreen Tool mission statements summarizes the positive atmosphere the Beraneks desire in the workplace.

“We want to have a place where employees feel comfortable coming in; vendors feel comfortable working with us, they don’t feel cheated; and customers find good value in what we do,” said Joe in reference to the mission statement. “Our kids work here over Christmas and over the summer. We want them to be in a really safe and clean environment. We preach to people to try not to swear and no off-color jokes and I think people appreciate that.”

To recognize those in business who promote the common good, The Compass invites leaders and parish leadership to nominate candidates for the fifth annual “Faith That Works” Awards. Click here to learn more.