APPLETON — “For a long time, people have been waiting for this legislative cavalry to show up and, with one sweep of their swords, make abortion illegal. I think it’s pretty clear that that isn’t going to happen,” said Abby Johnson, whose life story is depicted in the movie, “Unplanned,” which opens nationwide on March 29.

“We have to start focusing on making abortion unthinkable in our society, our communities and our churches,” Johnson told The Compass in a telephone interview March 13. 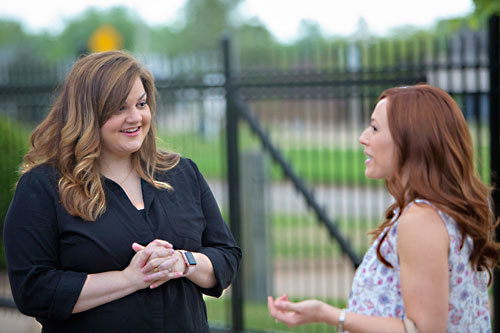 Abby Johnson, left, is seen on the set of the movie “Unplanned” with actress Ashley Bratcher, who plays her. The movie details the story of Johnson, a former Planned Parenthood administrator who quit that job to join the pro-life movement after her upclose interaction with abortion. (CNS photo | Courtesy Unplanned)

That is exactly what Johnson hopes will happen after people see “Unplanned,” which is adapted from her best-selling book, “Unplanned: The Dramatic True Story of a Former Planned Parenthood Leader’s Eye-Opening Journey across the Life Line.”

The movie offers a stark depiction of what goes on in an abortion facility and the abortion industry itself. Johnson, during her eight-year career with Planned Parenthood, was the youngest person to be appointed director of one of their clinics. She quit her job in October 2009 after participating in an abortion procedure for the first time.

After leaving the building, she walked down the street and joined Coalition for Life. Currently, Johnson is the CEO of the nonprofit organization, And Then There Were None (ATTWN), that was established to help abortion clinic workers leave the industry.

“Unplanned” is billed as a pro-life movie, but Johnson knows that people from both sides of the abortion debate will be in the audience. “Pro-choice people will go as critics. I would have gone when I worked at the clinic just to see what they were saying about us,” she said. “I hope there’s a huge campaign against this film. The more they’re talking about it, the more people are going to be intrigued.”

Screenings of the movie have shown promising results, she said.

“We’ve already heard stories of people who are pro-choice who have gone to various screenings and said, ‘My opinion has now changed on abortion,’” Johnson added.

Even though “Unplanned” doesn’t fit the typical criteria for an R-rated movie, it has been rated R. A child under the age of 17 can’t see the film without a parent, Johnson pointed out, but most state parental involvement requirements for abortion include a judicial bypass procedure allowing minors to receive court approval for an abortion without parental knowledge or consent.

“They’re saying that it depicts violence. They stumbled backwards into the truth by admitting that abortion is violent,” she said.

Abortion is not only violent, but Johnson, who had two abortions as a young woman, knows it can be agonizingly painful as well. “That’s what’s not being told to the patients. Our culture has sanitized abortion. This shows the reality of abortion, which is desperately needed right now,” she said.

Johnson said that the average abortion clinic worker really doesn’t know what goes on inside their clinic.

“I didn’t know very much until I got into upper management and started seeing it for myself,” she explained. Working in the “Products of Conception” room, where babies are pieced back together after an abortion to make sure the procedure was complete, didn’t bother Johnson at all.

“It confirmed what I already believed about the baby, that it didn’t have rights, it wasn’t alive. It was waste,” said Johnson. “We were trained not to think about the unborn child. The woman’s rights always supersede the rights of her child in the womb.”

The clinic Johnson ran in Texas has closed. “There’s been a 30 percent decrease in abortion in Texas because of pro-life legislation,” according to Johnson. “Getting involved at the state level really does make a difference. Praying outside of clinics is very important, too, not just for 40 days a year,” she said, alluding to the 40 Days for Life campaign that is held at several different sites around the Diocese of Green Bay.

“If you want a woman to choose life, you have to be out there to offer her resources, hope and options — three things she won’t receive if she walks into that abortion clinic,” said Johnson.

Since her departure from Planned Parenthood, Johnson has not only become pro-life, like her husband, Doug, but the couple, who had one child at the time, has truly become open to life. On Easter Sunday in 2012, they joined the Catholic Church. This June, they will be welcoming their eighth child into their family.

Bishop David Ricken had the chance to attend a screening of “Unplanned” with other diocesan staff members on March 12.

“I would encourage parents and adults to see this movie,” he said. (Read Bishop Ricken’s column at this link.) “I think parents should prayerfully consider showing the film to their teenage children who are old enough to be faced with this decision. It makes clear what abortion is in a very striking way.”

“Unplanned” will open in 800 theaters, but Johnson is hoping to get it into 2,200 theaters across the country.

“The goal is to get people into these theaters to watch this film and have a ton of conversions on the issue of life,” she said.

She also hopes the film will open hearts and minds of all Catholics.

“Over 50 percent of women having abortions are coming from our churches. The only way we’re going to make this unthinkable and make some significant progress is if the church steps up,” said Johnson.  “I wholeheartedly believe that God is going to put the right people in that theater to see this film. I’m excited to see what happens.”

Wisconsin Right to Life is sponsoring a screening of “Unplanned” on Thursday, March 28, 7 p.m., at the Marcus Bay Park Cinema, 755 Willard Drive in Ashwaubenon. Tickets are $7 and must be purchased online at wrtl.org/events. For more information contact Maddy Laufenberg, (414) 308-1058.