KIMBERLY — Sissy Mertens hasn’t decided on a saint’s name for when she fully enters the Catholic Church at the Easter Vigil at Holy Spirit Parish in Kimberly.

However, she might want to consider the Maid of Orleans because that’s how her RCIA sponsor, Sarah Elmer, thinks of her.

“(Sissy) definitely has a childlike faith … not childish … but full of wonder and joy and enthusiasm,” said Elmer, who is also youth minister at Holy Spirit. “She is so incredibly brave as well. She isn’t afraid to ask questions, isn’t afraid to learn the tough answers, isn’t afraid to live like Christ has just lit her soul on fire. If I were to picture Joan of Arc, this girl’s face would be my modern-day Joan.” 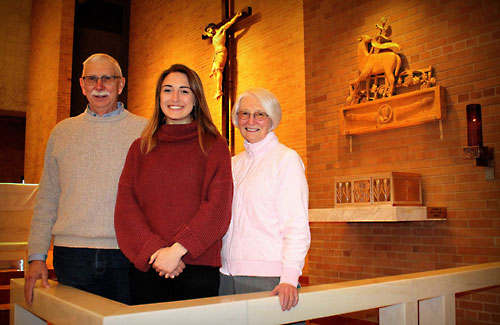 Sissy Mertens, 18, is pictured with her catechist sponsors, Richard and Catherine Depies, near the tabernacle at Holy Spirit Church in Kimberly March 31. Mertens will receive her first Communion at the Easter Vigil on April 20. (Brad Birkholz | For The Compass)

Mertens, a senior at Kimberly High School, was raised Lutheran — baptized and confirmed in that faith. However, she recently decided that she wanted to become Catholic.

“My mom’s good friend is Catholic, so we would go to church with them,” said Sissy, 18. “And my grandparents (Tom and Kathy Mertens of Brillion) are Catholic and my dad was confirmed Catholic. And I would go (to Mass) with my grandparents. So it was always kind of around me, but I didn’t start actually participating until I went on the mission trip with Holy Spirit.”

Sissy attended Sunday school and church services at Christ the King Lutheran in Combined Locks. However, after a change in pastors, her family “didn’t go as often.” So Sissy, who will graduate from Kimberly High School June 5, started attending Mass with friends at Holy Spirit.

Then, a couple of years ago, she was invited along on the parish’s Catholic Heart Work Camp for students, traveling to Omaha, Neb.

On that first mission trip to Omaha, Sissy and several other girls shared a large room with Elmer.

‘Can I become Catholic?’

“One night after we had sung songs,” Sissy remembers, “I went back to our room and I asked (Sarah), ‘Can I become Catholic?’ And she got so excited and said, ‘Of course!’ That’s when the process got started.”

“True to Sissy style, she just said what she was feeling,” said Elmer. “Tangible, excitable curiosity on how to become Catholic. Did it take me by surprise? After 14 years of having youth ask me deep questions at the strangest of moments, yes, the deep questions will always take me by surprise. It’s something that I hope for, pray for, strive for, but acknowledge that most of the time seeds are being planted and it needs to be the ongoing work of the Holy Spirit, not Sarah.”

Mertens later asked Elmer to be her RCIA (Rite of Christian Initiation) sponsor.

“I have to say,” Elmer told The Compass, “when she asked, I was so honored. Besides the great joys of marriage and motherhood, this is next in line for me. I have sponsored confirmation candidates before, but not an RCIA candidate so this was new territory.”

While Elmer is Mertens’ RCIA sponsor, her teachers — her “RCIA catechist couple” — have been Catherine and Richard Depies. She and the couple, who have 20 years of RCIA and religious education experience behind them, meet every week for up to one and one-half hours. Their main source of instruction comes from RCIA materials and the “United States Catholic Catechism for Adults.”

And, as they all agree is usual for Sissy, there were many, many questions.

“The old saying is, ‘When you want to learn something, you teach,’” Richard said. “When you decide to teach someone, you learn. So that’s the process I’m going through. I learn as much as Sissy does.”

For her part, Sissy said she’s always felt able to discuss any topic with the Depies. She also appreciates that the RCIA process offered her an opportunity that many high school students in “confirmation classes” might not have.

“I feel really lucky to be learning, but I feel I learned a lot more the way I did it,” she said. “It’s more personal and I could ask whatever I wanted.”

She also credits the support of friends at high school, her grandparents and her parents, Carrie and Dave Mertens.

When asked what most drew her to the Catholic faith, Sissy replied, “I really like the structure of the church. It feels really stable and safe and comfortable. It feels like one big family. I just agree with everything they say and enjoy it.”

She is also looking forward to holy Communion.

“Even though I have taken Communion a number of times (in the Lutheran church),” she said, “it’s different because (here) you believe it’s the actual body and blood. I’m excited to get the strength from the Eucharist.”

She is also “excited” about her first confession. Like many other people facing confession, Sissy is a little nervous. “There are a lot of questions,” she said. “I’m going to have to bring a sheet to read it.”

Catherine immediately reassured her: “Don’t think you have to go in with a shopping list. … It’s the sincerity of your confession overall.”

After Sissy is fully welcomed into the Catholic Church, she hopes to become more active in the faith and has already signed up for this summer’s Work Camp trip to Louisville, Ky. She’s also a member of Holy Spirit’s Chazoo Warriors’ peer counseling group, led by Elmer.

Sissy looks forward to her continuing journey as a Catholic and is grateful she found this path when she did.

“I don’t know what happened, but I just wanted to do it,” Sissy said. “Everyone has that want inside of them — I just figured out what mine was. It’s definitely God pushing me to do it.”