Editor’s note: Bishop David Ricken will ordain three men to the permanent diaconate on Saturday, May 18. Here The Compass profiles Darrell Lubenow. Click on the following names to read profiles of the other deacon candidates:

ASHWAUBENON — Six years ago, Darrell Lubenow finally said “yes” to God’s call. He had felt a call to the priesthood years ago, many times, and always denied it. While praying at the National Shrine of Our Lady of Good Help in Champion, he decided that it was time to pursue the diaconate. Lubenow will be ordained a deacon on Saturday, May 18, at St. Francis Xavier Cathedral in Green Bay. 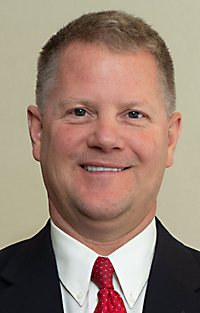 Lubenow, a Howard’s Grove native, grew up as a member of St. Clement Parish in Sheboygan. His late parents, Donald and Marilyn, served as faith role models.

“My dad was the strongest Catholic in the family,” he said. “That was the example that was sent down to me. He would go to daily Mass and hand out rosaries, which I didn’t know until he died. Some people came to the wake service and told me that.”

Ministry started at a young age for Lubenow. He was an altar server before moving to a new role.

While working in Oshkosh, Lubenow met his wife, Kim, who was a teacher. She has two sons from a previous marriage, and together, they have a son, Nicholas.

“Cory and Matthew are my stepchildren, but I consider them my children,” said Lubenow. “I was transferred to Green Bay, so we decided to move up here. I was into the corporate life. They wanted me to move to Canada to be a vice president, but I turned it down.”

Lubenow quit his job in 1997 to start his own company and needed income before Lubenow Companies Inc., a logistics and transportation company, opened in 1998. He became an adjunct instructor at Northeast Wisconsin Technical College (NWTC) in Green Bay and Silver Lake College of the Holy Family in Manitowoc. He challenged graduate students in one course in Manitowoc to make a difference in the community.

“I would make them go out and do real-life projects in the community that would do good,” he said. “Anyone can get a master’s degree, but show me that you can use it. I had one group go to the Holiday House and put together a thesis on building an adult daycare. They did it. I was even at the groundbreaking. I had another group in Sheboygan put a marketing plan together for the food bank.”

Lubenow’s faith home has been Nativity of Our Lord Parish in Ashwaubenon for 23 years. All the pastors during his time as a parish member have influenced his call to the diaconate, he said. Fr. Jack Harper “was the one who really pushed me” to be a deacon.

Lubenow has served Nativity as sacristan, a lector, finance director and altar server on Fridays for Fr. Jim Hablewitz when he was pastor. He also visited senior communities and led Liturgy of the Word with Communion a couple times a month at the church. He will serve as a deacon at Nativity. His appointment will also include chaplaincy at HSHS St. Vincent Hospital and HSHS St. Mary’s Hospital Medical Center, both in Green Bay.

“When my mother was in the hospital many years back, I witnessed a hospital chaplain in action in the waiting area at St. Luke’s in Milwaukee,” he explained. “The person had just died of an aneurysm, and (the chaplain) was the one who had to break the news. People were hitting the wall and going into shock. The chaplain, a Lutheran minister, did such a great job. Her presence planted that seed. I thought to myself, ‘That interests me. That’s a ministry.’ She had to be really courageous. That inspired me to pursue hospital ministry.”

Lubenow’s ministries at Nativity will be defined following ordination and in consideration of his chaplaincy schedule. He looks forward to serving with Fr. Mike Ingold, pastor, and Deacons John Bundra and Mike Dabeck. Lubenow welcomes preaching opportunities as a deacon, even though he found homiletics to be his toughest course in formation. It surprised him because he does public speaking and leads seminars in the business world.

“It really taught us to keep it simple and get the word out,” he said. “When you realize that you are responsible for God’s word and God’s message and how the flock interprets it, that’s kind of intimidating until you get used to it.”

He also looks forward to the sacraments as a deacon.

“I’m excited to be that instrument in Christ,” he said. “We are all instruments to be used by God.”

Lubenow’s business has approximately 60 employees. He also serves as the regional vice president of Echo Global Logistics in Green Bay. Both companies share values of serving the community. Employees provide a monthly meal at the New Community Shelter in Green Bay. Lubenow Companies participates in Hauling For Good, a campaign that donates proceeds to help fight pediatric tumors. Lubenow is open about his faith in the workplace. He has what he calls “tools of the faith” in his office, items, including a cross made by his son, Matthew, which represent his faith.

“It’s not a perfect cross, nor are we,” said Lubenow. “That reminds me that none of us is perfect.”

All three sons, now adults, will attend the ordination. Cory and his wife, Janet, live in California; Matthew and his wife, Caity, reside in Florida; and Nicholas is a law student at Marquette University in Milwaukee. Lubenow said that he could not have answered the call without Kim’s support.

“My wife has grown through the process just as much as I did,” he said. “She looks forward to helping out with marriage prep and baptism prep. She hasn’t run away.”

He also points to Joe Leisgang, a member of Nativity of Our Lord Parish, for inspiring him to get involved in ministry. Lubenow credits Fr. Luke Ferris, his spiritual director, and Deacon Nick Williams, his deacon mentor, for their guidance.

“So many people touch you on the journey,” he said. “I think that, through formation, you realize that people are being put before you by God. How you take the moment to listen, to understand, to minister, makes a difference if you are living the call.”