Editor’s note: Bishop David Ricken will ordain three men to the permanent diaconate on Saturday, May 18. Here The Compass profiles Tim Stevenson. Click on the following names to read profiles of the other deacon candidates:

SHERWOOD — When it comes to his less-than-stellar catechesis during his school years, Tim Stevenson has two theories.

“Either I wasn’t taught very well when I was a kid or I wasn’t listening,” he said. “But, I think the church is willing to admit that in the ’70s and ’80s they didn’t do a very good job (catechizing youth.”

Chances are Stevenson isn’t the only one who wasn’t taught the basic fundamentals of the Catholic Church during his youth, so after he is ordained to the diaconate on May 18 at St. Francis Xavier Cathedral in Green Bay, one area he would like to focus on is adult faith formation. 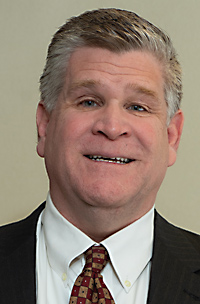 “You need to do what gives you energy because energy will radiate to who you’re serving and working with,” said Stevenson. “I’ve been involved the last few years doing different studies and programs (with adults). It’s fun to guide people along the way and watch them catch fire, (especially if they weren’t catechized properly). The energy is really great.”

Stevenson grew up at St. Paul Parish in Combined Locks and graduated from Kimberly High School in 1981. He earned an IT degree from Fox Valley Technical College in Appleton and is a software engineer at Skyline Technologies in Appleton.

Stevenson said he never considered pursuing a religious vocation when he was younger.

“I paid attention, following the missalette during Mass, but that was about as close as I got,” he said. The call to become a deacon was a gradual process.

“At some point, I decided I wanted to understand more of the meaning of life. You see all these different religions out there. Being a tekkie guy, I wanted to know the facts, so I started exploring the history of Christianity from the beginning,” he explained. “I was really curious. I had books stacked all over. As I learned more, it became evident to me that the Catholic Church has been around since the beginning.”

According to Stevenson, the Holy Spirit promoted him along the way and laid down the “stepping stones” for him to follow to discern his vocation.

“People would cross my path, opportunities would present themselves — maybe it was becoming a catechist, becoming a Communion minister,” he said. “Even Bishop (David) Ricken is part of it because when I was first approached to be a Communion minister I said, ‘I’m not worthy to do something like that.’ (But then one day) I was listening to Bishop Ricken on the radio presiding over a Mass and he said, ‘And me, your unworthy servant.”

Stevenson said he thought, “Woah, if (the bishop) says he’s unworthy, maybe God can use just about anybody.”

Stevenson noted that even his wife Shelley pointed out to him that he should consider becoming a deacon and at the time she wasn’t even Catholic. She joined the Catholic Church after he began formation.

“During another of those little promptings, the Shrine in Champion was approved as a Marian apparition site,” said Stevenson. “The message that was given (matched) up with where I was at. ‘Teach the children. Teach them what they need to know about salvation and how to cross themselves.’ That really resonated with me. Our generation needs to get back on track with all that.”

The Stevensons live in Sherwood with their son Noah, who is a junior at Xavier High School in Appleton. Their older son Alex is in the U.S. Navy. They belonged to St. Bernadette Parish in Appleton for more than a decade.

“That’s where some of the call to the diaconate came,” said Stevenson.

Last year they joined St. John-Sacred Heart Parish in Sherwood, where he has been appointed to serve following ordination.

One of the more nerve-wracking experiences for Stevenson anticipates as a deacon will be serving as a homilist, he said.

“Of all the things, getting in front of people was the least thing I was looking forward to,” he said. “Homeletics was a three-month class — how do you prepare a homily, how do you deliver a homily. It’s sort of a capstone class because you’re taking everything you learned over the last four or five years and putting it together.”

At this point, Stevenson said he’s ready to deliver homilies and expects to do so once a month to help out Fr. Mike Betley, the pastor, who presides over five Masses each weekend. He’ll have a diverse audience.

“It’s rural, farmers, people who are getting near retirement, empty nesters, young families,” said Stevenson. “It’s a cool mix of people in our parish.”

Deacon Ken Kabat serves as Stevenson’s deacon mentor and Fr. Michael Warden is his spiritual director. Something Stevenson hopes to do is help bring fallen Catholics back to the faith. One way to do that is by promoting the ALPHA program.

“The way it’s structured, you have a meal together and you watch something that is thought-provoking, break into small groups. Over time you build a rapport with your group and it really helps. I’ve been in groups where they say the Catholic Church is finally doing it right. We all should be doing this, being welcoming and supportive. Fellowship is really huge.”

Years from now, how will Stevenson know he’s made a difference?

“One of the biggest things will be, do people know Jesus better? Do people understand their faith better, are they more engaged? Are they more comfortable talking about their faith with others? Do people know why God created us — to know him, to love him, to serve him?” he said. “That order matters, because you can’t really love somebody you don’t know; you’re not going to serve somebody you don’t love. That was the progression for me, so I want to help get people get to know the Lord.”