NEW LONDON — Carolyn Lefeber, the daughter of Joe and Liz Lefeber of Hortonville, would probably have considered herself a typical Catholic teenager until she participated in an event that changed not only her faith life, but her life as a whole.

Lefeber, a senior at Hortonville High School, attended her first March for Life in Washington D.C. in 2016 when she was a freshman. Her older sister (Lefeber is one of six children) had attended the year before and her experience made Lefeber want to make the trip. “I always had the idea that abortion is wrong and being pro-life is right. I was starting to really get into my faith, so I decided that I wanted to see D.C. and experience it with a group of (like-minded) people,” recalled Lefeber. 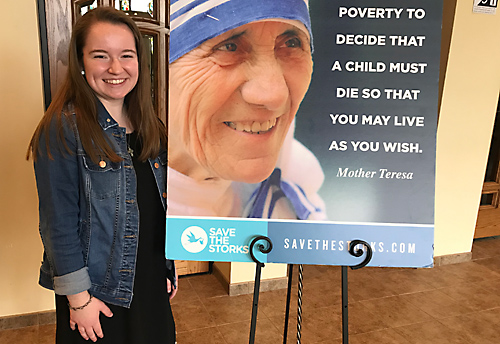 Your Catholic Neighbor: Carolyn Lefeber (Amanda Lauer | For The Compass)

She said a leadership team of high school students who have attended past marches are asked to lead youth who are on their first march. “Those leaders were amazing. What got me the most was all of the positive energy from that,” said Lefeber. Their example led her to offer to volunteer on core teams for other diocesan teen events.

“Every year at the March for Life they encourage us to live the pro-life lifestyle when we come back home. We don’t have to be in D.C. to be pro-life,” she said. There are so many local places that we can go to — Mother & Unborn Baby Care is a pro-woman, pro-baby place that people can turn to in our area. They are looking for donations all the time.”

The summer following her trip to Washington, Lefeber attended a Steubenville Youth Conference. This annual event, held at various locations around the United States, provides an opportunity for more than 50,000 Catholic teens across North America to “encounter the God who calls us his sons and daughters,” according to the group’s website.

After attending that first conference, Lefeber took a leadership position on their core team. This summer she will be volunteering on the main campus at Franciscan University of Steubenville in Ohio. “It’s really awesome and humbling to be mentor for these kids who have never done anything like this before,” she said.

Because of the values they share and the bonds they’ve created, some of the teens decided to create an annual social event open to all Catholic high schoolers in the diocese and around the state. “We have friends that we met at the March for Life and on other trips from all over the diocese,” said Lefeber.

The Catholic Formal, otherwise known as the Catholic Prom, debuted three years ago and has been held each May at St. Katharine Drexel Parish in Kaukauna. Lefeber attended the dance her freshman year was on the committee her sophomore year, and last year was given the task to chair the event. She and Sarah Oestreicher are co-chairing the event this year.

The dance is more casual than a traditional prom. Attendees can come on their own, with a date or with friends. Formal dress is optional. Food or beverages are brought by the guests, a student disc jockey supplies the music, and the cost is $5 with the donation of a canned good, or $10 with no food donation.

The food is donated to a local food pantry and a good portion of the proceeds are donated to charity. Last year and this year the money was gifted to Mother & Unborn Baby Care.

KREWE is an acronym for Knowledge of Christ, Responsibility to Community, Everything is Gift, Witness through Sacrifice and Evangelization to Peers, explained Lefeber.

“This was just started two summers ago with the idea of forming teens in our diocese to evangelize to our peers. It’s not just a one-time thing like the Steubenville or March for Life trip,” she said. “It’s all the time, 24/7. ‘How do we be a real disciple for Christ?’ They form you so deeply in that. I was on the first team for that.”

Catholic teens should consider getting more involved in their faith, said Lefeber.

“By stepping out of my comfort zone for the first time to go on a trip, my entire life has been changed,” she said. “It’s changed my outlook on life. If there’s ever an opportunity that comes up, you should definitely go, even if you’re a little nervous about it.”

This fall, Lefeber will attend Fox Valley Technical College to earn a degree in event management with the goal of working for the Green Bay Diocese when she graduates. “I love this diocese so much,” Lefeber said. She shares the same enthusiasm for her faith.

“Every time I walk into … any Catholic church, I feel like I’m home and that’s where I’m meant to be,” she said.

Words to live by: “Ad Maiorem Dei Gloriam: For the Greater Glory of God.”