‘Yes, I could see that in you,’ others told Kozlovsky

Editor’s note: Bishop David Ricken will ordain three men to the permanent diaconate on Saturday, May 18. Here The Compass profiles Dennis Kozlovsky. Click on the following names to read profiles of the other deacon candidates:

GREEN BAY — Dennis Kozlovsky received more affirmation than invitations about his call to be a deacon.

“I had more people approach me after I announced that I had decided to pursue the diaconate,” he explained. “They said, ‘Yes, I could see that in you.’ My sister-in-law mentioned it to me; the best man in our wedding. I don’t know if there was really anyone who asked the question: ‘Have you considered becoming a deacon?’” 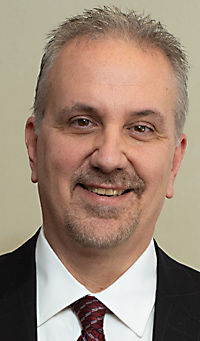 Kozlovsky points to a pivotal moment in his call. He scheduled a meeting with Fr. Mark Vander Steeg, pastor of St. Bernard Parish in Green Bay, where Kozlovsky has been a member since 1991. He asked for the sacrament of reconciliation because it had been several years since his last confession. He told Fr. Vander Steeg that he was unaware of exactly how long it had been.

“Father was just caring and loving,” said Kozlovsky. “He said, ‘Dennis, that doesn’t matter, you are here now.’ I had my confession and then I said, ‘Do you have a few minutes? I would like to talk to you.’ He kind of leaned in towards me and said, ‘I have all the time you need. Do you want to talk about becoming a deacon?’ I just started to cry because I had not shared that with anybody.”

Fr. Vander Steeg had recognized his reverence in worship and prayer.

“It melted my heart,” said Kozlovsky, who will be ordained a deacon on Saturday, May 18, at St. Francis Xavier Cathedral in Green Bay.

All Saints Parish in Denmark was home to Kozlovsky during his youth. He was an altar server growing up and his late parents, Victor and Mary Kozlovsky, were very involved in the church. He recently honored their faith.

“My mom passed away in 2016 and my dad just last year, in 2018,” he said. “My parents left a small sum of money for All Saints. … I suggested that an ambry be built for the blessed oils. I had it constructed and we brought it to the church the week before Holy Week.”

Kozlovsky’s ministries at St. Bernard have included sacristan, leader of Liturgy of the Word with Holy
Communion, finance council member and trustee-treasurer for the parish council. He has also provided Liturgy of the Word and one-on-one care ministry at senior communities, and has served as a chaperone on several youth ventures including SHINE trips to Rochester, N.Y., and Detroit, and Steubenville Youth conferences in St. Louis and St. Paul, Minn.

The parish has also provided him opportunities to do wake and vigil services and committals. His first class in formation for the diaconate in 2014 was the ministry of leading prayer, which covered those services and Liturgy of the Word.

“I was so nervous when we had to do our practicum,” said Kozlovsky, with a laugh. “They split us up in groups and one of the team leaders was our witness and would critique us. Now I’ve done that type of liturgy many, many times. It seems like that was so long ago.”

Kozlovsky also looks back fondly on how his prayer life has grown. He purchased a breviary at the beginning of formation and immediately started with morning and evening prayer, which will continue as a deacon.

Prince of Peace Parish in Green Bay will be Kozlovsky’s diaconate appointment.

“I’m excited about the newness of it,” he said. “I will miss St. Bernard. The people have been so welcoming and gracious, keeping me and my family in their prayers.”

Kozlovsky has some history with Prince of Peace. He started Liturgy of the Word with Holy Communion at Oak Park Place, an assisted living facility in Green Bay, when his father was a resident. The facility is under the care of Prince of Peace.

“I will likely go back and continue on with that experience,” he said. (Deacon Jeff Prickette, new pastoral leader, and Deacon Bill Burkel) would like me to work with the marriage preparation couples. I am joining (Deacon Burkel) to meet with a couple going through marriage preparation. I will get more into baptisms. I’m meeting with a couple at St. Bernard that does baptismal prep. Between St. Bernard and Prince of Peace they are both getting me additional experience.”

Kozlovsky is currently scheduled to preach at Mass once every other month. He hopes to draw on his personal experiences for homilies. Kozlovsky and his wife, Ann, have an adult daughter, Nicole. He is vice president of underwriting at Bank First National in Manitowoc and has spent nearly his entire professional career in the banking industry.

“Our homiletics instructors were Fr. Paul Demuth and Fr. Dan Felton and we had Deacon Tony Abts (diocesan diaconate director),” he explained. “Fr. Paul wore a sweatshirt with the word ‘Sermonator’ on it. We have some big shoes to fill. They suggested that if you can involve your personal experiences, that’s what a lot of parishioners can relate to and would like to hear.”

Kozlovsky describes Ann’s support as “immeasurable.” He points to the influence of other deacons along the way, especially Deacon Dave Scheuer, his deacon mentor. They will continue to meet following ordination.

“Also, just being a member of St. Bernard, Deacons Bernie Terrien, Larry Mastalish and Keith Holschbach, I’ve been able to witness them assisting at Mass, at the altar, just watching them and listening to them proclaiming the Gospel and giving homilies,” said Kozlovsky.

“(Norbertine) Fr. Jay Foster is my spiritual director,” he added. “I’m thankful for his many prayers and for guiding me along the path to righteousness.”

Kozlovsky expects his thoughts on ordination day to turn to his parents.

“My dad was 97 when he died,” he said. “He always said that he wanted to make it to my ordination. Unfortunately, he won’t be there, but will be in spirit. I think that they will be heavily on my mind. I’ve kept a rosary from both my mom and dad and probably will have both in my pocket come ordination day. That will be my connection to them.”