APPLETON — Lee Reynebeau considers himself the “bagel and coffee guy” for the men’s faith group that meets at 6:30 every Wednesday morning at St. Bernadette Church in Appleton. He actually has a slightly more significant role with the group, as it was his collaboration with Deacon Tim Stevenson of Sacred Heart Parish in Sherwood that brought this fellowship into being six years ago. 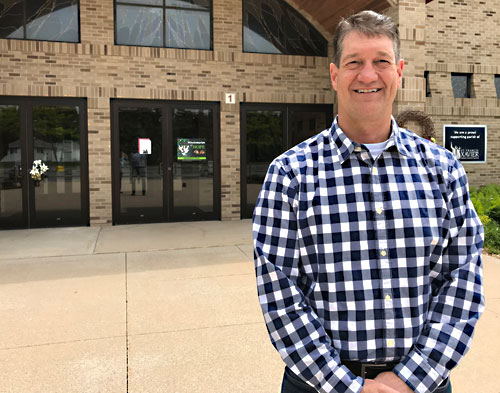 Your Catholic Neighbor: Lee Reynebeau (Amanda Lauer | For The Compass)

About 40 men, from more than a half-dozen parishes, are part of the group, with about 20 to 25 attending each week to take part in a book study and discuss topics pertaining to their faith. Reynebeau described how the group was formed.

“Years ago, we had a group called Connect, a regional group, like a Theology on Tap for guys. It was speaker-based, but sometimes the best time was after the meeting when people were sitting around talking — we had great conversations,” he said. “That dissolved and four or five years later this idea, I think it was from the Holy Spirit, came out of nowhere. I thought, ‘We should start another group but it’s going to be that after-meeting group without a speaker where everyone’s sitting around the table talking.’”

The original text they worked from was a book titled “Signposts: How To Be a Catholic Man in the World Today.” It was designed to be a one-year study, but took the group four years to get through. Currently they are working their way through “The Screwtape Letters” by Catholic author C.S. Lewis.

The Screwtape Letters comprises 31 letters written by a senior demon named Screwtape to his nephew, Wormwood, a younger and less-experienced demon, charged with guiding a man to “Our Father Below” (Satan) from “The Enemy” (Jesus).

To update this classic piece of work, Deacon Stevenson converted the 31 letters into text messages going back and forth between the senior demon and the junior demon. “This is phenomenal what Tim put together,” said Reynebeau.

During a session, two men in the group play the parts of Screwtape and Wormwood and read through the letter under discussion. A real-life example of something similar to the letter is given along with several questions to create conversation.

“We do go off topic,” admitted Reynebeau. “We’ll always have a topic for that lesson but it will be open. We go where the conversations lead us. This is not a Bible study. This is not a formal educational type thing, nobody here is the teacher. It takes us a month to go through one letter. Nobody’s rushing us. The rapport that we have, that’s where people will open up a little more. There’s a lot of bantering going on, too.”

Before the meeting starts, the men have the option to do the Liturgy of the Hours in church at 6:10 a.m. which is led by Deacon Stevenson. After that the whole group meets in the St. Bernadette resource room.

Reynebeau would love to see men’s faith groups formed at every church in the diocese. It only takes a couple people to form a group, he said, and the material is already in place. He said he and Deacon Stevenson would be willing to help other groups launch one like theirs. “We would meet with them, share with them what we did in the past and tell them what worked and what didn’t work. We have coffee and bagels and we start the discussion. It’s that simple,” he said.

The group has proven to be of value to many men, said Reynebeau. “You’re learning a lot. You’re sharing your ups and downs of life and you find out that the other people in the room have the same struggles,” he said. “It’s important to find out that other guys are possibly thinking exactly like you. Other guys think their faith is important but they don’t know how to expand it.”

Reynebeau said he enjoys the group’s camaraderie. “I love that everybody is on their faith journey and their growing closer to God in their own way,” he said. “It’s so easy to do, you can start with four guys. That’s what we did, it exploded.”

Almost everyone who is in the group started because of a personal invitation from another member. “Once they come it’s easy to keep coming back because it’s so friendly,” he said.

Words to live by: “My grace is sufficient for you. …” (2 Corinthians)