GREEN BAY — No construction experience necessary. Next month, the second annual Greater Green Bay Habitat for Humanity Faith Build, in partnership with Thrivent will begin, and volunteers from churches are invited to reserve dates.

“Saturday, July 13, is our first day with volunteers,” said Jennifer Maier, volunteer director. “We learned last year that doing it in the spring is hard, because we don’t know when we can start in the spring. 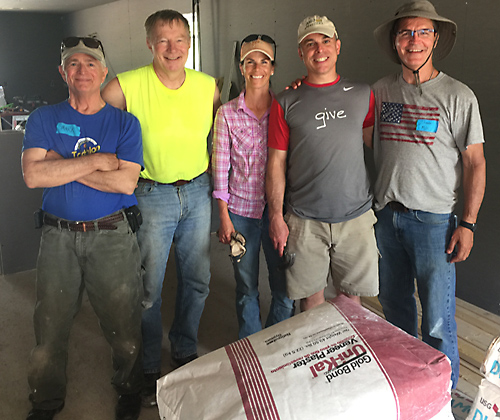 Mark Boland, left, Deacon Don Ropson, Laura Weber, Dave Weber and John MacDonald served on the volunteer team from Resurrection Parish in Allouez that worked on the 2018 Greater Green Bay Habitat for Humanity Faith Build. The 2019 Faith Build will begin in July. Parishes, churches and faith-based organizations can support the project through fund-raising and volunteers at the worksite. (Submitted Photo | For The Compass)

“Our big thing that we tell churches is just pray for our continued success and safety,” she added. “You can volunteer at the build site and fund raise in any capacity.”

Thrivent matches up to $65,000 in donations from parishes, churches and faith-based organizations for the Faith Build. The average cost of a Habitat home is $130,000.

Gary Van Handel of SS. Edward and Isidore Parish in Flintville volunteered at last year’s Faith Build on Western Avenue in Green Bay. It was his first Habitat for Humanity experience. Van Handel, a retired project manager for the Jacobs Group, became interested when a colleague mentioned his volunteer experience with the organization. The parish involvement in the Faith Build provided the perfect opportunity for Van Handel.

“I started last May with the Faith Build and I’ve worked on about eight or nine homes this last year,” he said. “I started coming every week. I enjoy it. It’s great exercise, a lot of fun, great team building and you get to meet different people. We had a small team from the parish last year. I’m hoping we get a few more this year, so I get to know more people from the parish.”

In addition to volunteers, SS. Edward and Isidore provided financial support for the Faith Build. Parish members also serve at the Habitat for Humanity ReStore in Ashwaubenon.

Resurrection Parish in Allouez contributed financially with a gift of $10,000 and volunteer hours to the 2018 Faith Build. This year, while parish funds are not available, members are still encouraged to be involved. Information is provided through bulletin announcements.

“We are offering all the things you can do to contribute, something as simple as buying a couple of 2’ x 4’s and you get to sign your name on them,” said Deacon Don Ropson. “We put a couple in the bulletin each week.”

Habitat for Humanity provides themed fund-raising ideas. Others include donating a penny per square foot of your house and buying a square foot of the Faith Build house for approximately $54. Habitat will even provide small cans of snack chips to promote donations.

“They can put their change in the can,” said Maier. “We try to make it as easy for them as possible. Some churches write a grant. You don’t have to donate a set amount of money. We want everyone to participate in whatever way that they can.”

Donors to last year’s Faith Build also included the Sisters of St. Francis of the Holy Cross and the Knights of Columbus from Nativity of Our Lord Parish in Ashwaubenon, said Maier. The youth group from Our Lady of Lourdes Parish in De Pere provided lunch at the worksite, which is another way to support the build.

“Some bring lunches all year round, not for just the Faith Build,” said Maier.

While the Faith Build structure with Thrivent was new last year, diocesan parishes have a history of involvement with Habitat for Humanity. Resurrection, for example, built a Habitat home on Smith Street in Green Bay in 2003.

“Fr. Paul Demuth was the pastor at that time,” explained Deacon Ropson. “He gathered a group of people together one night and said, ‘We are going to build a house for Habitat for Humanity, just the parish, no help from anyone else.’ At that time, I think we had to raise $75,000.”

Construction on the home began in September and was completed in November. Parish volunteers worked at the site on Wednesdays and Saturdays. Some volunteers from Ascension Lutheran Church in Green Bay assisted, but it was primarily a Resurrection Parish project.

“It was one of the best things we ever did as a parish,” said Deacon Ropson. “It brought together so many people who had never really participated other than being good parishioners and coming to church every Sunday and paying their dues. Guys would haul their tools to the jobsite, their table saws and other stuff. Those were the days when they wouldn’t let us use air nail guns. You had to pound all the nails.”

Deacon Ropson added that he has special memories of gathering for prayer at the beginning of the workday at the build site and connecting with people through lunch together. The street was blocked off on the day of the dedication to accommodate the large number of people from the parish.

“They are great examples of faith in action and really build a unity between the faith groups involved,” said Simon, a member of St. Joseph Parish in Appleton. “They also open the community to the presence of faith in building a better world.

“Habitat for Humanity of Oshkosh will be growing in faith builds in the years to come,” he added.

“My experience was what the average person has from around the home doing projects,” said Van Handel, whose wife, Brenda, is also a Habitat volunteer. “I picked things up over the year watching and learning, working under the guidance from the construction guys from Habitat.

“It’s such a good cause,” he added. “When you talk to (the homeowners) they are realizing their dream.”