APPLETON — Many people write books. But not many write a vision statement to guide their writing. Amanda Lauer of Appleton has.

“It (the vision statement) is basically ‘to write wholesome books that are going to change the world,’” Lauer told The Compass. “I want to make a difference in people’s lives.”

To that end, Lauer, a freelance writer for The Compass, has written a trilogy set during the Civil War that tells the love stories of three separate Catholic couples caught up in the War Between the States. 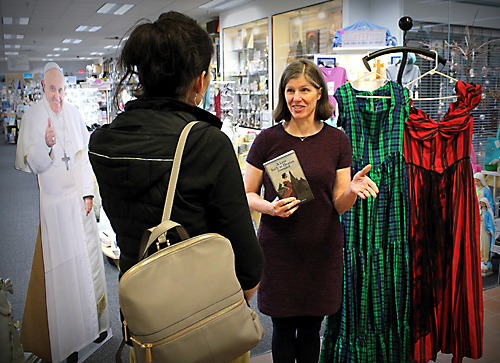 Amanda Lauer talks with Mary Kegley about her Civil War book trilogy during a book-signing event May 4 at St. Patrick’s Gifts & Books in Appleton. Dresses used on the cover for the second and third book are pictured at right. (Brad Birkholz | For The Compass)

“The three couples’ circumstances vary,” Lauer explained, “but the one thing they have in common is that the man and the woman are on opposite sides of the war. Sometimes the woman is from the South, sometimes, the North.

“The common theme,” she said, “is that they find common ground to save themselves, or to save other people. They know that people have more in common than they have differences.”

Lauer said she believes that this theme remains relevant to the world 150 years later.

“I think people are artificially trying to create division in our country,” she said. “If you look at people as a whole, we have a lot more in common than we have disparity. People all over want the same things: health, happiness, a roof over their head, to create a better life for their children. If we would focus on commonalities we have rather than our differences, it would make such a difference in this world.”

Another thing the main characters in each of the three books share is the Catholic faith. Lauer said this is because being Catholic herself — she and her husband, John, belong to Sacred Heart Parish in Appleton — colors her “perspective on life so it comes out in everything I write,” as she told the Indie Catholic Authors’ blog.

For accuracy, her editors at Full Quiver Publishing had her fact-check the books with a priest. She chose Fr. Jack Mullarkey, a senior priest of the Green Bay Diocese, for the task. She said he was able to tell her important details from the late 19th century, such as that “women didn’t sing in church” and that a hymn (“Faith of Our Fathers”) we now use at Mass “wasn’t a Catholic hymn then.”

The fact-checking paid off. Lauer earned the 2016 Catholic Arts and Letters Award (CALA) for young adult writing for her first book.

All three books have also served to introduce people to the Catholic faith.

“I have friends,” Lauer said, “who aren’t Catholic who said, ‘I love this both because it’s not preachy or pushy. It was just who they were, how they were raised.’”

This is fine with Lauer who says her writing is “my way of evangelizing and introducing people to the Catholic Church and dispelling some of the myths about the church and presenting it for the really beautiful faith that it is.”

Why she chose to set her novels during the Civil War relates to her love of history. However, she came by the specific storyline for her first novel — based on an actual person — through her work as a journalist.

She had done a feature article about an Appleton Civil War reenactor, William Syverson, who now lives in Naperville, Ill. Part of why he became a reenactor was because his great- great-granduncle, Ira Simmons, fought in the conflict.

“That was such an incredible story — so unique,” Lauer said. “I thought, ‘Someone should write a book about that experience.’ And it turned out to be me.”

Syverson shared Civil War facts with Lauer. So did others.

“Civil War people, when they read this,” she said, “will let you know if you have any fact out of place.”

All that insight was supplemented by a great deal of research.

“I always wonder how Margaret Mitchell wrote ‘Gone with the Wind’ without the internet?” Lauer said. “It’s such a great resource.”

Lauer added that the heroines in each book are based on her own three daughters’ personalities. And two of her daughters — Samantha and Stephanie — posed for cover shots on the second and third books. The dresses they wore were provided by Neenah resident Sue Kiseau, who handles costuming for local theater groups. (The photos on books two and three were also taken by Compass freelance photographer Brad Birkholz.)

All three books will become audio books this summer — with Lauer as the narrator — and also be translated into French and Spanish.

In the end, Lauer doesn’t talk about the Civil War aspects of her books as much as she speaks about the characters.

“These are three very strong women who go through a lot,” Lauer said. “Each person is really trying to be better versions of themselves, trying to be the best persons they can and make the best decisions they can, under very harrowing circumstances.”

Some of those lessons may have moved on to the next generation. While Lauer already has two other novels in the works — based on growing up in the 1970s — her 6-year-old grandson, Joseph Dokko, wants her to write something about him. When she asked what, he answered, “I want you to write a book about how I become a saint.”