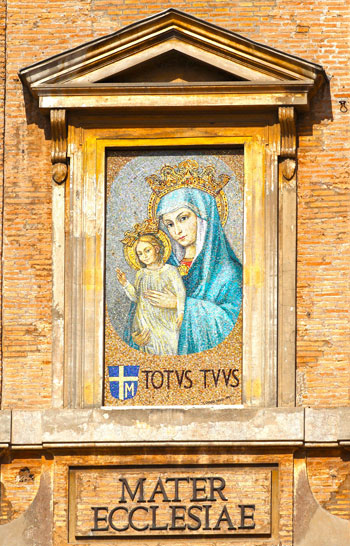 Pope St. John Paul II had this mosaic of Mary and the Christ Child placed on a wall high above St. Peter’s Square after he was shot in the square in 1981 on the feast of Our Lady of Fatima (May 13). The Mary as Mother of the Church mosaic (Mater Ecclesiae), was modeled after one in St. Peter’s Basilica and unveiled seven months after the attempt on the saint’s life. (CNS photo | Paul Haring)

However, while this is a new feast day, honoring Mary as the “Mother of the Church” goes back even before the Second Vatican Council. At that time, the title was first officially bestowed on Mary. Some of the early saints of the church — such as Ambrose (fourth century) and Leo the Great (fifth century) — also used this title for Mary.

Whether the title of “Mother of the Church” was official or not, the reality of that motherhood dates to Mary’s time at the foot of the cross of her son. In John’s Gospel, Jesus tells his disciple, “There is your mother.” And he tells Mary, “There is your son.” This has long been understood as Jesus’ commission of Mary to be the mother of all disciples and, thus, of the church.

Presence in the Upper Room

This commission became even more clear with her presence at the first Pentecost, when the disciples gathered around her in prayer in the Upper Room. The Spirit descended upon them — just as it had descended upon Mary when her holy child was conceived.

As Cardinal Robert Sarah, prefect of the Congregation for Divine Worship and the Discipline of the Sacraments said in 2018, when the Vatican approved the new feast, “As a caring guide to the emerging church, Mary had already begun her mission in the Upper Room, praying with the Apostles while awaiting the coming of the Holy Spirit.”

In the modern church, it was on Nov. 21, 1964, when Pope St. Paul VI announced his intention to end the sessions of the Second Vatican Council by bestowing on Mary the title Mater Ecclesiae, (Mother of the Church):

“Therefore, for the glory of the Virgin Mary and for our own consolation,” the pope wrote, “we proclaim the Most Blessed Mary, Mother of the Church, that is to say of all the people of God, of the faithful as well as of the pastors who call her the most loving mother. And we wish that the Mother of God should be still more honored and invoked by the entire Christian people by this most sweet title.”

It is helpful to know that, when Vatican II opened, plans were in place for the council to issue an entire document devoted to Mary. However, this soon became a topic of some contention among the attendees. Finally, they decided that Mary’s role in the church fit better within the actual document on the church: “Lumen Gentium.” (This document was promulgated on Nov. 21, 1964.)

In that document, the council explained, “This maternity of Mary in the order of grace began with the consent which she gave in faith at the Annunciation and which she sustained without wavering beneath the cross, and lasts until the eternal fulfillment of all the elect. Taken up to heaven, she did not lay aside this salvific duty, but, by her constant intercession, continued to bring us the gifts of eternal salvation. By her maternal charity, she cares for the brethren of her son who still journey on earth surrounded by dangers and cultics (sic.), until they are led into the happiness of their true home” (n. 62).

Later, and also under Pope Paul VI, the Vatican ordered a new “votive Mass” in Mary’s honor: Beata Maria Ecclesiæ Matre, or “Blessed Mary Mother of the Church.” This was added during the Jubilee Year of Reconciliation (1975). The title continues to be used as a title for several prayers in Mary’s honor.

The desire to more strongly identify Mary as the Mother of the Church increased under Pope John Paul II. After the assassination attempt on his life in St. Peter’s Square on May 13, 1981, the pope constantly said that Mary’s hand had saved him that day. He eventually decided that St. Peter’s Square — which had seen her saving action — should concretely honor Mary with this title. He therefore commissioned a mosaic, honoring her as Mother of the Church (Mater Ecclessiae). The mosaic also bears John Paul’s apostolic motto: Totus tuus (“Totally yours”).

This mosaic was eventually placed on an outside wall in the square. The spot had once been a window in the Apostolic Palace. Today, the pope can see it from the window of the apostolic apartment. (Pope Francis does not live in the Apostolic Palace, but he receives visitors there.) Pope John Paul II dedicated the mosaic from his window on Dec. 8, 1981.

This image of Mary with the Child Jesus seen in the mosaic — while a new artwork — was based on a painting in the Old St. Peter’s Basilica (also called the Constantinian Basilica) built in the fourth century. The original image is called Madonna della colonna (Madonna of the Column).

Honors to the Mother of the Church continued. In 1990, Pope John Paul II dedicated a monastery — also named Mater Ecclessiae — in Vatican City, overlooking the Vatican Gardens. This is currently the residence of Pope Emeritus Benedict XVI.