Husband, father of KC ‘Family of the Year’ recovers from brain tumor

DARBOY — This Father’s Day, the Zuleger family has a lot to be thankful for.

On June 7, Bob and Mary Zuleger celebrate their 44th wedding anniversary. Their family, consisting of four adult children and their spouses raising 12 grandchildren (lucky number 13 is on the way), was recognized as the 2019 Knights of Columbus Family of the Year for the Diocese of Green Bay for its involvement at Holy Spirit Parish in Darboy. 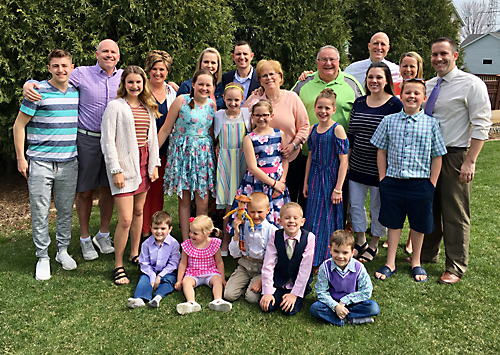 With flowers to plant, grandkids to play with and laughs to be shared, everything is exactly how the Zulegers could have imagined. However, the outlook was much different last November, when the family didn’t know if they would get to celebrate Father’s Day with the family patriarch.

Bob, 65, was born and raised in Darboy. He met Kaukauna native Mary, 64, in 1972, and the two were soon inseparable. They were married in 1975 by Bob’s brother, Fr. Don Zuleger, now pastor of St. Bernadette and Sacred Heart parishes.

Bob and Mary knew their shared faith would always keep them strong, and as they started their family, God was at the center.

“We both come from families that were extremely faith-filled,” Bob said. “My mom and dad went to church every Sunday. That’s something that carried on, and I wanted to do that with my four children.”

The Zulegers became members of St. Bernadette, where their kids, Jim, Kristy Kendall, Beth Dunphy and Mike attended school. Throughout their nearly 30 years at the parish, Mary played piano almost every weekend while Bob was a lector and member of the men’s choir.

“The Knights of Columbus is something that is near and dear to me,” Bob said.

Mary said they moved to Holy Spirit in 2013 because their entire family now belongs to the parish. Ten of their 12 grandchildren are enrolled in the school, and their son Mike is the principal.

“It was very hard to leave St. Bernadette, but when those grandkids come up and give you a hug after Mass and say, ‘Grandma!’ That’s why we did it,” Mary said. “You can’t beat that.”

By September 2018, Bob was contemplating his career and future. After 45 years in the health care industry, he decided it was time to retire. He left work for the last time Friday, Nov. 9, ready to celebrate with his family.

But the celebration would be put on hold.

A recurring tremor in his left hand led Bob to schedule an MRI for that very night. By 7 p.m., he was at the hospital with Mary, going through the test. As they left the hospital later that evening, a technician stopped them in the lobby, handing Bob a phone with a doctor on the other end.

Bob said he knew it couldn’t be good.

“The doctor came right in and said, ‘I don’t know how to tell you this. You have a massive brain tumor in your right frontal lobe,’” Bob said. “You can imagine the shock and devastation and fear that overcomes you when you hear that, and you say, ‘How can this possibly happen to me on the day I retired?’”

Luckily, there was hope. Doctors believed the tumor was a meningioma, an operable tumor that is benign 90 percent of the time.

Meanwhile, Bob’s 87-year-old mother, Dolores Zuleger, was in the hospital with a failing heart, surrounded by her children and grandchildren. Bob and Mary were also expected to attend a Christmas party that Saturday, as Mary’s sister, Karen Elrick, was suffering from pancreatic cancer and was not expected to survive until Christmas.

“We found out about the tumor on Friday, but we couldn’t tell our kids until Sunday, because Saturday we had my whole family here for Christmas,” Mary said. “We had to put on this happy, brave face.”

After a final Christmas celebration with Mary’s sister, Bob’s mother passed away that Sunday. Now it was time to share even more difficult news with the family.

“You can imagine it was emotional and devastating, but I tried to assure everybody that it was a meningioma, and they’re going to get in and get it out, and I’m going to be OK,” Bob said. “I’ve got 12 grandkids. There’s a lot to live for.”

The surgery was scheduled for Nov. 26, and as word of Bob’s condition spread, prayers and support came pouring in. The Zulegers said they believe everyone needs help in life sometimes, but they were still blown away by the love they received.

“The support system we had just helped us and lifted us up,” Bob said. “It was an unbelievable feeling.”

The family visited the National Shrine of Our Lady of Good Help the morning before surgery. As Bob and Mary kneeled before the statue of Mary in the shrine’s apparition oratory, it glowed brightly. That night, a prayer service was held for Bob at Holy Spirit, and the church was filled with friends and family.

“I kept feeling that I’m not worthy, but I’m grateful that all these people came together to help get me through this,” Bob said.

With everyone backing him, Bob went into surgery confident he was going to be OK. After 12 hours and many prayers, the surgery was finished. The tumor was benign, and Bob was going to recover.

He said he couldn’t have gotten through it without everyone’s prayers.

“I’m eternally grateful for my entire family,” Bob said. “They were able to cope with all of these things, I believe, because of our faith and how we lean on each other.”

“We are very proud of that and what we do,” Bob said. “It’s a great honor. This is not an honor for me as a Knight of Columbus. This honor is collectively for my entire family.”

As his recovery continued, Bob has gotten reengaged with the Knights of Columbus. Mary said the difficult times have brought them closer to each other and God.

“I would say I’m even more faith-filled,” Mary said. “We didn’t know what we were going to get after his surgery, and we got a better version of what he was.”

Bob said he hopes their story can help others.

“We tell the story to give others hope,” Bob said. “Everybody’s situation is different, and we hope that our circle of friends watched what we went through, and if they ever need help like this, we’ll be there to help them like they helped us.”