CHAMPION — In 10 years, Biking for Babies has grown from the humble beginning of two guys who cycled across the state of Illinois to four national teams in visible bright yellow jerseys that “cover the pavement in prayer,” explained Nikki Biese, executive director. The mission of the apostolate is to raise awareness and support for centers that help women in crisis pregnancies. 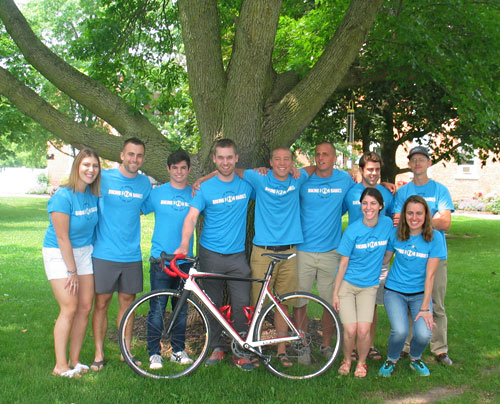 Biese spoke at the northern route kickoff event on July 7 at the National Shrine of Our Lady of Good Help. In 2011, Kevin Biese, Nikki’s husband, became the first cyclist from northeast Wisconsin to join Biking for Babies. When preparing for his second ride in 2012, Kevin, a Kaukauna native who now serves as director of health and wellness for the organization, shared in an interview with The Compass that he hoped that one day a team, rather than just an individual or a couple of individuals, from the Green Bay Diocese would participate in the annual trek. That day arrived.

On July 8, a group of northern missionaries departed from Green Bay for St. Louis, where on July 13, they met up with three other Biking for Babies teams at the “Celebration of Life.” Eleven team members — eight cyclists and three support crew — formed the northern team, including six from northeast Wisconsin and two others with ties to the area as students at St. Norbert College in De Pere.

Nick Vande Hey of Appleton, a senior at St. Norbert College who participated in the 2018 ride after being invited by Kevin, recruited most of the 2019 team.

“It was easier than expected,” said Vande Hey at the kickoff event. “I think the Spirit just moved. I just said, ‘Hey, what do you think about this?’ David (Schmitt) said right away, ‘I will do it.’ I think that abortion is something that’s on a lot of young people’s hearts. Even if they aren’t actually doing something about it, they are at least thinking about it.”

“(Vande Hey) talked about Biking for Babies. I knew about it from a distance. My cousin, Sarah Voet, did it a couple years ago,” said Reynebeau, a 2018 graduate of the University of Wisconsin-Madison who works in De Pere. “I never thought I would get involved in it. Nick talked about how it impacted his faith and grew his awareness. I went home and thought, ‘That’s really inspiring.’”

Reynebeau added that he was also motivated to participate in Biking for Babies because of the views on abortion of some of his friends from college.

“I felt very alone in my pro-life views,” he said. “I was thinking about getting involved in some way in the pro-life effort in addition to praying. I wasn’t doing anything tangible and then I heard about Nick and his testimony. I hope to change people’s hearts. There are a lot of people I know, they are my friends, but have very different views on the sanctity of life. Hopefully, I can help open their hearts and rethink their views.”

Katie Wanek, a member of Holy Trinity Mission Parish, New Denmark, served this year on the support crew, which traveled by van to assist the cyclists along the way. She knew Nikki and Nick from Colorado Leadership Retreats.

“I’ve always been pro-life, but I’ve never done something so active like this other than a march or protest,” said Wanek, a 2019 graduate of the University of Wisconsin-Green Bay. “Nikki asked me, ‘Have you ever thought about doing this?’ I said that ‘I will pray about it.’ A few weeks later, I was signed up.”

Wanek’s goal for the experience was to “encounter Christ in a different way,” she said.

“Obviously, in the pro-life movement, the most important thing is love,” she said. “I think our culture is devoid. There is no love, just a lot of fighting and battles. If we can show people, especially the women who are in these situations, that they are loved no matter their situation, I think we can make a difference.”

Aubrie Faust, a student at St. Norbert, and Ben Magnin, Vande Hey’s friend, classmate and football teammate from their days at Xavier High School in Appleton, also served on the support crew.

Following Mass at the Shrine, Dr. Robin Goldsmith, medical director of the St. Gianna Clinic in Green Bay, spoke about support for the clinic by Biking for Babies. She praised the apostolate for raising $500,000 since it started in 2009. Dr. Goldsmith also explained the positive effect women’s centers and mobile units have in the fight against abortion.

“When a woman sees an ultrasound, she knows in her heart that’s a child’s life and they can no longer sacrifice it by going through with an abortion,” she said.

“People were way more generous than I anticipated,” he said. “People have been very supportive.”

The ride was the first long distance cycling event for Mannebach, who plays golf for the Green Knights. The route to St. Louis covered more than 600 miles in six days.

“I think it will be all mental,” he said in advance at the kickoff event. “I’m excited about the physical challenge. It seems like we have a nice group of people.”

Vande Hey was active in recruiting without knowing for sure if he would return this year. He spent the spring semester abroad in Ireland. His bike was on the other side of the ocean and he didn’t know how he was going to fundraise.

“The Spirit kept putting it on my heart as the new laws were passed and new statistics came out,” he said. “It ate at me. Someone has to do something. Someone has to step up.

To provide support or for more information about Biking for Babies, visit bikingforbabies.com.