APPLETON — One of the most rewarding aspects of Catholic evangelization is opening the door for someone to have a personal relationship with God. While this is typically done in the figurative sense, Al Laux of St. Thomas More Parish in Appleton has literally been opening doors for two decades. 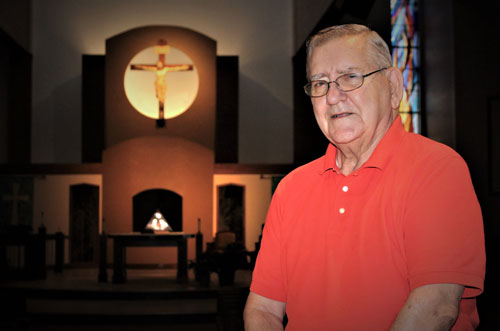 Your Catholic Neighbor: Al Laux (Brad Birkholz | For The Compass)

The 81-year-old Appleton native has been a member of St. Thomas More for 50 years, and for the last 20 of those years he has been arriving at the church every weekday morning to open it up for daily Mass. Fortunately, he doesn’t mind rising before the sun for most of the year. “I don’t have to get there that early, but I get there at 5:30 a.m. I could get there at six and be just fine. The Mass starts at seven,” said Laux.

Laux is a kindred spirit with the mail carriers of the U.S. Postal Service, as neither snow nor rain nor heat, etc., prevents the church from being opened. “I opened the church for 20 years. That means five days a week — no matter what the weather was, doors were opened and we had a Mass,” he said.

Over his time as a member of the parish, Laux and his wife Rita have served in almost every volunteer position available. The list includes: serving on the parish pastoral council and finance committee, running the parish picnic, and even cleaning and painting the facilities. While this made for a busy life, Laux has been happy to help. “It was always a pleasure and it was something that needed to be done, so I did it,” he said.

Clearly, Laux is no stranger to stepping up when there’s a need for volunteers. In fact, it was this willingness to help out that got him started opening the church after he retired from his 40-plus-year career as a welder with American Can.

“In ’99 I retired and the guys who were doing it said, ‘Well we need somebody to take our place when we go on vacation.’ So, I said, ‘Oh I can do that,’ and all of a sudden, I was doing it all the time. They said, ‘Well, we’re getting old so we’re going to quit doing it and just let you do it.’ That was fine with me,” recalled Laux.

While the main job has been unlocking the church doors, there is a lot more that goes into the role, said Laux. “I have to get everything ready for the Mass. Put the hosts out and put the wine and the water out. Then we have a morning prayer, an offertory prayer. We use books for that, so I open the pages and mark them for everybody. We have about eight people who say the morning prayer. Before that, if the candles by the tabernacle aren’t lit, then I have to climb up there and light the candles,” said Laux.

For someone who regularly is waking up around the same time as the birds start singing, it’s not too surprising that Laux’s favorite saint is Francis of Assisi. In fact, Laux had an experience at his former church that paid homage to the saint’s reputation as a friend to all animals. “I belonged to St. Joe’s and I ushered. There was a robin flying around in the church and the church was packed. A voice said, ‘Al, stand up and stick your hand out. The robin will land on it, then take it out so it won’t disturb the Mass,’” he said.

“I looked around at all these people in there and thought, ‘I’m not going to do that.’ I didn’t do it. The next time I ushered it was five o’clock in the morning and a robin was just flying around again. And then this voice, ‘Well now Al, stand up and do that.’ I stood up and a robin landed on my hand and I took it outside,” recalled Laux. “These two ladies that said the morning prayer walked home with me said, ‘Oh, St. Francis, huh?’ I said, ‘Yeah, St. Francis, right. I was walking home and I was praising God and a bird pooped on my head.’ I said, ‘I bet you that never happened to St. Francis.’”

After 20 years of opening doors, Laux is ready to hang up the keys and give his body a bit of a break. Although, based on his life’s motto, there’s a strong possibility that his volunteer days won’t be behind him completely.

“If there’s something to be done and nobody was doing it I would do it. Somebody had to do it so if somebody wasn’t volunteering, I volunteered,” he said.

Words to live by: “If there’s something to be done and nobody was doing it, I would do it.”