ANTIGO — Tom McGrath has peered into the dark side of people’s lives and helped them experience the light of redemption. 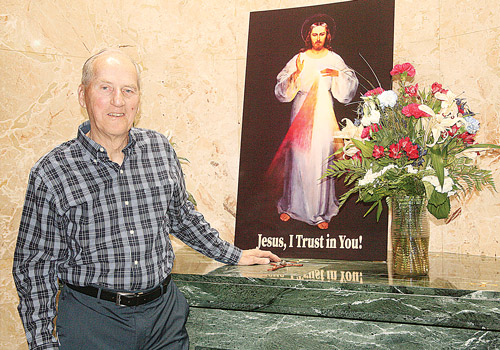 Your Catholic Neighbor: Tom McGrath (Lisa Haefs | For The Compass)

McGrath spent decades as a clinical mental health counselor, dealing with everything from teenage angst to the most heinous of incarcerated sex abusers. It was a career that could cause a person to question God’s message and mission, but he saw it differently.

“It has enhanced my belief in God,” he said. “The light is always going to come through that darkness.”

A native of Chicago, McGrath grew up in a devout Catholic family. His mother attended daily Mass, often bringing “little Tommy” along. His father, a stockbroker on LaSalle Street in Chicago, also participated in church activities.

While attending college, McGrath felt called to a mission and traveled to British Columbia in far western Canada. He came under the guidance of Bishop Fergus O’Grady, known as the “wilderness bishop” for his work bringing Catholic education to the vast province.

Bishop O’Grady recruited McGrath as a fifth and sixth grade teacher, a position the young man held for just over a year, before returning to the United States and graduating from Saint Mary’s University of Minnesota in Winona, Minn.

McGrath taught at his alma mater, St. Patrick High School in Chicago, for three years before returning to British Columbia, where he met his wife, Joyce. They were married in June 1966.

“I was always an active Christian but after meeting my wife, I had a true conversion,” he said. “She is amazing. She continues to inspire my faith journey.”

They now have two sons, two daughters and seven grandchildren.

The young couple settled in Antigo, where McGrath taught and eventually earned a master’s degree in clinical counseling. His work included developing programs for counseling adolescents in the school setting and helping thousands of teens and families deal with problems from the mundane to deadly serious.

After retiring in 2001, he was recruited to Sand Ridge Secure Treatment Center in Mauston, which houses the state’s sexually violent persons program.

“That was the most satisfying academic and scientific experience I ever had,” he said. “The goal was to understand their humanity. These guys, as bad as they were, were little boys at one time. It never justified what they did but it often helped explain what led them to commit such horrible crimes.”

In counseling, he studied Rogerian psychotherapy, a person-centered approach which focuses on listening intensely and allowing people to find the solution to their problems within themselves in a supportive environment.

He said its listening and problem-solving approach is similar to Koinonia, a retreat experience offered by the Diocese of Green Bay. Taken from an early Greek word meaning community, the Koinonia mission is to move people closer to the Lord.

Along with his wife, McGrath has participated as a director and team member in over a dozen Koinonia retreats, describing them as “powerful and deeply spiritual, with inspiring stories, beautiful music, Scripture readings, uplifting services and warm fellowship.”

McGrath has also served as grand master and treasurer of Knights of Columbus Council 1002 in Antigo, one of the oldest in the diocese. He recently became district deputy for the region. In addition, he remains active at St. John Parish as rector and commentator, distributing Communion at Mass and at Aspirus Langlade Hospital.

He retains a deep affinity for the Divine Mercy portrait of Jesus located in the sanctuary of St. John Church and often recites the Divine Mercy Chaplet during his early morning water exercises at Antigo’s aquatic center.

Unlike some people of science, McGrath has never had difficulty reconciling the research-based methods of understanding and treating human conditions with the spiritual.

“There is a higher being behind all the scientific research,” he said. “In my counseling, I become the person who identifies what that higher being already knows. My role as a therapist is to allow them that peacefulness that comes from talking deeply with someone who they trust deeply. As a good listener I am going to allow you to open your heart. The solution to your problems is within you.”

Throughout his life, he said, he has tried to allow God to work through him.

“I can take people from where they are spiritually and allow them to grow. That is so  exciting and so positive,” he said. “In the darkness, there is always light.”

Words to live by: “Focusing on the positive is so much more fun than the negative.”