GREEN BAY – The Brown County Refugee Task Force, made up of numerous Green Bay area agencies that serve the refugee community, sponsored a World Refugee Day celebration June 20 at Kennedy Park, on the city’s northeast side. Among the organizations sponsoring the event was Catholic Charities of the Diocese of Green Bay. 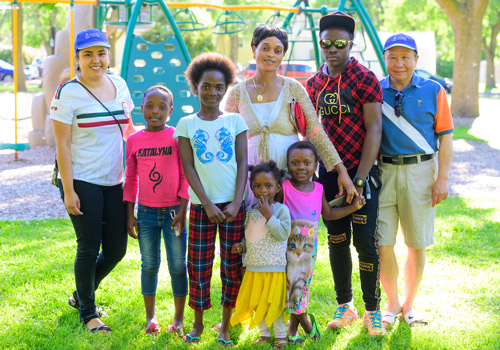 Ana Rodriguez, far left, and So Thao, far right, Catholic Charities of Green Bay staff members, pose for a photo with Andjelani Welongo and her family, who arrived in Green Bay last February from the Democratic Republic of the Congo. Catholic Charities was one of several groups to sponsor a World Refugee Day event at Kennedy Park in Green Bay June 20. The event included pick-up soccer games, international music, international foods and information about local refugee communities. (Sam Lucero | The Compass)

According to the United Nations High Commissioner for Refugees (HNHCR), World Refugee Day was first celebrated in 2001 to commemorate the 50th anniversary of the 1951 Convention Relating to the Status of Refugees. “World Refugee Day is a key moment in time to communicate with the world about who refugees are and why they require protection,” according to USA for UNHCR.

The gathering at Kennedy Park, which included pick-up soccer games, international music and food, as well as an information table about local refugee communities, was the first public celebration of World Refugee Day in Green Bay, according to Peter Weiss, living justice advocate for Catholic Charities.

“I see (the observance) as kind of a twofold function,” Weiss told The Compass. “One is to help people from the refugee community to know that they are welcomed here. We do value you as members of this community and we want you to feel connected. The other part of it is, for people in the broader community, to encourage them to get out and meet their neighbors, to interact with people who may look different or talk different, but to really encourage them.”

Green Bay Mayor Eric Genrich was one of the guests attending the event.

Genrich told The Compass that the celebration helps refugees recognize that the city embraces them.

“I think it’s really essential for me as mayor of this community to make it clear that everybody is welcome here … and really, this is the story of America, right?” said Genrich. “We all came from somewhere else, aside from our Native American friends. We all come from a different country and for many similar reasons.

“In talking to some of the folks here today, just the gratitude you can feel from them because of the opportunities they have here, the safety that they feel here, in comparison to their experiences, for example, back in Somalia. It’s really night and day,” added Genrich. “So it’s just up to us to embrace people who are new to this country and just make it clear that this is a welcoming, inclusive community. If you’re interested in doing good in Green Bay, you’re welcome and it should be celebrated.”

Catholic Charities staff members, Ana Rodriguez and So Thao, attended the event and welcomed one of their client families, Andjelani Welongo and her five children to Kennedy Park. The Welongo family arrived in Green Bay last February from the Democratic Republic of the Congo.

Rodriguez said it is important to celebrate and embrace refugees “for them to feel welcomed into the community.”

“Oftentimes, I think they are isolated. They are new to America and they don’t know where the nearest park is or other community (services), so I think it’s extremely important to build those connections with people, to get to know people in the community,” said Rodriguez.

Robyn Hallet, Literacy Green Bay executive director and member of St. Willebrord Parish in Green Bay, said that it is important for the community to help refugees feel valued and welcomed.

“Refugees generally undergo many stresses and trials before being resettled and they deserve to be treated with dignity and respect,” said Hallet. “They bring a lot of values, such as perseverance and courage, which the mainstream community could learn from.”

Diana Delbecchi, co-founder of United ReSisters of Green Bay, a group established in 2017 to support young Somali refugee women, especially through education and community building, attended the event with members of the group. Twelve members of United ReSisters recently wrote a book that shared their stories of resettlement, according to Delbecchi.

“I’m really proud that this is the first event we are kicking off” for World Refugee Day, said Delbecchi. “I think it’s really important to recognize the variety of refugees that our community actually hosts and are part of our community.

“We have a growing refugee population and we have people here who have refugee backgrounds who came here years and years ago that really  have never gotten a chance to come together and be celebrated. I think it’s a really positive event, a great day to celebrate the coming of community,” she added.