SHAWANO — Tucked into a semi-rural section of the City of Shawano, John and Betty Kadlec’s home comes with a view of woodlands and prairie that fox and deer run across.

And grass. Lots of grass. 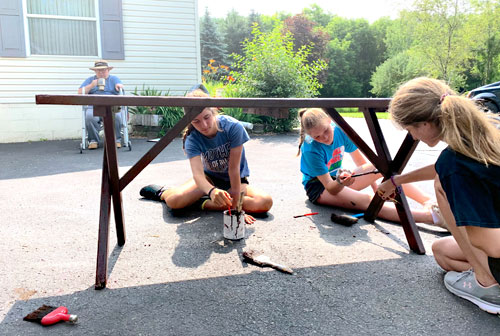 On a summery Monday, John, 79, never moved from a seat on his patio as a team of young people from the “Love Begins Here” program repainted a picnic table and their chaperone, Marny Clark, wheeled around the property on a green and gold John Deere, mowing that expanse of grass.

For some 40 years before retiring, Kadlec was the nursing home administrator of the Shawano Convalescent Center — now named Manor Care — and happy to do his own lawn mowing. Now, he quipped, “I’m too smart for that!”

“The outside work and the inside work is too much for us,” explained his wife, Betty, a retired registered nurse. “I’d like to have gotten to the weeds in the flower bed there, but I just can’t keep up with it.”

Lending a hand at the Kadlec home and at sites across the Shawano/Clintonville area were some 40 teens, mostly middle-schoolers, as part of Love Begins Here, the three-year-old summer youth service ministry of the Green Bay Diocese.

Modeled after a program that originated in the Diocese of Madison, Love Begins Here challenges middle school and high school youth to three days of prayer and service. This summer, 270 teens accepted the challenge to become Love Begins Here missionaries, spreading from bases at five different parish sites to help senior citizens and others by doing whatever jobs they might need around their homes.

“The idea behind Love Begins Here is to do service work in the model of St. Mother Teresa and her Missionaries of Charity,” explained Lynn Terrien, the program coordinator, “doing small acts of kindness with great love.”

Young people typically sign up for the program through their parishes, Terrien said. Homeowners receiving assistance fill out a work order with their own parishes. Young adults serve as leadership core team members, and adults volunteer as chaperones. 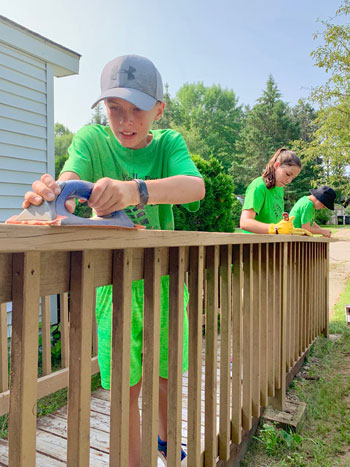 Bryce Starr, left, from Corpus Christi Parish in Sturgeon Bay, puts some muscle into sanding the handrail at the front entrance to the home of Bernie Luszczek in Shawano. Starr was part of the “Love Begins Here” crew with Stephanie Felhofer, center, Cash Nellis, right, and Jordyn Welch (not pictured), who refinished the handrail and trimmed the shrubbery around the home, tasks Luszczek said she is no longer able to do herself. (Bob Zyskowski | For The Compass)

Clark, from St. Nicholas Parish in Freedom, shut down the John Deere in the Kadlec’s yard long enough to explain why she volunteered to chaperone the Love Begins Here youth. “I just want to show love to others, and let kids I’m here with experience that love and grow in their faith,” she said.

Callie Kowalski, the diocesan Child and Youth Faith Formation assistant director, thinks it’s the reach Love Begins Here has that she likes the most.

Terrien said she likes that the youth workers are called “missionaries,” giving of their time and effort. “I always tell the kids, it’s about the work, but it’s not about the work. It’s about meeting people, visiting with them, forming a connection with them.”

As teams returned to Sacred Heart from painting, lugging boxes, pulling weeds, trimming shrubs and other jobs at homes in Marion, Bear Creek and Shawano, as well as the parish house in Cecil, the buzz was that the folks who were having work done kept inviting the young workers into their homes to sit and talk. The workers seemed as happy to accomplish the tasks as did those benefitting from their work.

“Awesome” was how Akyrie Onesti, a 12-year-old from Sacred Heart, described the experience.

She painted, did some landscaping and gardening, and helped sort through and organize boxes.

“Everything we did, everybody seemed to enjoy,” she said, “and the people we worked for always had a smile on their faces when we were done.”

Stephanie Felhofer, 13, from St. Joseph Parish in Sturgeon Bay, was part of a team that trimmed overgrown bushes, and scraped old paint, sanded and painted handrails that led to Bernie Luszczek’s front door in Shawano. None of the group from Sturgeon Bay parishes that included Cash Nellis (Holy Name of Mary) and Bryce Starr and Jordyn Welch (both of Corpus Christi) had ever done work like that before.

“I want to see the impact I can have on other people,” Stephanie said. “Even if it doesn’t seem that big, it means a lot to the people we’re working for.”

Luszczek, making her way around her home with the help of a walker, agreed. “I think it’s wonderful. All the kids, they’re so nice,” she said.

When Norbertine Fr. Brad Vanden Branden presided at Mass for the group at Sacred Heart in Shawano July 8, the prior of St. Norbert Abbey in De Pere had one message for the teams as they headed out for their first day of work. “Love the people for whom you are doing service,” he said. “Try to see them as Jesus did.”

Prayer before going out into the field is a regular part  of Love Begins Here.

“It was cool that we had Mass every day,” Akyrie said. “It’s nice because growing closer to God is more important than sitting at home or playing video games.”

As the young missionaries packed their sleeping bags after sleeping on classroom floors for three days, chaperone Tonya Branstrom declared it a good week. “I feel like they accomplished a lot,” said the coordinator of children’s ministry at St. Rose, Clintonville, and St. Mary, Bear Creek.