KEWAUNEE — During pre-game festivities at Lambeau Field for the 2016 Bishop’s Charities Game, former Packers quarterback Brett Huntley paced as he waited to receive the MVP award for his performance in the 2015 game. Huntley, the starting signal caller that evening, appeared eager to join his teammates in the locker room for final preparations, but he came to a pause when he received his award from Bishop David Ricken. Huntley broke out a smile as he looked closely at the full-size wooden football in his hands.

The reaction to the wooden footballs by Packers game MVP recipients has been similar since the first full-size version was presented in 2010 to Aaron Rodgers. A separate base featuring a metal plate with the player’s name and the honor accompanies the trophy football for display purposes.

The footballs are crafted by Svoboda Industries, Inc., in Kewaunee for Rawhide Boys Ranch in New London, where laser and finishing work is completed before they are sent to the Diocese of Green Bay.

Mike Bloniarz, owner and CEO lead at Svoboda, said that the company started making wooden footballs in the late 1980s or early ’90s. Svoboda, which specializes in custom wood products, makes footballs for teams at various levels from high school to college to the NFL. A recent NFL Alumni order was shipped to the Washington Redskins.

Small wooden footballs permanently attached to a base, crafted by Svoboda, were presented to Bishop’s Charities Game MVPs from 1996 to 2009. Plaques were awarded in the previous years.

Four pieces of 16 quarter Honduran mahogany are glued together to create the full-size footballs, which match the style of an NFL Wilson ball, explained Bloniarz.

“We clip the ends off and sand the ends of the ball,” he said. “We drill the holes for the laces and put the seams on it. The seams match the seams of the ball. Wood constantly moves, so there are a few secrets to keep the seam stable. We seal the wood and seal sand it, lace them out and they are good to go.

“The boys at Rawhide spend a lot of time and effort making them as pretty as can be, which is great,” he added. “I appreciate that. It complements our work here.”

“We call it value engineering,” said Bloniarz. “Somebody has a concept and anybody can make one of those. But how do you make a number of those? How can we help with the design? How do we make it efficient?”

The variety of wood products made by Svoboda includes cutting boards, cigar boxes, knife display cases, golf ball boxes, tape dispensers, drill bit cases, fly (fishing) boxes, clock frames, turkey calls, and pen and pencil holders. Bloniarz displays a box in his office that the company made for the 2002 Olympics. The boxes, made of cherrywood, held ticket venue materials for the athletes.

“We get wood from all over the world. We are very fortunate in the Midwest to have a good supply of oaks, ashes and maples,” said Bloniarz, who has been with the Svoboda for 31 years. “We ship all over the United States from east coast to west coast. The next order is a phone call away. The best advertising is still word of mouth. We’ve been around for 136 years. I’m pretty proud of that.” 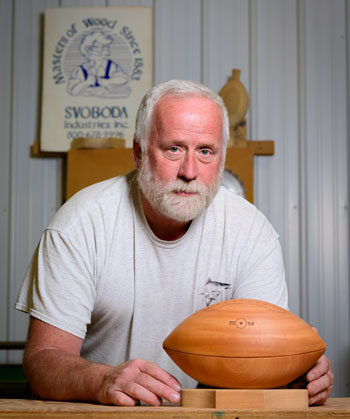 The story that Bloniarz has been told is that in 1883, Joseph Svoboda Sr. decided to start the company between Kewaunee and Chicago. He liked Kewaunee better.

“He had wood carvers that did some magnificent, beautiful church furniture — pews, lecterns — just gorgeous handcrafted carvings,” explained Bloniarz. “They didn’t have the autocraft programs. That was all handcraftsmanship. The last of the Svoboda family here was Dick Kohrt. He retired six months after I came on with the company as a CNC programmer, writing programs for the computer router.”

Svoboda Industries, which has two employees in addition to Bloniarz, relocated to a new 9,600-square foot building, next door to the previous shop, in 2010. One of Kohrt’s last product wishes was a full-size wooden soccer ball, which is displayed in the office.

“It’s 33 pieces of maple and walnut, hexagons and pentagons, to create a regulation size number 7 soccer ball that’s hollow inside,” said Bloniarz. “The sports stuff is always neat. It brings out the kid in you.”