Kaiser says both have filled her life with joy and meaning

ALLOUEZ — Brigitta Kaiser is off on the adventure of a lifetime. On July 26, she boarded a plane in Chicago bound for Ikusaka, Japan, and a one-year commitment with the Japan Exchange and Teaching (JET) Program.

Founded in 1987, JET has sent more than 66,000 participants from around the globe (including nearly 34,000 Americans) to work in schools, boards of education and government offices throughout Japan. 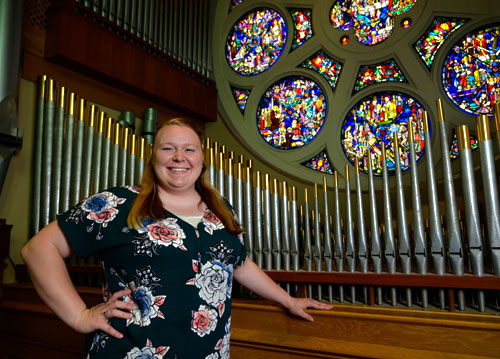 “Part of it was financial reasons and part of it was doing something different,” said Kaiser of her decision to join JET. She graduated in May 2019 from UW-Green Bay with majors in history and French, and minors in German and education. She will be an English language assistant in a junior high and one day a week at an elementary school in a community of 2,000 people about three hours from Tokyo. Participants can renew with JET for up to five years.

The one thing Kaiser isn’t afraid of is adventure, from her travels during college that included Germany, France and Scotland, to her decision to come to Green Bay to attend college. “Now I’m learning Japanese, which is a whole other boat,” she said with a smile as she prepared to leave on her assignment.

One of the things she appreciates most about traveling is “understanding other people’s point of view” and accepting those differences.

Her hometown parish is St. John the Baptist in Marshfield. Her family moved to Wisconsin when she was 8 years old from the Kansas City area in Kansas. She and her three sisters attended Catholic school, pre-K through high school. The idea of attending a public university intrigued her because she had never experienced an education at a public school.

“I never heard of the university (UW-Green Bay) before my junior year of school,” she recalled, visiting during spring break. “I just really liked the university because it’s small, it’s beautiful,” said Kaiser, who paid for her own way through college, including her travels overseas.

“I’ve had a job since fifth grade,” a paper route she had through her sophomore year, she said. “I’m so grateful to my parents for teaching me that responsibility and self-sufficiency.”

Their message, she recalled, was, “‘You’re not always going to have the money to do what you want,’” so at a young age, she said she learned to manage her money.

“I’ve been able to do the things I want because I had that base,” she said.

She is also grateful for the Catholic faith, which was nurtured by her parents, Andrea and Bernard Kaiser, who now live in Wichita, Kan., to be closer to grandchildren.

“I love being Catholic, I enjoy the community of it,” said Kaiser. When life is hectic, “It’s always been a source of balance,” she added.

In September 2017 she made the decision to live at Nazareth House, located on the St. Matthew Church grounds in Allouez. Friends lived there and she decided “it would be kind of cool to live in community with other Catholic women.”

“Church has (always) been that little bit of a safe haven,” continued Kaiser, and though she was involved with the Newman Club at UW-Green Bay, it was St. Francis Xavier Cathedral she turned to as a freshman.

She quickly joined the Cathedral Choir and was also a cantor.

“I love singing and, for me, I really get into a Mass through singing. It helps me get more focused on the Mass,” said Kaiser, pointing out that St. Augustine said that singing is like praying twice.

A graduate of Columbus Catholic High School in Marshfield, she was active in theater and music. She also participated twice in Marshfield’s interdenominational Palm Sunday Chorus.

“Music and church has just been in my blood,” Kaiser said, adding she wouldn’t think about missing weekend Mass. “That’s one thing (finding a Catholic church or a faith group) that I worry about in Japan,” she said.

Kaiser offers some suggestions to parents who are sending their kids off to college and want to help them stay connected to their Catholic faith. “Finding those like-minded people is really important,” said Kaiser. When you visit a college, help them “to connect to the Newman Center at the university.”

In addition, she suggests, “Find a way to connect with something fun that has to do with your faith.”

Kaiser said she got the “travel bug” from her father, who retired from the Kansas Air National Guard after 20 years of service and has been a cross-country trucker. “‘Why don’t you come on an adventure with me?’” she recalled her Dad asking her when she was younger. That’s when they drove through the mountains to Seattle.

After graduating from high school in 2014, Kaiser traveled with the Wisconsin Ambassadors of Music to seven countries in 16 days. “We performed in every country,” she said. “We sang in this church, and the acoustics,” she reminisced with a sigh, and, she continued, it was all about “connecting with God in his house.”

Words to live by: “Be the change that you wish to see in the world.” — Mahatma Gandhi