BEAR CREEK — Food, music and games are all essentials for a successful parish festival. At St. Mary Parish, another ingredient is the smell and taste of sauerkraut.

Since 1965, this farming community has been home to St. Mary’s Sauerkraut Festival. It’s become more than a parish fundraiser, say organizers and volunteers. It’s a gathering of life-long friends. 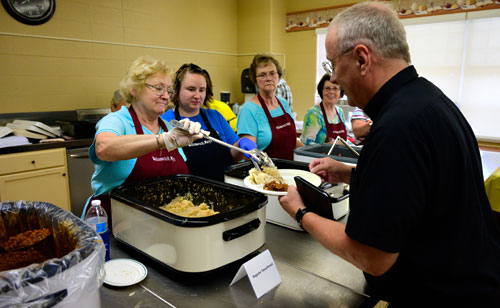 “I just like the hometown feeling. Everybody from my childhood comes home,” said Barb Havnen, chairperson of the 55th annual sauerkraut festival, held Aug. 3 and 4. “Our little community comes together, whether they are part of our parish or not. We’ve got a lot of non-parish members up here helping. The community all pitches in and makes it a good day.”

Bear Creek is home to GLK Foods, the world’s largest producer of sauerkraut. According to GLK, it processes around 130,000 tons of cabbage a year. Sauerkraut (German for “sour cabbage”) is made by pickling finely shredded cabbage.

Norbertine Fr. Tim Shillcox, who was appointed pastor of St. Mary (along with St. Rose in Clintonville) in July, said the festival is “unlike anything I’ve ever been at” in previous parish assignments.

“They are tapping into their local heritage and they are so proud” of being home to the largest sauerkraut producer, he said. “The church is 150 years old. The village is only 450 people and this is their big fundraiser. I think last year they cleared $20,000 and they just seem to have a lot of fun doing it.” 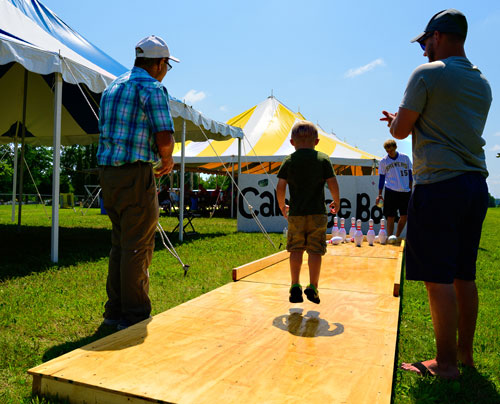 Sawyer Ziebell, 4, jumps up and down in excitement as he reacts to knocking down bowling pins during cabbage bowling at the St. Mary’s Sauerkraut Festival Aug. 4 in Bear Creek. His father, Matt, is pictured below at right. (Sam Lucero | The Compass)

Green Bay Auxiliary Bishop John Grellinger (1899-1984) seemingly had a lot of fun founding the festival just 10 weeks after being named pastor on June 18, 1965. According to “In His Vineyard 1968 to 1983: A Series of Life Sketches of the Bishops, Priests and Permanent Deacons of the Green Bay Diocese,” Bishop Grellinger started the festival as a way to pay for construction of a new school that was built in 1960 and renovation of a convent.

“Capitalizing on an area resource (‘cabbage is king’), he initiated the annual Bear Creek ‘Kraut festival’ and saw the debt disappear,” it said.

Bishop Grellinger convinced one of his parishioners, State Sen. Gerald Lorge, to introduce a resolution recognizing Aug. 29, 1965, as “the first annual Sauerkraut Festival at Bear Creek.”

The resolution included a snapshot of cabbage history in Bear Creek, noting that “two entreprenuring Irishmen, Dave and Henry Flanagan, in 1917 founded in their name, at Bear Creek in the Embarrass and Wolf River Basin of Outagamie County, an establishment for the manufacture of the German specialty, sauerkraut, which has become and continues to be the citadel of one of the most flourishing industries of its kind in the nation.”

“(GLK) actually started as a pickling company, processing pickles, with some cabbage on the side,” he said in 2012. “One year the cabbage market was inundated, so they decided they were going to turn it into sauerkraut. It wasn’t some great master plan, it just kind of evolved.”

Parishioner Bill Klegin was 20 when the first festival was held. He’s volunteered at all 55 festivals and is one of its historians.

“Bishop Grellinger took over as pastor and he thought we could use a little extra funding to support our Catholic school,” said Klegin. The bishop contacted parishioner Dave Flanagan Sr. who had retired as president of GLK Foods (then Great Lakes Kraut Co.) “He went over and told (Flanagan) his plan. He thought it was an excellent idea and wrote him a check for $1,000 to start the festival. At that time, that was quite a donation.”

“At one time, they claimed we had 3,000 people who came to our festival,” said Lorraine Bricco, who has also attended all 55 festivals and served as co-chair of the 1968 festival with her late husband, Loy.

GLK continues to support the parish festival. This year the company donated $5,000 to help pay for expenses such as a band that performed Saturday night and prizes for children’s games. 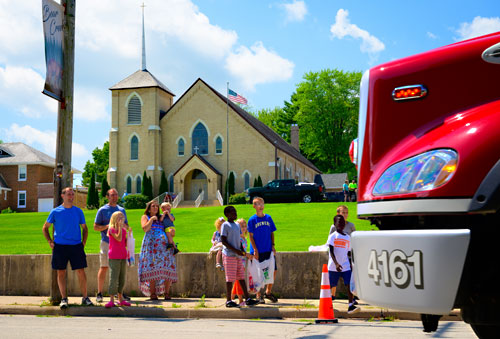 A fire truck rolls past spectators in front of St. Mary Church in Bear Creek during a parade Aug. 4. (Sam Lucero | The Compass)

The sauerkraut festival has evolved over the years. For example, it began as a one-day event, expanded to three days, and this year was held on Saturday and Sunday.

“We used to have a sauerkraut queen,” said Sue Mares, who co-chairs the festival finance committee, along with Bob Norder and Joan Lehman. “Bishop Grellinger had the students from St. Mary School perform German songs while the meal was being served for the guests, which my sister and I were part of. He had our mothers makes us little German vests and skirts, as I remember.”

Over the years, raffles, auctions, car shows, cabbage bowling, a parade and live music were added to the festival. The “famous sauerkraut festival dinner,” served Aug. 4 in the church hall, is still the main draw. Among the items served this year were hot dogs topped with seasoned or regular kraut, sauerkraut hot dish, kraut salad and kraut cupcakes.

St. Mary’s Sauerkraut Festival isn’t the only such event in the country, but it is the oldest. The Phelps, N.Y., Chamber of Commerce began the Phelps Sauerkraut Festival (held this year Aug. 1-4) in 1967. Today its main sponsor is GLK Foods, the same company that supports the Bear Creek parish festival.

Many of the veteran volunteers look to the next generation to continue what Bishop Grellinger started in 1965. “We’re trying to pass it on to the younger kids, because we are not getting any younger,” said Klegin. “I am 75 years old. As we get older, we start taking (volunteer positions) where we can sit more, you know. We can’t run with the young folks anymore.”