ALLOUEZ – A good deed’s impact may never be known, but Karen Schramel of Woodstock, Ill., was determined to make known the “miracle of the Lord” she received in the form of a pocket cross.

Schramel contacted The Compass via email to share her good-deed story that took place while having blood work at Mercy Health in Woodstock on Sept. 3. 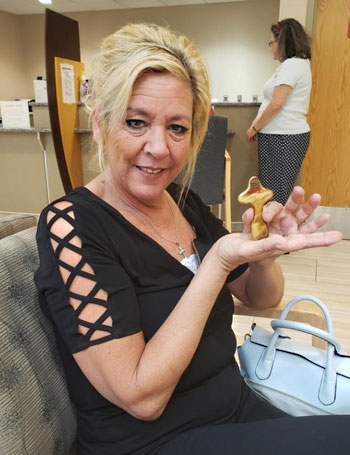 Karen Schramel holds the pocket cross given to her while waiting for a medical appointment. (Submitted photo)

“I was sitting at the doctor’s office and this older man walked by me and said he really liked my crucifix I was wearing,” Schramel wrote. “He walked past me again and I noticed his crucifix. I said, ‘Why I really like your crucifix. It’s beautiful.’ The next thing I know, he was handing me this wooden cross.”

The cross she received was made by Dan Czekala of Manitowoc, who was featured as a Catholic Neighbor in September 2018. Czekala told The Compass that he has made more than 200 pocket crosses in his basement workshop. They are blessed by a priest and he passes them out to people he says are in need of comfort. “My wife and I pray for all the people who we give the crosses to,” Czekala said. “We want them to feel comfort.”

Schramel said the man who gave her the pocket cross, Robert Shepherd, told her about its origin.

“He explained he had a friend in Wisconsin who makes them and that he was going to give them out for people he felt needed one,” she said. “Well, I’ve been going through so much stuff lately in my life he picked the right woman!”

Her story did not end here, said Schramel.

“I made a new friend that was sitting next to me and she took a picture of me with the cross,” added Schramel. “We started to talk and she took my number and she sent me the picture. Not only did I gain strength in my faith, but I met a really nice new friend. I was very lonely. It makes me cry every time I think about this experience.” 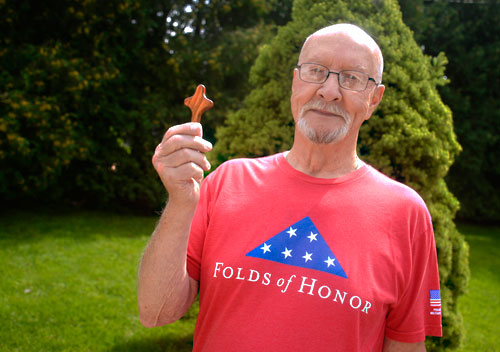 Dan Czekala, a member of St. Francis of Assisi Parish in Manitowoc, holds a pocket cross he made. (Benjamin WIdeman | For The Compass)

Her new friend, Gina, went on her computer and found Czekala’s story posted on The Compass website and sent it to Schramel. After reading it, Schramel said, “I wanted to thank Dan, the man who makes them, and all the thought and time he puts into making them. It has helped me so much and I have held on to it since I received it.”

Schramel said she contacted The Compass to share with others the impact Czekala’s pocket cross project has had on her.

“Thank you for letting me tell you this beautiful story, as small as it is, (about someone) giving me a wooden cross,” she said, adding one last detail. “I was having some trouble with my blood work results, but the doctor’s office called me this morning and everything was normal. The Lord is amazing.”