CHAMPION — Dozens of Catholic Scouts, dressed in blue and tan uniforms decorated with merit badges and emblems, were recognized for doing their duty to God and country at the 2019 Scout Mass held Sept. 7 at the National Shrine of Our Lady of Good Help. 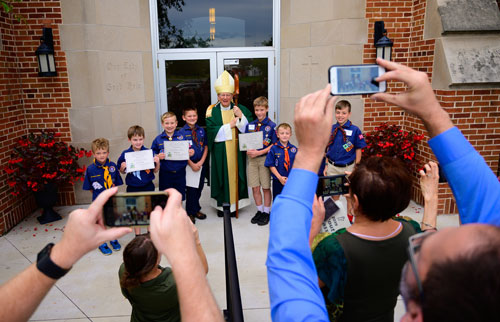 Bishop David Ricken poses for a photo with Cub Scouts who attended the 2019 Scout Mass for the Diocese of Green Bay Sept. 7 at the National Shrine of Our Lady of Good Help in Champion. (Sam Lucero | The Compass)

Bishop David Ricken, assisted by Fr. Daniel Schuster, an Eagle Scout, presented certificates to Scouts who have earned a Catholic emblem during the past academic year. Thirty-four Scouts, along with their Scout leaders and families, attended the Mass, which was followed by a reception outside of the shrine chapel. Also joining Bishop Ricken at the altar were Fr. Mark Mleziva, vocation director for the Diocese of Green Bay, Father of Mercy Thomas Reagan, shrine chaplain, and Deacon Larry Mastalish of St. Bernard Parish in Green Bay.

In his homily, Bishop Ricken told the Scouts that Scouting offers many important skills and values, including reverence.

“Reverence means respect for the dignity of God and the dignity of others,” he said. “It means being respectful to your parents, to your teachers, your brothers and sisters. … It’s those little things in life that build character and that’s what the Scouts is all about.”

While Scouting teaches survival techniques and other skills, Bishop Ricken said, “the important skill is the one where we realize or recognize God’s presence all around us — and even within us.”

He also encouraged the Scouts and their families to remember and pray for people in The Bahamas who were devastated by Hurricane Dorian. “We pray for our brothers and sisters, members of the Archdiocese of Nassau, that we may accompany and help them from our relatively meager sacrifices that we have to make to be Catholics,” he said.

Following Communion, Bishop Ricken blessed and distributed certificates that recognize completion of four religious medals available to Scouts: Light of Christ, Parvuli Dei (Children of God), Ad Altare Dei (to the Altar of God) and Pope Pius XII. A total of 64 Scouts from the diocese earned one of the emblems this year.

For the first time, a female Scout earned one of the religious emblems. Emily Miller, a member of Holy Name of Mary Parish in Maplewood, was one of 15 Scouts to earn the Parvuli Dei emblem. “I had to do a bunch of religious stuff at church,” to earn the emblem, Miller, a Weblo Scout, told The Compass. She is in her second year of Scouting.

Two Scouts, Dominik Brown and Brandon Rodgers, also received the Pillars of Faith Emblem from Bishop Ricken. This emblem recognizes Scouts who have earned all four of the Catholic religious emblems.

Brown told The Compass that he spent many hours studying to earn his Catholic Scouting honors. “It’s been a lot of work put into it to strengthen my connection to Christ and the Lord,” said Brown, a member of SS. Edward and Isidore Parish in Flintville.

This year’s Scout Mass recognized Fr. Roger Strebel, who died Feb. 18, 2019. Fr. Strebel joined the Scouts when he was 11 and earned the rank of Eagle Scout. As a priest, he was a life member of the executive board of the National Catholic Committee on Scouting and helped develop the workbooks Scouts use in attaining the Parvuli Dei and Ad Altare Dei emblems.

After the presentation of certificates, Chris Brandt, chair of the Diocesan Catholic Committee on Scouting, told the assembly that an activity patch created in 2017 to recognize Our Lady of Good Help has been accepted by the National Catholic Committee on Scouting as a national activity patch. Brandt then presented the first national patch to Bishop Ricken.

Since its creation, more than 100 activity patches have been earned by Scouts from nine states.