MANITOWOC — Holy Family College. That’s what Manitowoc’s four-year Franciscan Catholic institution of higher learning will be called from now on.

Previously known as Silver Lake College of the Holy Family, the private liberal arts college announced its renaming Sept. 19 during an “Unveiling a New Chapter” ceremony on campus. 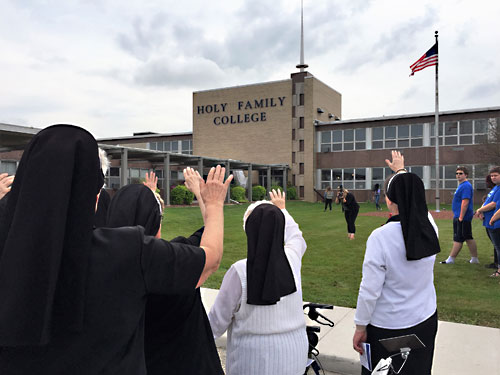 Franciscan Sisters of Christian Charity offer a blessing during the “Unveiling a New Chapter” event at Holy Family College in Manitowoc Sept. 19. (Suzanne Weiss | For The Compass)

Founded in 1935 as Holy Family College by the Franciscan Sisters of Christian Charity, the institution is reverting to its original name as it returns to it roots, said Dr. Robert Callahan, college president, addressing the group of about 100 people who attended the ceremony.

The name highlights the college’s Franciscan Catholic identity, which is grounded in faith, family and academic excellence, Callahan said.

“We always have been a Catholic college. … We just need to shine a very bright light on the core of who we are,” he said.

This refocused identity gives the college an advantage during a challenging time for small private colleges, Callahan said.

“I believe we will see a future where our college is not only surviving but thriving,” he said. “Achieving a thriving future begins with our name.”

Bishop David Ricken celebrated Mass prior to the unveiling. “Change is essential now and we all have to be a part of it,” he said in his homily. “It’s time to get on mission … and start saying, ‘How can I help?’”

John Russo, Holy Family College board vice chairperson, thanked the Franciscan Sisters of Christian Charity for their “unwavering commitment” to the college throughout its history.

The college’s forerunner was founded in 1885 by the sisters, who continue to sponsor the college to this day. Named Holy Family Academy and Normal School, it was located at the convent and prepared women entering the religious community for the vocation of teaching.

As the sisters expanded their educational goals, they added a wing to the convent and Holy Family College was born. The college, which began admitting laywomen in 1957 and became coeducational the following decade, was relocated to its present building adjacent to the convent in 1960.