APPLETON — The Widows of Prayer, a Catholic apostolate established under the directive of Bishop Robert Banks on Sept. 29, 1994, has been a meaningful and fulfilling vocation for more than 115 women since its inception.

On Sunday, Sept. 29, the apostolate, also known as a private association of the faithful, will celebrate its 25th anniversary with a 3 p.m. Mass celebrated by Bishop David Ricken at St. Francis Xavier Cathedral in Green Bay. The celebration concludes with a dinner at Riverside Ballroom in Green Bay. 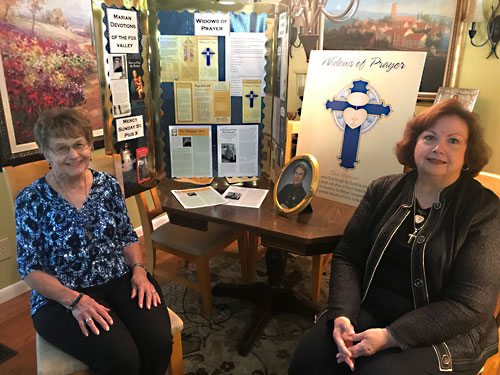 The Widows of Prayer was established in 1994 by Mary Reardon, who died last January. Since its inception, more than 115 women have joined the group, including Alice Peeters, left, and Carlotta Stricker, who is the group’s servant leader. (Amanda Lauer | For The Compass)

Carlotta Stricker, who is a member of St. Joseph Parish in Appleton, took vows with Widows of Prayer after she lost her husband a decade ago and is currently finishing up her last term as their servant leader. She described the origin and purpose of their association.

“Mary Reardon, who passed away in January 2019, started Marian Devotions of the Fox Cities with her husband in the early 1980s,” she said. “They came together every Monday to pray to the Blessed Mother for priests and Catholic leaders and for more seminarians to be ordained. After her husband passed away, Mary knew she was being called to start a religious community.”

The idea was to create a community similar to the Order of Widows, said Stricker, which church tradition says began with the Blessed Mother following Jesus’ crucifixion.

“Our apostolate … is made up of women who have had a valid marriage recognized by the Catholic Church and who are now widows. Currently, we have 62 living Widows of Prayer,” said Stricker.

The charism of Widows of Prayer is to serve Christ through his church by praying for priests and others in church leadership, to be devoted to the Blessed Sacrament and to promote the adoration of Christ in the Eucharist. The members have a special devotion to the Blessed Virgin Mary, St. Catherine of Siena, St. Monica and St. Elizabeth of Hungary.

At that time, they are given the option to make a private vow of consecration, which is simplicity, chastity and obedience. Rather than wearing a habit, after the first promise is made, the candidate is awarded the Widows of Prayer insignia pin.

Generally, the women interested in being a part of Widows of Prayer already have a prayer-filled life, said Stricker. Depending on their health and age, it is suggested that they commit to praying the Liturgy of the Hours in the morning and evening, attend daily Mass and receive the Eucharist daily, participate in adoration of the Blessed Sacrament at least once a week, observe Holy Hour, recite the rosary and do daily Scripture reading and contemplative prayer.

“These women are already doing (most of those things) but after committing your life to the Lord, it expands in a way that’s even hard to identify,” according to Stricker. “I thought I was a good Catholic and did everything I could possibly do prior to becoming a Widow of Prayer, but in the last 10 years my prayer life has gone way beyond anything I did in the past.”

The members live in their own homes but come together to pray on a regular basis.

“Each community of Widows of Prayer generally gets together once a week,” said Stricker. The Appleton group meets every Thursday at St. Pius X Church for adoration at 4 p.m., followed by Liturgy of the Hours, benediction of the Blessed Sacrament and Mass. They gather on the first Saturday of each month for Mass and breakfast. “Quarterly, we send out an invitation to the newly widowed in the area to attend a Mass for their husbands with a breakfast following,” added Stricker.

While Appleton is considered the “motherhouse” of the Widows of Prayer, they now have communities in six different cities across the United States.

“We have branched out from shore to shore. We have a lot of remote Widows of Prayer,” said Stricker. “If there isn’t a community near them, they become part of the closest community. We also have women who can’t be a Widow of Prayer, but they believe in what we do and who we are. They are called Friends of Widows of Prayer and join us for prayer sessions, for breakfast, for our retreats.”

As Stricker’s last term is winding down, Alice Peeters, a member of St. Mary Parish in Menasha, is considering stepping up to take over as servant leader. “With the passing of my husband, I honestly felt I needed more in my life, more spiritually,” said Peeters. “It took me about eight or nine months to decide if I wanted to go ahead with it, but I have found a lot of fulfilment in it.”

Joining an association of the faithful wasn’t something Stricker foresaw when she retired. Instead, she expected to travel. “I enjoy traveling because that’s what I did for my career. Now my traveling is going to our communities once a year to do chapter meetings and also we’re invited to parishes to talk about Widows of Prayer. This has become my life.”