LITTLE CHUTE — “You are there for others” is the way author Jesuit Fr. Thomas Sweetser said Pope Francis would define ministry.

“Francis keeps things simple,” Fr. Sweetser said during a presentation about his newly-released book, “Can Francis Change the Church? How American Catholics Are Responding to His Leadership,” Oct. 7 at the Little Chute Public Library. His visit was part of the annual Fox Cities Book Festival. 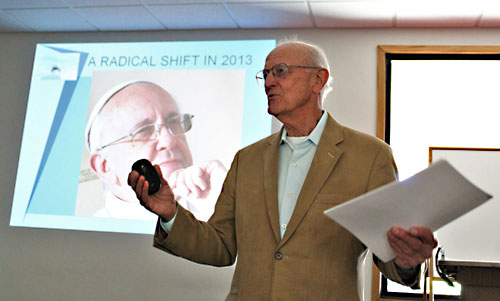 Jesuit Fr. Thomas Sweetser discussed the influence Pope Francis has had on the church and society during a presentation Oct. 7 at the Little Chute Public Library. The Milwaukee priest is author of “Can Francis Change the Church? How American Catholics Are Responding to His Leadership.” (Brad Brikholz | For The Compass)

Pope Francis talks about going out to the streets and encountering people, said Fr. Sweetser. “The most important icon in our churches is the exit sign. It tells us to go out there,” he said, adding that faith is for others and “we need to let them in on it. The best part is we don’t have to do it alone.”

The priest-author is a member of the USA Midwest Province of Jesuits, which he entered in 1957. He currently lives in Milwaukee and founded the Parish Evaluation Project in 1973, where he continues to work as a facilitator and consultant to parishes across the country. His work with the project helps pastors, staff and lay leaders welcome people into inclusive communities, create meaningful worship experiences, foster occasions for spiritual growth, and provide opportunities for outreach and service ministries.

His book about Pope Francis did not start out as a book about this pope or his impact on the church and ministry. Rather, he set out to discover more about unhappy Catholics. Working with parishes for 46 years, he said, he saw how people who were once very active in their church had drifted away, and he wondered why.

“Some were still in the church, but not active; some only went to Mass occasionally. Others went to other denominations,” he said. In 2010, he decided to survey Catholics who either left the church or had reduced their participation.

He surveyed 55 people who were either baptized Catholic as infants or entered the church at some point during their lives. Of these, 31 were still Catholic but not active, and the others had left the church. He conducted his interviews in 2011 and 2012.

“The book was ready to go in 2013, and then things started happening,” he said.

After the College of Cardinals elected Pope Francis, a Jesuit with a heart for the poor, Fr. Sweetser said he knew he had to rework his manuscript. He conducted another round of interviews in 2017 to see how those he surveyed earlier felt Pope Francis had impacted them.

“With Pope Benedict XVI,” he said, “people were in the throes of anger. There was a lot of questioning and turmoil. That is why many of them left. People felt alienated from the institution (of the church) and felt the lines around what is Catholic were finely drawn. They talked about a lack of direct action, sexism and white privilege.”

When asked why they stayed in the Catholic Church despite their dissatisfaction, people said the liturgy outweighs the hierarchy and God is bigger than the hierarchy.

“Then something happened,” he said, adding that, with the help of the Holy Spirit, Pope Francis ushered in a new era. “They saw someone more interested in inclusivity, someone seeking solidarity with the poor of the world,” he said about the interviewees.

“One person said, ‘It is easier to say yes, I am Catholic’ and be proud of it.” Another called Francis “a breath of fresh air” who “goes back to the way Jesus did things,” he said.

“It was a new direction in the church – one with a focus on the poor and needy, caring for Mother Earth, seeking a new transparency and being more ecumenical,” Fr. Sweetser said. “And, he recognized the messiness of life, such as divorce, and was able to bring people back to the sacraments.”

The pope’s strength is influencing people’s personal lives, according to Fr. Sweetser, and all of this is done with a sense of humor.

Responding to the title of his book, “Can Francis Change the Church?” Fr. Sweetser said, “If we are the church, then his example is changing people’s lives and shifting priorities. He is renewing the church – and that is us. People may not be coming back yet, but they are listening. They feel he has impacted them.

“Francis has an impressive care for and attention to the individual rather than to church rulers,” added Fr. Sweetser. “He says, ‘Go out to the street, smell like sheep.’ Finally, he says we need to treat everyone like they are a child of God. … He is begging us to join him and we are blessed to have him as our pope. He is calling us to holiness.”