MANITOWOC — The word “missionary” often conjures up visions of Americans venturing to exotic locales to do God’s work.

Gerald and Melody Martins, who are from Mumbai, India, have turned that idea on its head. The Martins live in Cato, just 20 minutes west of Manitowoc, and have been serving in the Diocese of Green Bay since 2017. 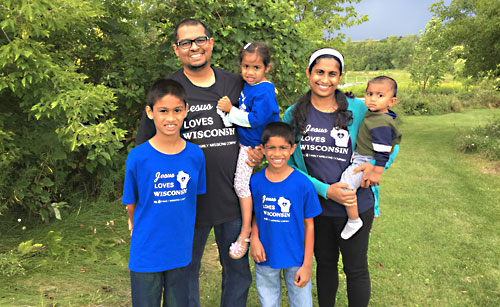 Gerald and Melody Martins, missionaries from India now serving in Cato, located in Manitowoc County, stand outside of their home with their children Elijah, 8; left, Elliana, 3; Ethan, 7; and Evan, 1. (Suzanne Weiss | For The Compass)

“When we first came here it was winter, so that was a challenge,” said Gerald with a laugh.

The Martins grew up Catholic and met in 1998 through a Catholic youth group while studying at St. Xavier’s College in Mumbai. Gerald, 39, is a professional photographer, and Melody, 38, is a Montessori educator who taught preschool for more than 12 years. They have four children: Elijah, 8; Ethan, 7; Elliana, 3; and Evan, 1.

Ironically, when they started their family and were enmeshed in their careers, they began moving away from church, Melody said.

That changed in 2014, when they met people who introduced them to the Family Missions Company, an apostolate of lay Catholic missionaries. A month later, they attended the group’s retreat.

“Our plans were really different after that retreat. God moved and spun us around,” Melody said. “We came back to our faith at that the point,” Gerald said. “We had this burning desire to follow Jesus and proclaim the good news.”

They trained with the Family Missions Company in Louisiana and initially served in the Philippines. “When we returned to Louisiana, we felt very strongly that the Lord wanted us to stay in the states,” Gerald said.

The Martins took one more detour before ending up where they are today.

They visited Rome in December 2017 and were inspired when they heard Pope Francis address thousands of people who turned out for the Catholic Charismatic Renewal’s golden jubilee. The Martins also had a layover in Lisbon, Portugal, and visited Fatima, where the Blessed Virgin Mary appeared to three shepherd children in 1917.

Not long afterward, they were invited to the only church-approved Marian shrine in the United States, the National Shrine of Our Lady of Good Help in Champion, where they heard Bishop David Ricken give a homily about evangelization and healing.

What some might consider a series of coincidences, the Martins saw as God’s way of pointing them in the right direction. “Everything seemed to line up with what God was calling us to do,” Gerald said. “He was literally putting all the pieces together and making them happen,” added Melody.

The Martins found Wisconsinites to be friendly and helpful, and followed up on the opportunity to live in the home of Andy and Christel Schmidt, who are serving in New Zealand through Family Missions Company.

Gerald and Melody are focused on evangelizing, as well as serving the poor. “One challenge we have is we don’t see a lot of people who are physically poor, but there’s a lot of spiritual poverty,” Gerald said.

They want people to realize that they can rely on God, Melody said.

In conjunction with Holy Family Parish in Brillion, the Martins are active in Alpha, an evangelization program for exploring the Christian faith. They invite people into their home or area coffeehouses for the sessions, which include a meal, a video, and small group interactions. Gerald also uses his skills to shoot and edit videos of believers giving their testimonies.

Gerald and Melody provide a prayer ministry at their Brillion church, where they pray with people who have spiritual needs or physical afflictions. People who are comfortable praying in church are sometimes hesitant to take part in this type of prayer, Melody said, but “we’ve seen people grow as they accept the gifts of the Holy Spirit.”

As part of their ministry, the Martins host Family Missions Company missionaries, spearhead ecumenical efforts and work with local organizations in evangelization, renewal and service, including jail ministry.

Gerald is a student at the Encounter School of Ministry in Brighton, Mich., which focuses on evangelization and using the gifts of the Holy Spirit. In addition, he is president of the Diocesan Charismatic Renewal Center service committee, which is designed to help “bring to life Pope Francis’ desire of a Holy Spirit-filled life for every Christian,” he said.

“We also have other ministries such as talks, retreats and impromptu things that we do … such as visiting the sick and the elderly, offering prayer ministry for healing and spiritual direction,” said Gerald.

A new challenge for the family will come in May, when their hosts return to Cato and the Martins will need another place to live and a vehicle in which to travel.

“We feel called to stay in Wisconsin,” Gerald said. “We are encouraged to see how God is working through us.”