STURGEON BAY — As a wife and mother of two children with a full-time job as a civil engineer, Renee Borkovetz knows the meaning of the word “busy.” The result, she admits, is that her prayer and spiritual life had become neglected.

“I felt like I needed to be doing more,” she said. 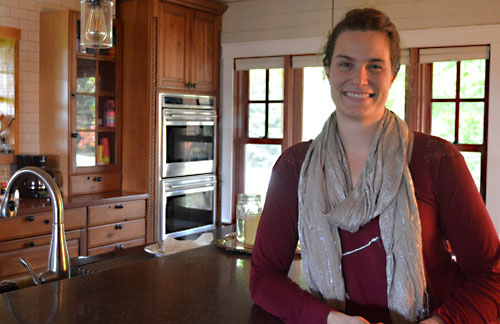 Your Catholic Neighbor: Renee Borkovetz (Monica Sawyn | For The Compass)

Her “more” ended up being the Living Book Club that she started and hosts in her home. The eight to 10 young adults meet on the first and third Tuesday each month. Her husband, Scott, looks after 6-year-old Ashley and 4-year-old Ellie during that time — and any of the children participants might bring along.

This all started when her sister invited her to attend a Christian Encounter Weekend in Denmark last February.

“That kind of got the fire burning, but I wondered what exactly I could do besides being better at church, more diligent in prayer and more aware,” Borkovetz said.

At the same time, she and her husband attended a Financial Peace University seminar put on by the Green Bay Diocese in Sturgeon Bay. The host, Katrina Welborn, is also the coordinator for Door County Catholic Young Adults, and she asked Borkovetz if she would like to be involved in some way.

“Reading is one of the things I enjoy doing, so a book club was a good fit,” she said. “I said ‘yes’ because I want it and someone has to coordinate it. I wanted it to be something sustainable and ongoing and continuous.”

Over the years, Borkovetz has read a lot of self-help, self-improvement books, which she said is typical of young adults these days. Seldom do those books address spiritual things, however. The Living Book Club intends to fill that niche.

They started in September with “Perfectly Yourself: Discovering God’s Dream for You,” by Matthew Kelly, a book she felt would cover basics but not get too deep, since she had no idea who would respond to her invitations.

Borkovetz chose to host the club in her home, rather than in a church setting, because she anticipated that many of the respondents might not be going to church. She was right. This way, they can gather in a comfortable family setting which is also a “safe place” for sharing spiritual things that can’t be shared at work or even among friends.

“Our mission is to meet people where they are,” Borkovetz said. “A lot of young people are looking for something, but they don’t know what they’re looking for, and therefore they try to find it everywhere else, when in reality it might be something as simple as saying a prayer.”

Borkovetz said some of the participants say they don’t believe everything the church teaches and “that’s a big struggle.” She doesn’t always have the answers for questions that come up, but she encourages them to search on their own, to take it to prayer, and she tries to keep resources on hand.

Borkovetz said the book club keeps her accountable because she has to prepare and can’t be “too busy” to read for each session.

“Plus, I do want to keep learning and growing myself, and I do feel like I’m growing in my faith and prayer life,” she said. “It’s also helping me to interact with people and learn how to be more open and inviting to others.”

Borkovetz said that in the workaday world, it’s easy to be focused on yourself and to meet others only on a superficial level. So, the goal for this club has been to have an avenue or platform to meet on a deeper level, get to know each other, challenge each other, and gain support from the resulting community.

Borkovetz had assumed leadership positions in the Newman Center when she was in college, and finds that was a good preparation for organizing and leading this book club. She said it gives young adults a place to belong without having to take the first step themselves.

When asked what parishes can do to reach out to adults of her generation, Borkovetz had some suggestions: a question-and-answer session with the pastor, speakers that address topics like learning the Mass or explaining the Creed, and scheduling events in the evenings. She also suggested putting notices on the grocery store bulletin board or other places besides the church bulletin. Borkovetz got some response by creating a Facebook event page that she sent to her friends, which allowed them to repost it to their friends.

“One man who comes emailed me after the first time and said he enjoyed himself and was excited to continue reading the book,” she said. Then she laughed. “I think it’s very positive when they keep coming back.”