Women say God opened doors for them, so it was time to do same

ASHWAUBENON — Heidi Lemke and Kari Trzinski, members of St. John the Baptist Parish in Howard, believe that God has opened doors for them and their families. This fall, the two friends and business partners decided to do the same for others.

Lemke and Trzinski own Green Bay Olive Oil Company, located in a strip mall off of Oneida Street, four doors west of the Planned Parenthood clinic. Every year, dozens of people participate in silent, prayerful vigils on the sidewalk adjacent to Oneida Street as part of 40 Days for Life. 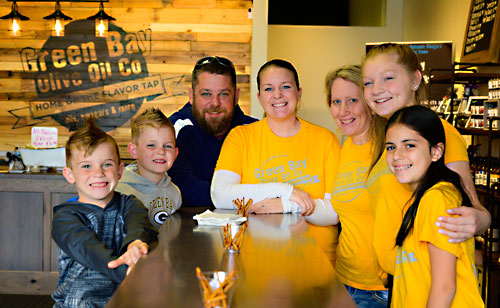 Kari Trzinski, center left, and Heidi Lemke, center right, owners of Green Bay Olive Oil Company in Ashwaubenon, pose for a photo with their families. From left are Kari’s sons, Elliott and Harry, and her husband Ryan. Standing next to Lemke are her daughter, Alexis, and her foreign exchange student Marcela de la Cruz. The women hosted a reception for 40 Days for Life participants on Sunday, Nov. 3, the final day of the group’s prayer vigils. (Sam Lucero | The Compass)

After Lemke learned about the silent protests from Deacon Dave and Denise Parker of Pulaski, she and Trzinski decided to open their store’s doors to walkers who needed a bathroom, a place to rest or something to drink.

On Sunday, Nov. 3, the two women hosted a reception for 40 Days for Life participants as they concluded their fall walking vigils.

“What they are doing is so wonderful for everybody, because they are showing these women or these families that they have other options” than abortion, said Lemke. “If we can help in any way, just to save a life, that would be great. Kari and I feel very strongly about that.”

“They have a mission, the same way Heidi and I have a mission,” said Kari. “We love our Catholic faith for what it has done for us personally, professionally, and how it truly builds community. We feel that’s what Jesus is — he is all about helping people in any and every way.”

According to Lemke, an open door is a sign of welcome and love.

“I think anyone would want a door to be open for anyone else, because that’s how you are going to show them God’s love,” she said.

Both Lemke and Trzinski say they are testaments of doors being open to God’s love — and it was their children who helped walk them through those doors.

Alexis Lemke, 13, who is an eighth grader at St. John the Baptist School in Howard, led the way for her parents.

Alexis was diagnosed with leukemia when she was 2 years old, and battled the disease for nearly three years, said her mother. Heidi and her husband, Marc, attended another church while Alexis was dealing with cancer, but they did not receive support from the faith community, said Lemke. 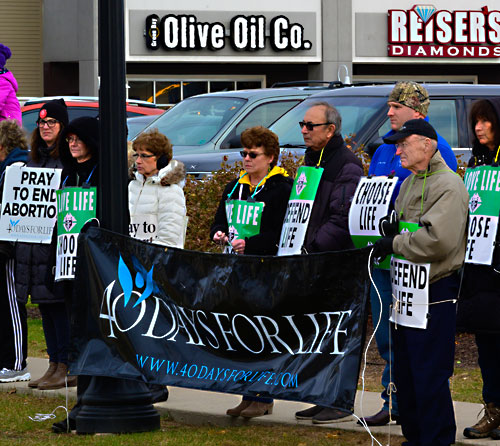 Participants in the Green Bay 40 Days for Life prayer vigil stand along Oneida Street Nov. 3. Behind them is a sign for Green Bay Olive Oil Company, owned by Heidi Lemke and Kari Trzinski of St. John the Baptist Parish in Howard. The women opened the doors to their store to vigil participants this fall. (Sam Lucero | The Compass)

“We have always been spiritually strong in our family,” she said. “At the time, we belonged to a nondenominational church. … We were so alone, except for the few friends we had. I think that’s what hurt really bad then, too, is we did not have the church support that would have helped so much.”

When Alexis was in sixth grade, she missed nearly two months of school while doctors were trying to diagnose the cause of her severe stomach aches, said Lemke.

Two weeks before entering seventh grade, Alexis asked her parents if she could be homeschooled. “Fighting cancer for three years, she was primarily around adults,” said her mother. “She’s like a 13-year-old walking around in a 23-year-old’s mind. The drama that kids go through today is just overwhelming. For her it’s, ‘Let’s just get along.’”

Alexis had a friend who attended St. John the Baptist School, so the Lemkes decided to contact friends from the parish, Sarah and Bill Wulf. “My husband used to work with Sarah, so they were already in our lives. The Wulfs helped set up a meeting with the principal, Andrew Malloy.

“My husband and I were impressed and we signed Alexis up,” she said. The first week of school, “she got home and she was thanking my husband and me because she was so happy. She loved it so much. The teachers were just so giving and kind and wonderful. … They said, ‘If you don’t feel good we will pray with you. If you have concerns, we will work with you.’”

The school’s atmosphere of care and concern for Alexis was a life changer for the family, said Lemke.

“It’s come to the point now where she will literally… be in excruciating pain on a Sunday night and she wants to go to school Monday because she just loves being there,” she said. “So for my husband and me, it’s like taking so much off of our shoulders and giving it back to God and then letting him be in control and let Alexis know she can do it.”

That experience led the Lemkes to begin attending St. John the Baptist Church. Weeks later, they enrolled in the Rite of Christian Initiation of Adults (RCIA) to start the process of joining the Catholic faith.

“When we started attending church, everybody just accepted us and welcomed us and it was like you really did fit in,” said Lemke. “In some of the other churches, I don’t know if I ever felt like I fit. … Once I went through RCIA and figured out why we do what we do and all of the different customs, it’s been amazing. It’s just like, a door opened and the sun was out.”

Alexis was baptized on April 17, 2018, with her seventh grade class in attendance. The entire family received their first Communion at the Easter Vigil in 2018.

Lemke said the door that opened to joining the Catholic faith was part of God’s plan. “I believe we were taken down this path, for us to find this church, find this beautiful faith,” she said.

For the Trzinskis, the door leading to renewed faith was opened by their son Elliott, who is a third grader at St. John the Baptist School. A deep desire to pray in school for his classmates led Kari and her husband, Ryan, to enroll Elliott at St. John last year.

“Elliott was at (a public school) for kindergarten and first grade,” said Trzinski. “There were students who were experiencing poverty and being bullied and he didn’t like that, so he just felt he wasn’t giving enough help. So when he talked to his father and me, we were like, ‘You know who really helps us is Jesus, so you should pray to him.’ Before we knew it, he ran with that and has been praying ever since.

“When he enrolled at St. John the Baptist, he brought us back to church,” added Trzinski. “As his parents, we are his role models and this is what we want to practice and instill in him, so it forced us to really participate and really be involved with the church.”

Another door opened when the two young mothers met at a parish women’s retreat in October 2018. Both were reluctant to attend the weekend retreat, but were persuaded to do so by their husbands. Once they met, Lemke and Trzinski found they had a lot in common. Trzinski owned an online company, Good Fats, which was a precursor to Green Bay Olive Oil, and Lemke had a marketing background. The two began talking about the business and it led to their families forming a business partnership. 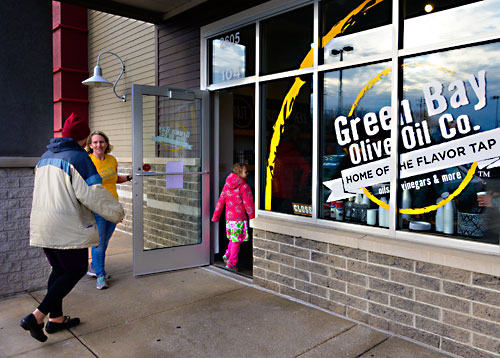 “I was looking for something that I could start doing to earn money again and we really believed in what she and Ryan created here,” said Lemke. “We just clicked and God had a plan. We partnered in January, we found this location in March and on June 6 we opened up.”

The women’s retreat, along with her son Elliott’s desire to pray and his enrollment at St. John School were life-changing experiences, said Trzinski. Her youngest son, Harry, is in kindergarten at St. John’s.

“Now we pretty much go to church at least once a week, we pray together as a family,” she said. “We are practicing more of our Catholic faith than we ever have. We did that 10 years ago, but we just didn’t make it a priority. Elliott helped us make it a priority.”

A year of doors opening

It has been a year of doors opening and entering into closer relationships with God, the women said. Opening their doors to 40 Days for Life vigil participants was a natural next step.

“We are so grateful for the entire journey,” said Trzinski, “from the day we met to how our lives have completely changed for the better in a year’s time. To us, it’s God’s way of building us for what is about to come and that’s how we kind of measure our trials. It’s a miracle I was able to find Heidi, it’s a miracle that our business is growing, it’s a miracle that we have come across a community that we have, and I completely feel that it is God’s fingerprints that made this happen. I can’t wait to see what unfolds as it keeps going.”