GREENVILLE — Santa isn’t the only one busy in his workshop this time of year. Denis Ebben is spending his spare time crafting wooden cribs for the fourth-grade students in his faith formation class at St. Mary of the Immaculate Conception Parish.

“I give the kids in my faith formation class a gift for Christmas every year,” said Ebben, who has been teaching faith formation to grade-schoolers at St. Mary for 15 years. “I go to St. Patrick’s Gifts & Books in Appleton and buy the baby Jesus and put him in some straw in the crib.” 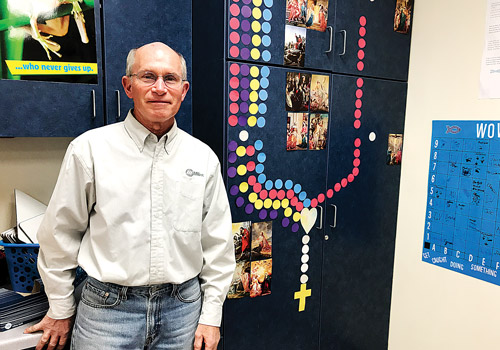 Your Catholic Neighbor: Denis Ebben (Amanda Lauer | For The Compass)

Ebben got the idea to make the cribs from his daughter, Sr. Vianney, who is a Franciscan sister with the Sisters of St. Francis of the Martyr of St. George, based in Alton, Ill. Sr. Vianney, whose birth name is Holly, taught faith formation classes at St. Mary while she attended college at UW-Fox Valley, before transferring to Silver Lake College (now Holy Family College) in Manitowoc.

“She’s always thinking of new ideas,” said Ebben. “She asked me to make the cribs for her class when she was teaching here.” He described the process of creating the cribs. “I cut a bunch of little pieces of wood, glue them together and sand them. It takes me quite a bit of time to make them.”

Sr. Vianney was also the one who got Ebben involved in teaching religious education. “She was helping with summer Bible school and she and I would walk a lot together after work and school,” he said. “She was always telling me about teaching religion. When you see someone else having a good time and then join in something, you kind of want to do that, too.” When Holly moved to Manitowoc, Ebben decided to step in to fill the void she left at St. Mary.

In the past 15 years, Ebben, who is a Greenville native and has attended St. Mary Parish his entire life, only took off one year from teaching. Two years ago, he stepped away from teaching fourth-graders to teach faith formation one-on-one to his grandson Gavin, who was a freshman at Appleton West High School at the time.

Gavin’s dad — Ebben’s son Tony — had been away from the faith for a number of years. When Tony decided go through the RCIA program three years ago and be confirmed, Gavin chose to join the church as well.

“I went to Gavin’s house every week. St. Mary’s faith formation coordinator Barb Tate got me some books for his age level to study for baptism and reconciliation. He got baptized two years ago,” said Ebben.

Teaching isn’t the only volunteer work Ebben does for the parish. “I’m a sacristan on Sundays and eucharistic minister and usher. On weekday evening Masses (Thursdays during the school year and Tuesdays and Thursdays in the summer), I’m an altar server and sometimes I lector,” he said.

He also holds numerous roles as a member of the Knights of Columbus.

“Also, with the Knights of Columbus, I volunteer serving a meal at the warming shelter once a quarter. I help with Punt, Pass and Kick, the Tootsie Roll Drive, and the porky and pancake breakfast we have once a month during the school year,” he said.

Through his employer, Miller Electric, where Ebben has worked 46 years, he teaches a Junior Achievement class each spring for six weeks to the sixth-grade students who attend St. Mary Elementary School. Between Thanksgiving and Christmas every year, he volunteers at the food pantry in Dale.

During this time of year, people tend to focus on what they’re thankful for. But, for Ebben, it’s a year-round sentiment. “Be thankful  to people for the things they do and also be thankful to God,” he said. One thing Ebben is particularly thankful for is having the chance to share his faith with children from his parish. “At the end of the class, when the kids are leaving, I usually meet them at the door and tell them, ‘God loves you,’” he said.

Sharing one’s faith isn’t always the easiest thing to do, but it comes naturally to Ebben when he’s working with children, he said. “We feel a bit uncomfortable talking to adults about faith things, but in the classroom with the kids I feel real comfortable talking about anything with God and the saints and with their faith,” he said. “The kids really seem like they want to acquire religious knowledge. That makes you kind of feel like, ‘Hey, you’re really doing something good.’ It’s probably a call from God that he wants me doing that.”